Why I’m Optimistic about Ukraine’s Reforms in 2017 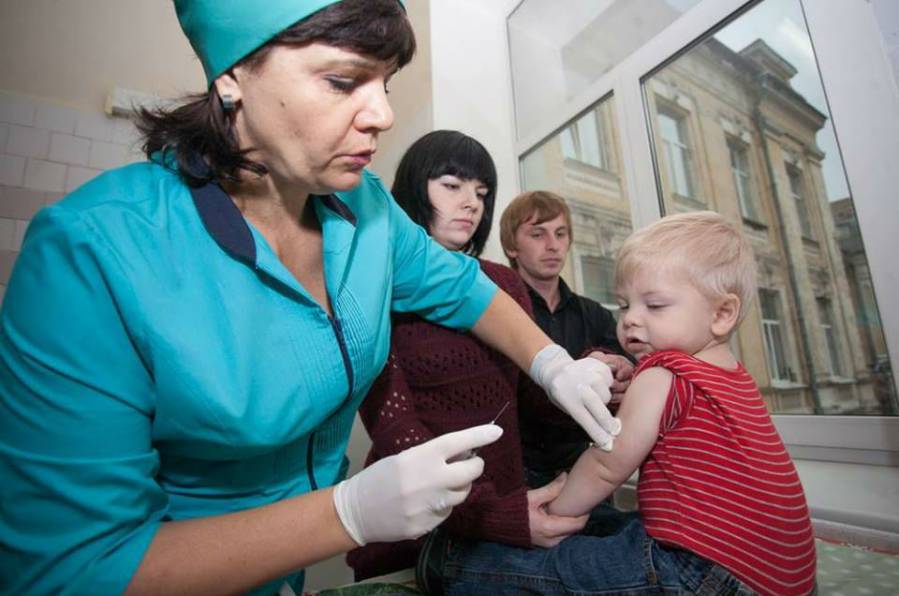 A child in Vinnytsia, Ukraine, receives an influenza vaccination on October 31. In Dnipropetrovsk and Vinnytsia, reformers in 2016 experimented with a new system of primary care; doctors signed contracts with patients and funding was allocated based on the services provided. Credit: Ministry of Health of Ukraine

Following decades of neglect, there is real progress in Ukraine’s healthcare sector. Thanks to the efforts of reformers in the Ministry of Health, pressure from civil society, and the support of international donors, the sector is seeing reduced corruption and clear prospects for reform.

The healthcare sector had been a magnet for large-scale corruption for decades. The Global Fund’s suspension of its program in Ukraine in 2011 because of procurement corruption was indicative of the situation. Virtually all state procurement of medications was stalled in 2013-2015 over corruption concerns. Following the Euromaidan, the new government made a radical decision: only the UNDP, UNICEF, and the international company Crown Agent could procure major medications for the state. It worked: A recent Ministry of Health report indicates that procurement through these international organizations since the initiative began in 2015 has saved over $4 million, which is now being used to purchase additional medications and medical supplies.

The new procurement system has also allowed Ukraine to establish a reserve for vaccines. “Buying vaccines has been a reliable source of corruption for some health professionals and pharmaceutical companies in the past resulting in expensive and unattainable vaccines for most Ukrainians,” said Michael Getto, a Kyiv-based international public affairs consultant.

Since independence, there have been numerous attempts to reform Ukraine’s healthcare system; they have usually aimed to introduce large legislative initiatives, with unclear prospects of implementation. The new Ministry of Health team lead by Ukrainian-American Ulana Suprun took a different approach by focusing on low-hanging fruit, and it has already brought important improvements.

For example, in September the Cabinet of Ministers canceled Soviet-style Decree 33, which limited the discretion of hospitals in determining personnel needs, and on November 30 it gave hospitals greater discretion in managing their spending. Skeptics argued that the hospitals were not ready to make planning decisions on their own. However, the reform’s outcome has proved them wrong. Cancellation of the decree has paved the way for hospitals’ increased independence and improved planning efficiencies.

In contrast to previous attempts at reform, the Health Ministry has demonstrated an open and inclusive approach. It has cooperated with the public, other government reform programs, and the international community to build on such important projects as the establishment of the unified healthcare information management system, e-Health. The ministry admitted that the government is not able to do this task alone, and signed a memorandum of cooperation with IT companies, the e-governance reform agency, and experts, to jointly modernize the healthcare system.

The ministry recently unveiled its three-year healthcare reform plan that would bring Ukraine’s healthcare system more closely in line with European practices by transferring most patient care from hospital treatment to primary care and prevention, increasing the efficiency of healthcare spending, stimulating better practices among doctors and hospitals, and ensuring citizens’ access to a package of primary healthcare services free of charge.

Specific plans for 2017 include establishing contracting mechanisms for primary care in line with the principle “money follows the person,” and turning away from the current inefficient funding mechanism based on the number of hospital beds. All public healthcare services will be administered by one institution, the Public Health Center, which will develop healthcare contracts with hospitals for budget-funded healthcare services.

Additionally, in line with the decentralization reform being pursued by the current government, hospitals should begin to exercise greater local control over the healthcare systems servicing their communities. In Dnipropetrovsk and Vinnytsia in 2016, reformers experimented with a new system of primary care that was successful; doctors signed contracts with patients and funding was allocated based on the services provided. The government took the flexible and reasonable approach of allowing regions to define the best model for them, and this approach will be expanded in the new year.

The picture isn’t perfect, however. The current discussion about the 2017 budget has highlighted the risks of an “unfunded mandate” in the healthcare sector, in which the responsibilities transferred to the local level from the central budget do not have a matching revenue source at the local level. Regions are at risk of facing difficulties of funding energy bills and maintenance of healthcare institutions servicing their communities.

As the ministry’s reform team embarks on a comprehensive overhaul, it will need to ensure a wider political consensus and consolidated political will across political parties. MPs on the Rada’s Health Committee, including deputy chairman Oleh Musij, have voiced concerns that the progress achieved so far is not yet irreversible. Musij, a doctor-activist who came to politics following the Euromaidan, says that in order for the healthcare system to be permanently modernized, the reforms must be fixed in legislation, and he’s right.

Oksana Bedratenko is an independent analyst based in Washington, DC; she formerly served as the Senior Local Economist at the US Embassy in Kyiv. She tweets @Bedratenko.