Trump is on collision course with international law over CrimeaTrump’s man in Moscow claims ‘misinformation’ about Crimea, Ukraine was ‘catastrophic’ & sanctions don’t workWhy a Trump Victory Would Put Ukraine in Danger. In Trump’s Own WordsMark it down, Mr Trump, Russia has already gone into UkraineNo surprises as Trump says he could recognize Crimea as ’Russian’ & lift sanctionsA British Foreign Secretary who excuses Russia’s invasion of Crimea?Kremlin’s Donbas proxies congratulate UK for ’doing what they did’ & voting for BrexitBrexit a gift to Putin, the far right & Trump, a blow to democracyEx-Mayor of London Boris Johnson blames Russia’s annexation of Crimea on the EUWhat European Values if Dutch Referendum Result Stands?Appeal by the leaders of Ukrainian national communities to the Dutch populationFormer Soviet political prisoners call on Holland to say yes to Ukraine’s European futurePlaying with fear and ignoranceHow a democratic tool became a threat to democracyUkrainian Jewish leaders appeal to Holland: Give our country the chance to break with the pastDutch referendum puts Ukraine in spotlightCrucial victory for Ukraine in ECHR case against Russia over Crimea Why would Russian Wikipedia censor information on the Donetsk Izolyatsia secret prison?2020: There was no worse year in the realm of human rights after the Revolution of DignityBandera. An Invitation to a Calmer Conversation
• Topics / Politics and human rights 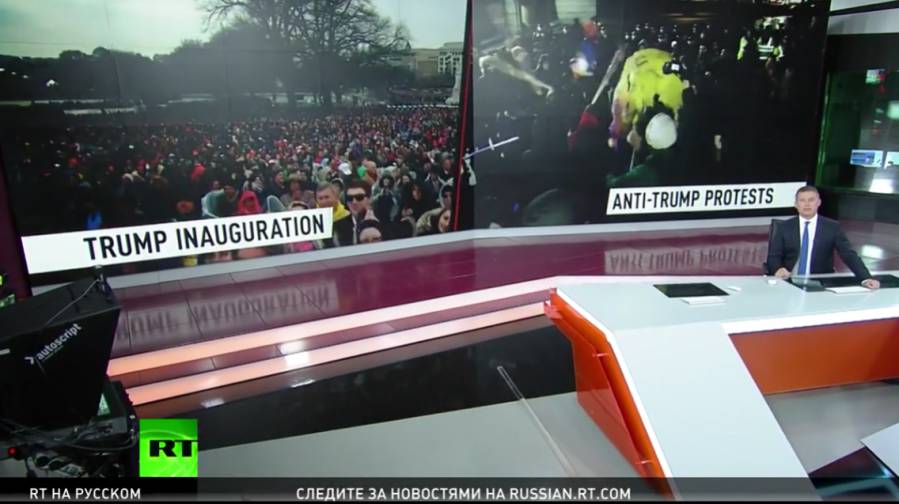 Russia broke with a tradition extending far back into Soviet times this weekend.  Anti-government protests are normally top news for pro-Kremlin media, but not this time. News of First Lady Melania Trump’s venture onto Twitter got more headline coverage on at least one website, and the photos everywhere appeared carefully selected to conceal the vast numbers involved.

It is not, of course, the Russian media that Trump himself and his press secretary Sean Spicer attacked, but the US media which Trump alleged to have been ‘dishonest’ about the number of people at his inauguration.  That would be an extraordinary media conspiracy, since the drone images and videos on all internationally renowned media sources are united in giving the lie to the inflated numbers Spicer mentioned.

Let’s hope that civic and media groups are monitoring how the news of half-a-million strong demonstrations were presented on pro-Trump channels in the USA.  They would be well-advised to also scrutinize RT and Sputnik International, and to ask why all Russian government-controlled media seemed so united in trying to underplay and / or distort news of unprecedented protests around Trump’s inauguration.

On Inauguration Day, the focus on the relatively small number of violent incidents was nothing new, though even here the attempt was clearly to present any protest as being by ‘trouble-makers’.

When there are hundreds and thousands of people peacefully demonstrating in Washington, New York and numerous other cities, it’s much harder to speak only of ‘trouble-makers’.

Easier to not show the photos at all, or show them from an angle which gives no indication of the scale.

The Kremlin-funded Russia Today, or RT in Russian on Saturday had a headline saying: “I can’t tell you straight off”. RT asked anti-Trump protesters why they were protesting”.  The text claims that their correspondents spoke with demonstrators who were unable to give sensible reasons for their participation.  This is after footage showing violence and claiming that protesters threw stones, etc. at police.  This, it should be stressed, was from a report on January 21, with the time recorded as 21.45.  By that stage, over half a million had gathered in Washington, and hundreds of thousands in other cities.  Reports from other media, as well as direct streaming from the demonstrations, gave no reason to believe that people did not know why they were there, and the vast majority of people were peacefully expressing their views.

Many of the reports about the Saturday demonstrations focused on Madonna’s speech.  Life News tried particularly hard to make a sensation out of it with the headline “US secret service will initiate an investigate over Madonna’s threat to blow up the White House”   The report mentions that she used bad language about Trump several times, and that “she had thought of blowing up the White House”.

It is difficult to understand what the ‘investigation’ would be supposed to uncover given that Madonna, in fact, said the following: “"Yes, I have thought an awful lot about blowing up the White House ... but I choose love,"

If you read the entire reports in government-controlled media like RIA Novosti or RT, you will find that the actual figures have not necessarily been distorted.  Why would they bother when most people are influenced by – and often do not read beyond – the headlines.  At 6 p.m. on Saturday, RT had the following headline: “Pink ’pussy hat’ march in Washington for women’s rights after Trump inauguration”.  The first paragraph stated that “Thousands of people - many wearing pink ’pussy hats’ - have turned out in support of women’s rights in Washington DC as part of a show of action on Donald Trump’s first day as US president.”  The second paragraph does mention reports suggesting that “as many as 500,000 people have turned up”, and then says that “According to Women’s March organizers, the event aims to protect human rights which have been “threatened” and “insulted” during the recent US presidential election.”

It would be easy to miss the protests altogether on Sputnik International, unlike the information about Melania Trump’s first tweet.

Those following the Russian media during the first months after Russia’s invasion of Crimea and military aggression in Donbas saw the same unanimity – occasionally also the same actors playing mutually contradictory roles and images from different conflicts in other parts of the world.  Later, a few journalists revealed details about the ‘information policy’ based on directions from the Kremlin.

US intelligence bodies have stated clearly that Russia used multiple methods of interfering in the US elections, with the interference clearly aimed at supporting Donald Trump.  Judging by the Russian media’s attempts to muffle or distort protests, the policy is ongoing.

Your article is factually incorrect. This was not a "human rights march" but an Anti-Trump march started by several groups. some funded by Soros and some by groups that are under watch by the federal government for violence and anti-government sentiment. CNN reported on the riots and it was even stated that around 400 people (now 217) were arrested during the riots for destruction of property and violence against police officers. Most of those arrested were part of Anti-Fa and other extremist groups that joined the riots. Madonna is currently being investigated for her statements at the protest. I live in the U. S.