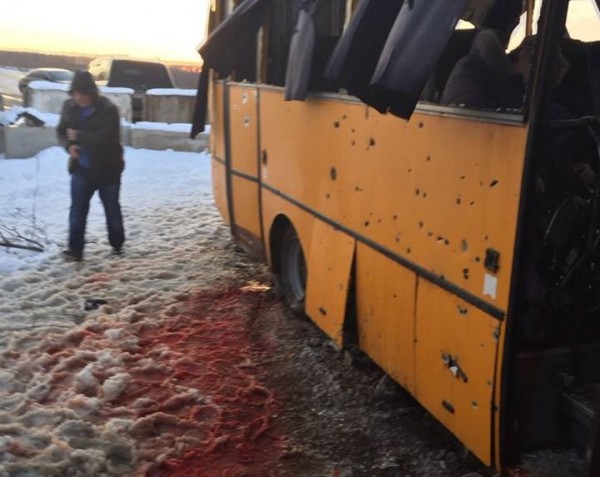 13 people died and many more were injured on Jan 13, 2015 when a Grad rocket from a direction under Kremlin-backed militant control hit a bus carrying civilians near a Ukrainian military checkpoint at Volnovakha [Donetsk oblast].  Two years later, relatives of the victims have filed an application against both Russia and Ukraine over the bombing and the failure by the Ukrainian authorities to carry out a proper investigation.

Andriy Krystenko from the law firm ILF explains that the claim against Russia is over its role in supporting terrorists on Ukrainian territory.  He believes that judgements in this case and others like it can help in future to hold Russia to answer for the military conflict and rights violations.

Krystenko asserts that Ukraine “could have tried to prevent the tragedy, minimize the consequences and, once it had happened, carry out an effective investigation”.  He explains only the last part, saying that the victims feel abandoned, with Ukrainian investigators and other officials not even trying to contact them.

The reason the Ukrainian authorities give for not carrying out an investigation is that the area from which the missile is believed to have been fired remains under militant control.

Kryvenko is unconvinced by this reason, although the lack of safe access is surely an obstacle.  It must be acknowledged, however, that there has been next to no movement in investigating crimes committed by Russian militant leader Igor Girkin and his men while they occupied Sloviansk, though the city is now under Ukrainian government control.

The other issue is, of course, compensation.  Kryvenko says that there have only been pitiful payments and these were not from the state, but from “MPs doing a whip-around”.

The application to the European Court of Human Rights is first and foremost an attempt to draw attention to the problem, and is one of many lodged against both Russia and Ukraine.   The Kharkiv Human Rights Group has lodged around 200 applications since the conflict began, lawyer Natalya Okhotnikova, explains, with these concerning torture, imprisonment in areas under militant control, destruction to property, bombing, including with the use of cluster bombs and mines.

The problem with any of these applications is that they can take years to be heard.

On 13 January 2015 militants from the so-called ‘Donetsk people’s republic’, based in Dokuchaevsk, were shelling the Ukrainian Army’s checkpoint near Volnovakha.  One of the Grad missile shells hit a passenger bus while the passengers were having papers checked.  The OSCE monitors are always very careful in their reporting, but this did confirm the direction from which the shell had been fired, with this making it extremely likely that militants were responsible.  Their findings corresponded to a surveillance camera video (mounted on the Donetsk – Mariupol road) which can be viewed here.

Immediately after the tragedy, the militants and pro-Kremlin media went into overdrive, trying to prove that the Ukrainian military were somehow to blame.  As with the downing by militants of the Malaysian Boeing MH17 on July 17, 2014, the facts were against them, and so the militants and Russian media sought chiefly to present numerous ‘versions’, often contradicting their own earlier reports.

The militants claimed, for example, that the checkpoint had been beyond the range of their artillery, although the previous day they had boasted of hitting that same checkpoint.  The Russian TASS press agency even reported that the shelling had taken place on territory under militant control which was demonstrably false.

In the version presented by Russia 24, the Ukrainian army was also to blame, but the claim this time was that the stationary bus had supposedly been turning, but hit a mine that the Ukrainian soldiers were supposed to have planted – near a Ukrainian military checkpoint.  The program spoke with an ‘expert’ who asserted that the damage “did not look like a Grad missile”.  The producers even came up with and described a sign reading “Careful, mines!”.

On Jan 18, thousands of Ukrainians gathered in Kyiv, Mariupol and in many other Ukrainian cities in memory of the victims of the bus shelling near Volnovakha.  They carried Ukrainian (and, in some areas, Crimean Tatar) flags, as well as placards reading “Je suis Volnovakha”, “We are Donbas” and others.