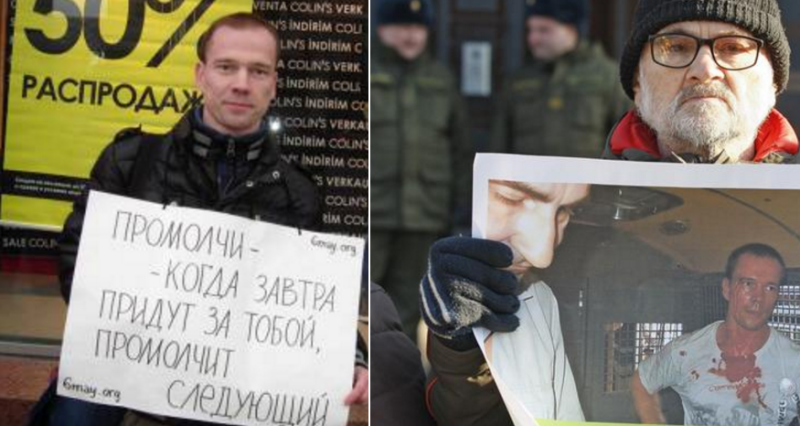 Dadin’s placard reads: Stay silent.  Tomorrow, when they come for you, the next person will say nothing

Russia’s Constitutional Court is due to give its judgement on a notorious article of the criminal code used to imprison civic activist Ildar Dadin for totally peaceful protest.  Courts in Russia at all levels almost invariably uphold politically-motivated rulings, and the Court will probably reject Dadin’s appeal, however there was one difference this time. The Russian Prosecutor General’s Office itself highlighted some of the gross irregularities of a legal norm which effectively criminalizes civic protest.

Dadin is the first Russian to have been imprisoned under the new Article 212.1 of the criminal code which was introduced in July 2014.  The article allows for criminal proceedings and a sentence of up to 5 years if a court has issued three rulings on administrative offences within 180 days.  It has become standard in Vladimir Putin’s Russia for the police to detain people at entirely peaceful protests, with administrative protocols then drawn up and processed by the courts with no questions asked.   It is also customary, and clearly happened in Dadin’s case, for the police to use provocateurs who walk up to a person holding a single-person picket and either cause trouble, or simply refuse to move away from the picketer until the police react.

The norm has been widely criticised as being in breach of Russia’s Constitution and legislation.  It imposes double punishment for the same actions, first via administrative legislation, then criminal. Most disturbingly, it effectively enables the criminalization of entirely peaceful protest.

Dadin was accused of taking part in protests on Aug 6, Aug 23, Sept 13 and Dec 5 2014.   There had been constant reference during the trial to his active support for Euromaidan and for Ukrainian political prisoners held in Russia, and it seems likely that this was one of the reasons why he was the first activist to be targeted.  He was sentenced on Dec 7, 2015 to 3 years’ imprisonment, with judge Natalya Borisova adding 1 year to the sentence demanded by the prosecution (it was later reduced by 6 months).

The hearing on Tuesday was over Dadin’s appeal to the Constitutional Court, whose President Valery Zorkin used the fact that the challenge was to the article itself, not its specific application in his case as an excuse for refusing to allow Dadin to be brought to the court.

Dadin insists that the norm creates grounds for the violation of a number of rights guaranteed by Russia’s Constitution, including the right to freedom of speech, freedom of peaceful assembly and the ban on trying a person twice for the same offence.

Dadin’s position is supported by all human rights organizations, both in Russia and abroad who have repeatedly called on Russia to abolish the norm.  Back in February 2015, the renowned Memorial Human Rights Centre stated that the new legislation destroys peaceful assembly in Russia.

The assessment from the Prosecutor General’s Office, together with experts from the Far-East University, reported by Kommersant acknowledged that the norm allows for “an arbitrary and unwarranted application of the law” and that the violation of the norm was hardly “of sufficient public danger to be considered a crime”.  The Prosecutor General’s Office therefore proposes that the legislation in this aspect be changed.

The criticism corresponds with that from all independent quarters, but was still startlingly truthful.  Perhaps too much so for the PGO representative Tatyana Vasilyeva who made a point of insisting that the norm as a whole was not at odds with legislation and that she did not view it as unconstitutional.  Representatives of the President, the government and the justice minister all repeated this position, claiming that the article was constitutional but that certain aspects need to be clarified.

Ivan Solovyov, representing Russia’s police major general human rights ombudsperson Tatyana Moskalkova, asserted that the “danger of the individual rises with each new infringement”.  He cited unnamed ‘experts’ in also claiming that the article complies with the Constitution.

Sergei Golubok, Dadin’s representative, called Solovyov’s words “a stab in the back for human rights”.   He noted that the former ombudsperson, Ella Pamfilova had concluded that Article 212.1 is unconstitutional.

As mentioned, it would be hard to find any human rights organization that does not agree with Dadin and with renowned lawyer Henry Reznik who called Dadin’s sentence “an affront to the law” and in clear breach of Russia’s Constitution which guarantees freedom of peaceful assembly.

Several peaceful protesters, gathering in support of Dadin and against 212.1 in both St Petersburg and Moscow were detained.  They appear to have been released after ‘prophylactic’ talks without administrative protocols being drawn up, presumably to avoid this being the detention that turned a peaceful protester into a ‘criminal’.