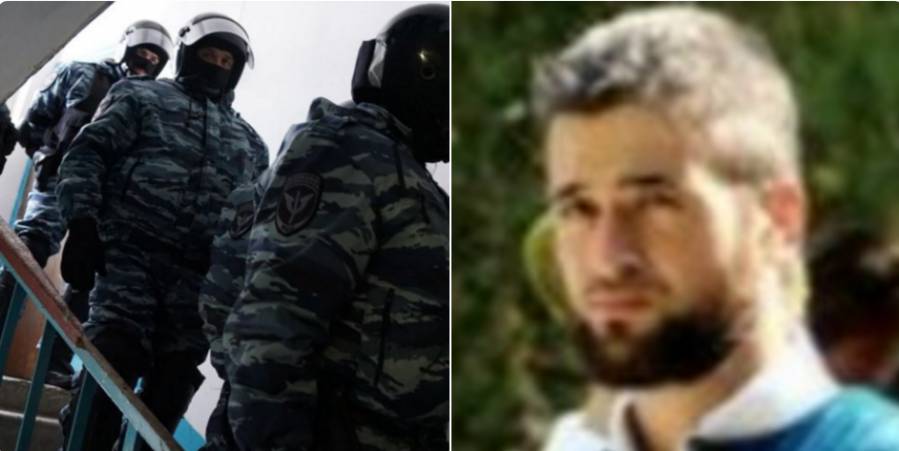 Although the two searches on Thursday were carried out with large numbers of armed and masked men, both men who were detained – human rights defender and lawyer Emil Kurbedinov and civic activist Seiran Saliyev – were charged only with administrative offences.

The detention of Emil Kurbedinov and the subsequent court hearing in which he was jailed for 10 days for a  totally innocuous video clip posted on the social network VKontakte a year before Russia’s annexation of Crimea are very clearly part of a concentrated offensive against Ukrainian and Russian lawyers defending victims of persecution (details here).

Kurbedinov was detained when he and fellow lawyer Edem Semedlyaev were on their way to the home of Seiran Saliyev where a search was underway.  Saliyev is one of 5 Crimean Tatars who have faced administrative fines on preposterous charges after they came out onto the street during the searches and arrests on May 12, 2016 of four Crimean Tatars on fabricated charges linked with an organization which is legal in Ukraine. Saliyev was convicted of ‘organizing an unauthorized mass protest’ for using the Mosque loudspeaker to inform people that the searches were being carried out.

This time, Saliyev was taken away by the FSB and brought before a Russian-controlled court on Thursday afternoon.  He was charged under two articles of the Code of Administrative Offences with ‘circulating extremist material’ (20.29) and public demonstration of symbols, etc. of an extremist organization (20.3).

He has been sentenced to 12 days’ administrative arrest.

The supposed ‘extremist’ material, like with Kurbedinov’s 4-year-old post on VKontakte, was presumably connected, though perhaps tenuously, with the pan-Islamist movement Hizb ut-Tahrir.  Russia declared it ‘terrorist’ in 2003 without providing any evidence to back this.  The organization is, as mentioned, legal in Ukraine and there is no evidence that it has committed acts of terrorism anywhere in the world.

Nonetheless, Russia constantly arrests men and sentences them to huge sentences or even life imprisonment for alleged involvement in the organization.  Kurbedinov is one of the lawyers who has actively publicized information about the flawed nature of the prosecutions in Crimea over supposed links with Hizb ut-Tahrir.

Kurbedinov and Saliyev were the only two men to face searches and dubious court rulings on Jan 26.  The Russian media, however, widely spread a report which claimed that a “special operation to eliminate a Hizb ut-Tahrir cell’ was underway in Bakhchysarai.  RIA Novosti cited Zaur Smirnov, one of the few Crimean Tatars who chose to collaborate with the occupation regime and now holds a post in the Russian-controlled Crimean government.

He claimed that a “systematic battle was being waged in Crimea against terrorist and extremist organizations” and deliberately misrepresented Hizb ut-Tahrir’s views to try to give them a ‘terrorist’ colouring.

It is likely that this disinformation offensive was launched because it is so very clear in Crimea that the Russian FSB are targeting human rights or civic activists, and other people with a strong civic position and pinning grotesque charges of, for example, seeking a violent overthrow of the Russian system.

RIA Novosti mentioned, and REN-TV even showed some kind of FSB video purporting to linked with the arrest of something referred to as a Hizb ut-Tahrir group in Tatarstan.  It is claimed that the group was planning terrorist acts.

There has never been anything to implicate Hizb ut-Tahrir members in terrorism and the renowned Memorial Human Rights Centre considers all those convicted only of membership of the organization to be political prisoners.  It has especially condemned the prosecutions in Crimea since Russia has no right to try people under Russian legislation on occupied territory over unproven involvement in an organization which is legal in Ukraine.

The FSB regularly accuses men they are holding incommunicado and without lawyers of ‘terrorist plans’.  The charges are almost invariably backed only by ‘confessions’ with no hard facts or proof, and scepticism with respect to the group in Kazan (Tatarstan) seems fully warranted.

Suspicion is also justified regarding the motives of the Russian media in so flagrantly lying about the illegal harassment and imprisonment of a human rights lawyer and civic activist in occupied Crimea.