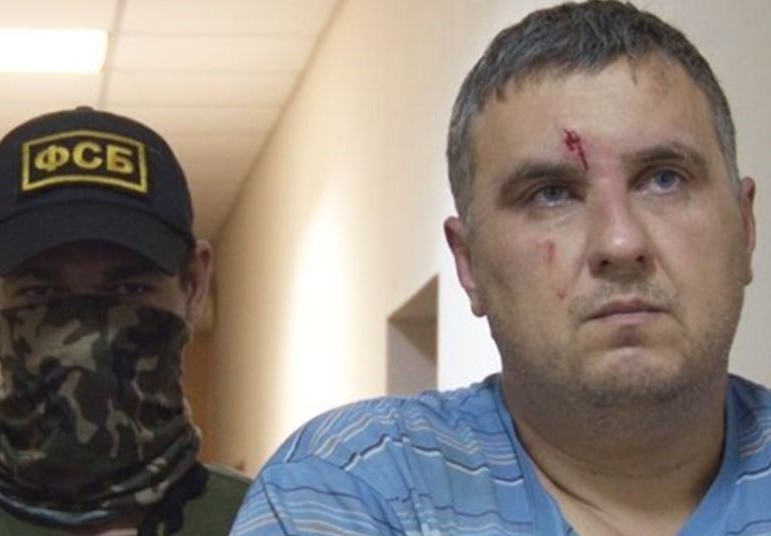 Russia’s FSB seem bent on preventing any contact with imprisoned Ukrainians Yevhen Panov and Andriy Zakhtei.  The two men were illegally taken to Moscow after the European Court of Human Rights forced the FSB to allow Panov’s lawyer to see him and Panov immediately retracted his ‘confession’, describing in detail the torture used to obtain it.  In Moscow they prevented Panov from seeing any member of his family, or even speaking with them by telephone.  They have clearly now understood that this is not enough secrecy and have moved the two men back to Crimea where even the Ukrainian consul will not be able to visit them.  It is increasingly evident that the FSB have a great deal to conceal, including indications that the victims of its ‘Crimean saboteur’ plot were selected in advance and enticed into a trap.

Yevhen Panov, a 39-year-old driver at the Zaporizhya Nuclear Power Plant in Energodar, was probably seized by Russia’s FSB on August 6, before what Russia has claimed was the first ‘attempted incursion’ by Ukrainian military saboteurs into Ukrainian Crimea during the early hours of Aug 7.  Panov’s arrest was announced four days later, on Aug 10, with the FSB asserting that he was part of a ‘Ukrainian saboteur’ group, planning serious acts of sabotage in Russian-occupied Crimea.  A video produced by the FSB was shown widely on state-controlled Russian media on which Panov is seen ‘confessing’ to working for Ukrainian military intelligence, without mentioning any of the other men who were later reported to have also been arrested.  Panov recited information about supposed plans to carry out acts of sabotage, with a ferry crossing, oil handling terminal, helicopter regiment and chemical factory named as targets.

Panov’s family initially assumed that he had been abducted from mainland Ukraine.  As a volunteer who, from the beginning of Russia’s undeclared war against Ukraine, had helped Ukrainian soldiers defending their country, Panov was under no illusions about the danger he could face in Crimea under Russian occupation.

Panov’s brother Ihor Kotelyanets has now learned via the lawyers that somebody phoned Panov on August 6 and asked him to take a Ukrainian family out of Crimea where they were supposedly being threatened.  Kotelyanets is convinced that, given the obvious risks, his brother must have known and trusted the person whom he assumes was part of the volunteer network.  Whether the person who made the call was aware that this was a trap is at present unclear.

Panov passed through the Ukrainian checkpoint, the buffer zone and reached the Russian checkpoint where he was told to get out of his car. He was hit with something very hard and lost consciousness, then taken to the North of Crimea where he was held in a basement and tortured until he gave the ‘confessions’ demanded.

Andriy Zakhtei, the other Ukrainian now held in Moscow in this supposed case, has told his lawyer a disturbingly similar story.  He is a taxi driver and received a call to come to a certain location. There he was confronted by FSB officers who seized him, took him with a bag over his head to a place where he was tortured for around 2 days, to extract a ‘confession’.

There have since been two more such ‘confessions’ shown on Russian television – from Ridvan Suleymanov and, finally, from a Kharkiv truck driver called Volodymyr Prysich  about whom nothing is known.

There is no evidence that the men knew each other, and Suleimanov had, in any case, been arrested three weeks before the allegedly planned attack on Simferopol airport.  He appears to be charged now with a false bomb alert supposedly costing a vast amount of money, although this is not what he confessed to.  Even a judge in occupied Crimea was so unconvinced that he refused to extend Suleimanov’s detention on Jan 25.  That, however, was swiftly rectified.  In the absence of Suleimanov’s lawyer Emil Kurbedinov who was himself arrested and jailed for 10 days on surreal charges, another ‘judge’ reversed the first judge’s ruling and Suleimanov remains in custody (details here).

A sabotage plot with serious flaws

The hysteria from Russian politicians and state-controlled media about a supposed Ukrainian Crimea sabotage plot was treated with immense scepticism outside Russia.  Although it was clear that something had occurred in the early morning of Aug 7, there were reports suggesting that this had in fact been a drunken brawl and shootout between Russian border guards and FSB, with one FSB officer killed.  There was no empirical evidence or witness testimony to substantiate the FSB claims about shooting from mainland Ukraine and another so-called ‘incursion’ the following night.  Credibility was not enhanced by the fact that the occupation authorities had blocked access to independent Internet sites reporting honestly about Crimea a few days before the alleged ‘attack’.

There is, in short, nothing to substantiate the FSB story except the testimony of the four men.  Panov was prevented from seeing a real lawyer for two months, until the European Court of Human Rights intervened, demanding information about how Panov had received the obvious injuries visible on the video and about access to his lawyer.

He was then allowed one brief meeting before being whisked off to Moscow, together with Zakhtei.  Both men have been placed under pressure to reject their independent lawyers, but have not done so and have, instead, lodged formal complaints with Russia’s Investigative Committee.  Both allege savage forms of torture applied by the FSB to extract ‘confessions’ and demand proper investigations (details here).

On Feb 10, Panov’s mother Vera Kotelyanets received the latest refusal by the Russian FSB (the letter is signed by K. Selivanov) to allow a visit to her son.  The letter acknowledges that according to Russia’s own law, relatives can have up to 2 visits per month, but states that “there are no grounds” for allowing an elderly woman to see her son, held illegally by the Russian FSB for well over 6 months.

The news that Panov and Zakhtei have again been moved has come as a new blow to the family.  Ihor Kotelyanets is gravely worried for his brother’s physical safety in Russian-occupied Crimea where the FSB have already demonstrated the methods they use to extract ’confessions’ to non-existent crimes.