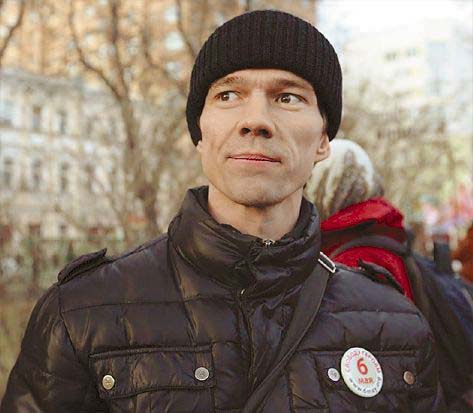 There have been mixed reactions to the judgement passed by Russia’s Constitutional Court on Feb 10 on the draconian anti-protest law used to imprison peaceful protester  Ildar Dadin.  While Amnesty International saw a “chink of hope” in the order for a new examination of Dadin’s case, the Memorial Human Rights Centre was considerably less upbeat about Dadin’s chances for an early release and strongly criticized the judgement.

Dadin is the first Russian to have been imprisoned under the new Article 212.1 of the criminal code which was introduced in July 2014.  The article allows for criminal proceedings and a sentence of up to 5 years if a court has issued three rulings on administrative offences within 180 days.  It is quite standard in today’s Russia for police to detain people at entirely peaceful protests, with administrative protocols for supposed ‘infringements of the rules on holding public gatherings’ then drawn up and processed by the courts with no questions asked.  The norm had been widely criticized as unconstitutional from the outset, and seen as part of the offensive against civil society.   Rights groups pointed out that 212.1 imposes double punishment for the same actions, first via administrative legislation, then criminal, and effectively enables the criminalization of entirely peaceful protest.

Dadin was sentenced to 3 years’ imprisonment, later reduced to 2.5, over 5 entirely peaceful protests or pickets.  He appealed to the Constitutional Court, challenging the law itself, rather than its application in his case.

The Court decided in a very long judgement that the article did not breach Russia’s Constitution, but it did recommend some amendments and that Dadin’s case be reviewed.

It also stipulated that the administrative penalties must have come into force before any proceedings were initiated under Article 212.1.

Amnesty International, which has declared Dadin a prisoner of conscience, was very positive about the judgement, with Denis Krivosheev calling it “a chink of light in an otherwise bleak outlook for the right to peaceful assembly in Russia”.  He believes it sends “a strong message to the authorities who have used this draconian legislation to persecute peaceful protesters like Ildar Dadin”.

“To explain the unconstitutionality of 212.1, 3-5 pages would have been sufficient, yet the judges wrote 43. They wrote a whole pile of exceptions to the article which are, in fact, complicated and based on value judgements. The CC judgement has made further application of 212.1 more difficult, but has not prevented it”.

He believes it quite likely that a new trial in Dadin’s case will still end in conviction.  They will find some way of skirting around the fact that the proceedings were initiated before all administrative penalties had taken effect, and will just question the police officers more to try to present the activities as ‘dangerous’.

It is, unfortunately, very easy to imagine how that will be done.  If, up till now, any old ‘infringement of the rules on holding a public event’ would do, this may now change.  ‘Disobeying a police officer’ may be preferred since that could surely be presented as ‘harmful’ and demonstrating intent.  There could also be more use of provocateurs against solitary picketers.  The police can always choose to view the peaceful picketer and provocateur as mutually responsible for a supposed breach of the rules, with the conflict also being viewed as publicly dangerous.

Dadin’s lawyer Ksenya Kostromina has already applied to the Supreme Court for a review of her client’s case.

Hopefully Koroteev is overly pessimistic about the chances for Dadin’s release, however his frustration with the Court’s refusal to recognize the overt unconstitutionality of 212.1 will be widely shared.