Tortured & Almost Certainly Innocent Ukrainian Life Prisoner Dies Without JusticeForced to hunger strike in search of justice for their sonsUkraine’s MPs block last chance of justice for tortured Ukrainian prisonersJudicial Review demanded for Life Prisoners Tortured into ‘Confessing’ to AnythingSupreme Court Candidate Exposed for Sentencing Innocent Man to Life ImprisonmentUkraine found in bulk violation of the prohibition of torture over denial of justice to life prisonersViktor Lozinsky, the ex-MP convicted of murder, wins in local elections in UkraineUkrainian life sentence – because they needed to arrest somebodyInvestigator involved in Ukraine’s most notorious miscarriage of justice appointed to top prosecutor postWhat judicial reform when it’s not Russia, but Ukraine that refuses to release an innocent life prisoner?Judicial reform dilemma for Zelensky“Exceptional lawlessness requires extraordinary methods”. Ukraine’s leaders urged to free Volodymyr PanasenkoLife sentence for a crime somebody else admitted toLife prisoners freed in court in important first for UkraineUkraine found in violation of the prohibition of torture over treatment of life prisoners10 Ukrainians imprisoned for murders committed by serial killerWhy are Ukrainian legislators willing to see innocent men serve life sentences?In Ukraine a life sentence is for life even when you’re innocentLutsenko is helping block justice for innocent life prisonersUkraine ordered to pay massive damages over police killing and cover up
• Topics / Against torture and ill-treatment
• Topics / The right to a fair trial 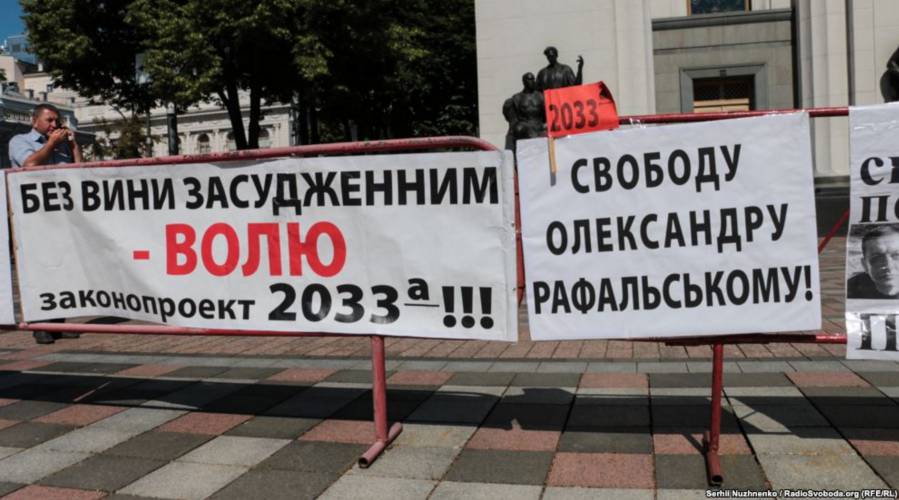 The call to free Oleksandr Rafalsky was never heeded, and it is now, sadly, too late.  MPs still have the chance - and the responsibility - to help others find justice in time

Ukraine’s parliament is blocking a bill which could bring justice to Ukrainians tortured into confessing to crimes they never committed and now serving huge sentences. The same MPs who rightly call for sanctions against those police, prosecutors and judges in Russia implicated in the torture and fabricated prosecutions of Ukrainian filmmaker Oleg Sentsov and many other Ukrainians are silent about the injustice against other Ukrainians closer to home.

Draft law No. 2033a was tabled back in 2015, and even passed through a first reading in November that year.  Over 13 months later, at least one of the obvious victims of a grave miscarriage of justice – Oleksandr Rafalsky - has died in prison and the bill is no closer to being passed.

These include Volodymyr Panasenko who was sentenced to life imprisonment on the basis solely of a person undergoing treatment for alcoholism in a psychiatric hospital.  The person retracted his testimony in court, saying that it had been given under duress.  Panasenko was convicted nonetheless.  Somebody needed to be found guilty after all.  Maxim Orlov was just 21 in 2012 when and 14-year-old Oleksandr Kozlov were convicted of double murder.  The conviction was based solely on Kozlov’s testimony obtained without a lawyer present and through torture.  Orlov is serving a life sentence, Kozlov – 14 years.

There are undoubtedly individuals who have no interest in justice being reinstated. Like with political prisoners in Russia, there have been investigators, prosecutors and judges who either deliberately faked evidence or ignored clear signs that a person was innocent.   Any review will bring this to light.  Since some of the individuals involved now hold better posts in, for example, the Prosecutor General’s Office, they might well want to block any possible review.

Back in June 2016, one of the authors of the bill Viktor Chumak accused the two main factions in the Verkhovna Rada – the Bloc of Petro Poroshenko [BPP] and the People’s Front – of blocking the bill.  He suggested then that this was because of pressure from the Prosecutor General’s Office.  There have since been indications that the People’s Front will not support the bill in a vote.

None of this is official.  It would be hard to find good reasons for rejecting a bill that has maximum safeguards against abuse and seeks only justice for those whose guilt was never proven.  Much more convenient to simply stymie the bill and prevent it being voted on at any time when most MPs are present and accountable for their votes.

It’s called betrayal, and closely akin to that of the ‘investigators’ and prosecutors who have used torture and threats against Ukrainian political prisoners in Russia and the judges who obediently passed the sentences demanded of them.   Ukraine is currently drawing up a list of such individuals in Russia and Russian-occupied Crimea who should be subject to Ukrainian and international sanctions.  It is galling that some Ukrainian officials have behaved no better over the years, but seriously disturbing that some Ukrainian parliamentarians appear to be giving them protection.