Warning: A trip to Russian-occupied Crimea could get you jailed for 11 yearsAbduction, mock executions & torture in Russia’s ’trial’ of Ukrainian aviation fanaticFrom Maidan to Torture & Solitary Confinement in RussiaKyiv demands return of Ukrainian abducted & jailed in Russia for ‘spying’ on the InternetTorture most classified: How Russia jails another abducted Ukrainian for ‘spying’Ukrainian abducted to Russia sentenced to 11 years for mystery ‘spying’Russia is killing 73-year-old Ukrainian hostage Yury SoloshenkoRussia sentences 73-year-old Ukrainian pensioner to 6 years for ‘spying’Mystery ’Trial’ begins of Russia’s Elderly Ukrainian HostageWorse than the Cold War: Russia’s FSB torments elderly Ukrainian hostageMoscow’s Kafkaesque ’Ukrainian Spy’ CasesMoscow shouts ‘abduction’ yet holds Ukrainian hostages incommunicadoRussia holds 72-year-old Ukrainian hostage on absurd spying chargesRussian mother of 7 stands by her warning about Russian soldiers in UkraineRussian Mother of 7 accused of ‘treason’ released from custodyRussians call to release mother of 7 accused of revealing ’state secrets’Russian woman charged with ‘treason’ for reporting soldiers sent to UkraineRussian Newspeak: “Killed at exercises on the border with Ukraine”Russian soldiers’ deaths in Ukraine: A web of lies and fake social network pagesMore Russians aware that their sons are being sent to fight and die in Ukraine
• Topics / News from the CIS countries 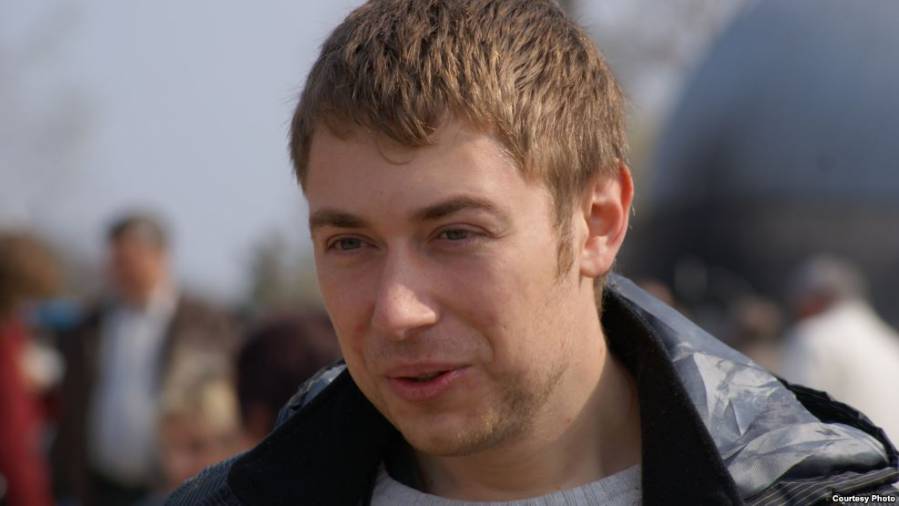 Ukraine has initiated the extradition proceedings which could get Valentin Vyhivsky returned to Ukraine well over two years after he was seized by armed paramilitaries in Russian-occupied Crimea in September 2014.  He was then held in Russia incommunicado for 8 months, and later sentenced in a closed Russian court to 11 years’ imprisonment for alleged spying.

The secrecy behind this case has meant that, unlike other Ukrainians abducted or taken prisoner in Russia, Vyhivsky has not been formally recognized by the Memorial Human Rights Centre as a political prisoner.  Petro Vyhivsky to this day has yet to see any official documents explaining what his son was charged with.

For now, therefore, the priority is to get him returned to Ukraine and the Justice Ministry has obtained a court ruling from the Kyiv Darnytsky Court formally recognizing the Russian sentence for spying and allowing Vyhivsky to serve the sentence in Ukraine.

The application will now be sent to the Russian Justice Ministry which will have a month to answer.   Optimism is limited, since Russia has refused to extradite Ukrainian political prisoners Oleg Sentsov and Oleksandr Kolchenko, claiming quite incredibly that the two Ukrainians from Crimea had ‘automatically’ become Russian citizens.  Both men were, however, imprisoned and convicted after “an absolutely Stalinist trial” as Ukrainians.  Russia also refused to extradite Khaiser Dzhemiliev, whom it was illegally holding hostage to put pressure on his father, veteran Crimean Tatar leader Mustafa Dzhemiliev.

33-year-old Vyhivsky has a small son who has not seen his father now for nearly two and a half years.  Vyhivsky was seized at Simferopol railway station on 17 September 2014.  During the many months that he was held in Russia without any contact with his family, access to the consul and a proper lawyer, he was beaten and tortured, and twice subjected to mock executions.  He provided the ‘confessions’ demanded of him, and was, in October 2015 sentenced to 11 years’ maximum security prison.

At the beginning Vyhivsky was charged under Article 183 of the criminal code, with illegally receiving and divulging commercial, tax or banking secrets.  This was then changed to the much more serious charge of trying to gather Russian state secrets to pass on to the Ukrainian Security Service.

Vyhivsky has been fascinated in aviation since childhood, and spent a lot of time on the Internet chatting with other enthusiasts.  It is possible that this is what drew the attention of the Russian FSB to him.  He was one of many Ukrainians either forcibly taken to Russia or seized while visiting that country during the months after Russia’s invasion of Crimea and military aggression in Donbas.

The fact that even Vyhivsky’s whereabouts were concealed for so many months makes it extremely difficult to take any charges of state espionage seriously.  If the FSB really had grounds for such suspicions, they would have presented them immediately, not held a man totally incommunicado for 8 months.

The Ukrainian consul was only allowed to see him after 8 months, and then in the company of two guards who immediately stopped them if they tried to talk about anything but ‘neutral subjects’.  The same thing happened when his mother visited him in Moscow.  He managed to tell her only that “they know how to persuade you”.  His mother and wife visited him only one more time and for no more than an hour while he was still held in Moscow.  Again, they were separated by glass and a guard stood next to Vyhivsky, controlling what he said.

Halyna Vyhivska has since been allowed one proper visit with her son, and has both seen the scars of some of the methods of ‘persuasion’ applied and learned details about the two mock executions and other torture he was subjected to.

Even the appeal hearing at which Russia’s Supreme Court upheld the conviction on March 31, 2016 was still top secret.  By then Vyhivsky had a proper lawyer, however the latter (Ilya Novikov) had to sign an undertaking not to divulge any information.  It is likely that the information presented to the court included details about the torture used to ‘persuade’ Vyhivsky to confess.

Vyhivsky has been held in solitary confinement and in an effective information vacuum without access to radio, TV or newspapers.

Please write to Valentin – show him – and the Kremlin – that he is not forgotten.