Jailed for proving that Crimea did not ask for annexation 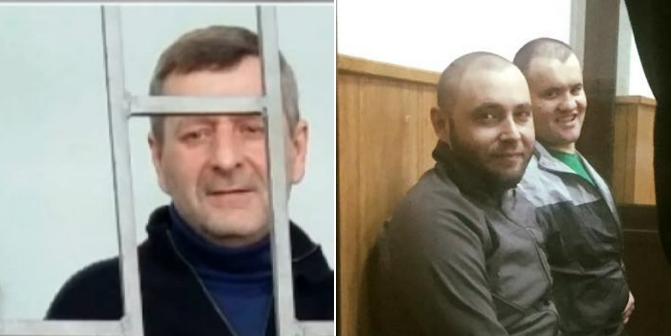 A massive demonstration, organized by the Crimean Tatar Mejlis, outside Crimea’s parliament on February 26, 2014 prevented Russia from claiming Crimea had voluntarily chosen to be annexed. This is not just information for historians since the demonstration has been used as pretext for one of the most lawless of Russia’s trials in occupied Crimea – and for revenge against Crimean Tatars

The trials underway of Crimean Tatar Mejlis leader Akhtem Chiygoz, Ali Asanov and Mustafa Degermendzhy began as legal nonsense and have since plummeted further and further into farce. Despite the trials on charges over a pre-annexation demonstration being in breach of Russia’s own legislation, there have already been 83 court hearings in that of Akhtem Chiygoz, with no end in sight.  The huge number of hearings has nothing to do with the amount of evidence. Quite the contrary since the prosecution witnesses have either given irrelevant testimony or testified in Chiygoz’ favour.  Even Russia’s ace card of ‘secret witnesses’ has proven a dud.  Under questioning, their testimony falls apart and the video footage, as stated from the outset, confirms the defence’s rejection of all the charges.

Three men – Chiygoz, Ali Asanov and Mustafa Degermendzhy – have been in detention now for around 2 years.  Chiygoz is charged with organizing ‘a mass riot’, Asanov, Degermendzhy and 3 other Crimean Tatars with taking part in it.  The charges pertain to a pre-annexation demonstration, on Feb 26, 2014, where pro-Ukrainian demonstrators, mainly Crimean Tatar, gathered to prevent an attempt to force through an illegal change in Crimea’s status.  There were around 10 thousand from the pro-Ukrainian side, and several thousand pro-Russian demonstrators.

The charges are surreal, since even had this been a mass riot, it happened on Ukrainian territory under Ukrainian law.  Russia’s own criminal code acknowledges that it has no jurisdiction over such events.

Only Crimean Tatars are targeted, although pro-Russian demonstrators were present, and the two deaths that day were in fact on their side of the demonstration.

At the 80th hearing, important video footage was examined.  Chiygoz is seen, together with the Mufti and some other Mejlis figures, behind the Head of the Crimean Tatar Mejlis Refat Chubarov.   On the video footage here https://youtube.com/watch?v=HdVKJjYsY8o&feature=youtu.be,  Chubarov can be seen trying to speak and realizing he can’t compete with the noise of the crowd.   Chiygoz and the other men began making gestures which seem clearly aimed at asking the crowd to be quiet.

The prosecution has claimed, however, that Chiygoz, “aware that his instructions would be carried out by voice and gestures understood among supporters of the Mejlis, demanded in Russian and Crimean Tatar that the supporters use force against the demonstrating citizens, members and supporters of the Russian Unity party”.

If they genuinely thought this, Polozov rightly notes, they should have brought similar charges against, for example, the Mufti.  He, however, has since chosen to collaborate with the occupying regime, unlike the Mejlis.

While the video footage shown at the 80 and 81st hearings show nothing to back the prosecution’s claim of calls to violence from Chiygoz, they do demonstrate where the attempts to cause trouble were coming from.

You can clearly see, for example, pro-Russian paramilitaries, Cossacks and members of the Russian Unity party gathered in the inner courtyard.  Polozov notes that on some of the video footage members of the pro-Russian contingent can be seen actively trying to provoke trouble or deliberately cause crushes.  Here, for example, https://youtu.be/YOth05NskSo  a pro-Ukrainian demonstrator has become unwell as a result of such crushing.  Typically, the occupation authorities have made no effort to identify this person.

The video footage in the case of all the men accused incriminates only the prosecution since there are no grounds for either calling the event a ‘mass riot’ or for any specific charges.  There is no footage to show Chiygoz doing anything but trying to calm tempers.

In Asanov’s case there is supposedly a ‘victim’.  The video footage shows this pro-Russian ‘victim’ throwing a bottle with water which hit Asanov on the head.  Asanov was too far away to hit him back, yet the bottle-thrower is treated as the aggrieved party, and a young father of four has spent almost 2 years in detention, charging with “causing him pain”.  There is nothing to confirm that the blow even happened since the individual (identified only as Ivkin) did not report it or seek medical assistance.

There are strong grounds for believing that both Asanov and Degermendzhy are imprisoned for refusing to give false testimony against Chiygoz.

The situation with secret ‘witnesses’ is no better. Polozov reported after the 79th hearing that he had serious doubts as to whether the last such individual understands what he’s saying.  At one hearing. he claimed that he had arrived by car which he left at the railway station, heading to the demonstration by foot, and then the next day refused to answer the same question.  Other claims as to what he allegedly witnessed are physically impossible.  He asserted, for example, that he understood that people had burst into the Crimean parliament buildings since the number outside got smaller. There were thousands of people outside the building and there is no way he could have observed a reduction in numbers.

Polozov says that the witness gets muddled, seems to have no sense of timing and cannot, in fact, confirm or say anything sensible about Chiygoz’s actions either on the eve of or during the demonstration.

The witness asserts that he saw several demonstrators from the pro-Ukrainian side with hidden spade sticks, yet cannot say that he saw any being used.

Chiygoz is prevented from even being present at his own trial, and the sound quality is so bad, that he often cannot hear what is happening.

There are compelling grounds for suspecting that Chiygoz, Asanov, Degermendzhy and the Mejlis itself are facing reprisals because the demonstration that day prevented Moscow from achieving the planned seizure of control without Russian troops and the sanctions and international condemnation that they have brought.  See: