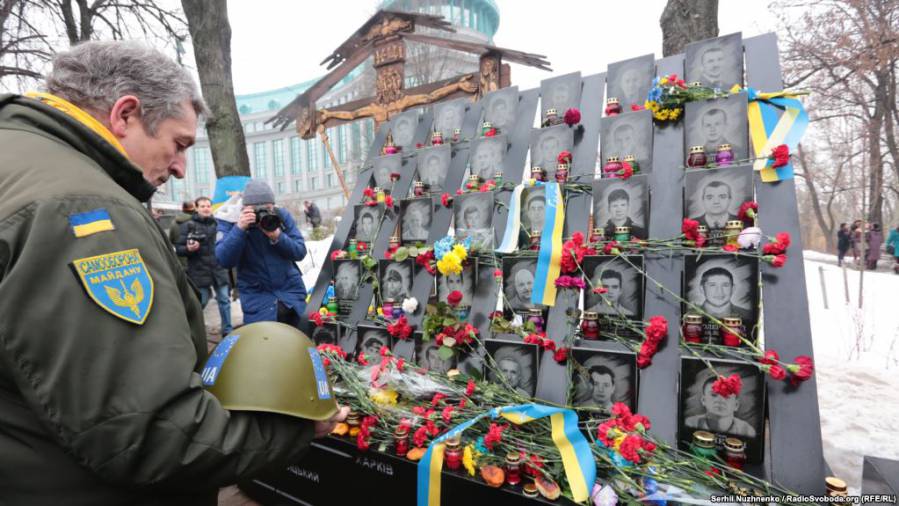 On the third anniversary of the bloodiest days of Euromaidan, lawyers have warned that laws passed since Maidan are actively blocking the chances of holding those guilty of crimes against Maidan activists to answer.  Most worryingly, the law on trial in absentia, essentially tailored around former President Viktor Yanukovych could result in European Court of Human Rights judgements against Ukraine.

It is vital that those guilty of crimes are prosecuted.  This is about justice, Euromaidan SOS activist Oleksandra Matviychuk stresses, not revenge.   “So that in future no other regime, no political forces, regardless of colour or shade, thinks to shoot peaceful protesters.”

At a press conference on the eve of the anniversary, lawyers representing the families of those killed on Maidan did have positive developments to report, including with regard to the general classification of the crimes. The gunning down of activists on February 20, 2014 is now recognized as “the carrying out of a terrorist act in order to intimidate people into ending their protests”.

Although three years have passed, it was only with the formation of the Special Investigations Department, headed by Sergiy Horbatyuk, at the end of 2014, that any real progress was made.  One of the lawyers,  Pavlo Dykan, believes that evidence is still emerging, in part because the efforts of the investigators inspire confidence.

That Department is, however, constantly facing obstruction from within the Prosecutor General’s Office.  As reported, in October 2016, the Prosecutor General Yury Lutsenko suddenly announced the reorganization of the Department, with Horbatyuk losing a considerable part of his responsibilities and staff.   All the crimes believed to have been committed by  former President Viktor Yanukovych and his associates were separated out and placed under another department.

The lawyers are unimpressed by Lutsenko’s restructuring.  The Special Investigations  Department has been deprived of staff and other vital back-up, while there is no information about what is happening in the Yanukovych case.

The major part of the law enforcement system is, Dykan says, either directly or covertly resisting the Maidan investigation. Dmytro Sadovnik, the Berkut commander who should be on trial now over killings on Maidan, was released from custody and promptly helped to flee to Russia by ex-Berkut officials, still working in the police force, he asserts.  There he swiftly received Russian citizenship, as have a large number of Berkut officials on the wanted list over Maidan.  Horbatyuk has noted that at least half the Berkut officers deployed against Maidan activists are still working in the police force.

One of the most disturbing reasons for the lack of prosecutions comes in laws passed since the Revolution of Dignity.  One such law, passed on February 21, 2014, prevents prosecution of “participants in the protests”.  According to lawyer Viktoria Deineka, the law effectively makes it impossible to prosecute police officers.  They simply apply to the courts for the proceedings against them to be terminated, citing that law.  Deineka believes that the law was passed specially to prevent proper investigation and subsequent investigations.

Equally dubious are amendments to Articles 364 and 365 of Ukraine’s Criminal Code, on exceeding official duties.  According to the new version, actions only fall under these articles if there has been material damage.  Fine if you have proof of embezzlement, but what if you’re dealing with Berkut officers who beat up peaceful protesters?  A lot of criminal investigations under those articles are now being terminated, the lawyers say.  The difficulty of producing ‘material evidence’ is one reason, together with the fact that a lot of the evidence has been lost by now, and key figures are in hiding.

Lutsenko had promised that a so-called ‘big Yanukovych case’ would be passed to the court by the end of 2016.  There is no sign of this, nor is there any likelihood of it.  Deineka warns that there cannot be one such case since there are a number of separate criminal proceedings which are at different stages.  If they are merged into one, specific timeframes for investigating the individual cases will be lost, and charges that have not been fully investigated could end up before the courts too early.  All of this could elicit accusations against Ukraine of selective justice.  Each case needs to be passed to the court when it is ready.

Law on Trial in Absentia

The Maidan lawyers are not alone in warning about the dangers of this law.  They believe that it was adopted purely to try Yanukovych, and that this could end up working against Ukraine, since the very law will be viewed as selective justice.  Sentences could end up successfully appealed at the European Court of Human Rights.

All Ukraine’s Prosecutor Generals since Maidan have promised swift prosecutions, trials and that the culprits would answer.  Both Viktor Shokin and, now, Yury Lutsenko have been accused of obstructing the Department which really is investigating Maidan crimes. Horbatyuk has consistently warned against fixation on prosecuting Yanukovych at the expense of attainable and important prosecutions of those who carried out the crimes.  The cases the prosecutors from the department bring to the court have every chance, if not sabotaged, of resulting in prosecutions.

There is considerably less confidence about the big Yanukovych case, uniting multiple episodes ever reaching the court, but that is only the first problem. It would be a terrible betrayal to all those killed, injured or persecuted during Maidan if publicity-seeking trials were to result in cases collapsing or, worse, being condemned by the European Court of Human Rights.