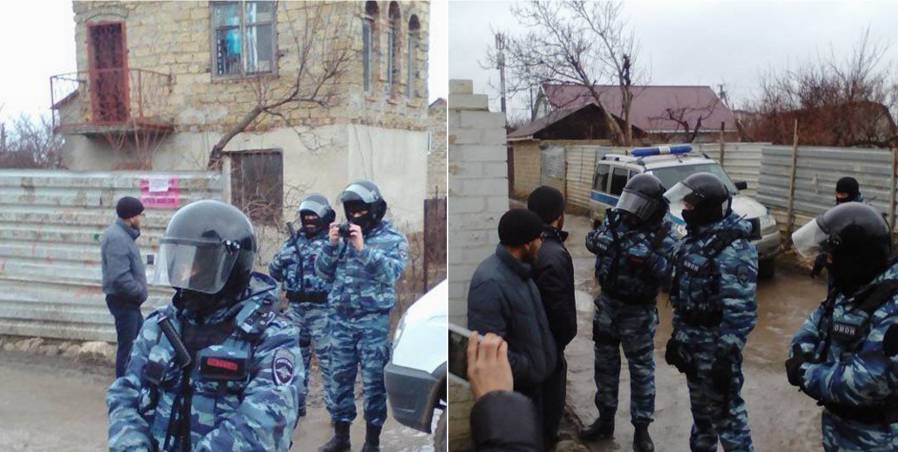 Another Crimean Tatar has been charged in Russian-occupied Crimea over an innocuous social network post from 2014, with 10 other Crimean Tatars who arrived outside his home to show moral support and report what has happening also taken away.  Lawyer Emil Kurbedinov notes that fears of a further escalation in repressive measures against civic activists are proving well-founded.

Marlen Mustafaev was detained in the early morning of Feb 21 on his way to work.  It was while a search was being carried out of the home he shares with his wife Elnara and their 4-month-old daughter that other Crimean Tatars gathered outside videoing the proceedings and the armed and masked OMON riot officers, one of whom began openly photographing them.  10 men, including many who actively report on the armed searches and arrests were taken away in a police van.  One of the activists detained was Osman Arifmemetov who can be heard on the video here simply asking the men why they are obstructing his path and pointing out his constitutional rights.  Another was Remzi Bekirov, who equally peacefully took the photo above.

Mustafaev was subsequently taken to the so-called Centre for Countering Extremism and has been charged under Article 20.3 § 1 of the Code of Administrative Offences [CAO] for a social network post in July 2014 on VKontakte which showed a symbol from the organization Hizb ut-Tahrir.  This pan-Islamist organization is legal in Ukraine and most countries, but Russia’s Supreme Court declared it ‘terrorist’ in 2003.  No sensible reason was provided and the decision was concealed until it was too late for the organization or human rights organizations to challenge it.  It is now regularly used to imprison Muslims in Russia and is increasingly being used particularly illegally in occupied Crimea.  The 19 men so far in indefinite detention in Crimea and facing monstrously long sentences include a prominent human rights activist Emir-Usein Kuku and other people who have taken a strong civic stand.

Russia has also begun persecuting people who come out to peacefully demonstrate their support for victims of repression and to report the arrests. Crimean Tatar leader Ilmi Umerov, who is himself facing criminal charges for saying that Russia must leave Crimea, writes that the aim of the detentions on Tuesday, as on earlier occasions, is “to keep everybody in a state of numb fear.”  This is an ongoing campaign of total intimidation.  “Continuing to live in occupied Crimea, we must be even more united… If you find out that somebody is facing a search, court hearing, detention or anything like that – come and support them…  The non-violent struggle of the Crimean Tatar people for their rights is continuing in the new reality, under conditions of occupation and total lawlessness”.

Kurbedinov reported that the police were holding the detained Crimean Tatars and quite illegally photographing them, and trying to get their fingerprints.  All appear to have been charged under Article 20.2 of the COA with supposed ‘infringement of the established rules for organizing or holding a gathering, protest, etc.”.

Kurbedinov, who was himself recently arrested and imprisoned for 10 days on surreal charges linked to a pre-annexation post on social networks is representing Mustafaev, with his colleage Edem Semedlyaev representing the 10 men who came to show support.

Marlen Mustafaev has been jailed for 11 days, the men who came out to support him* to 5 days.  Typically, Russian television has tried to present the above events as some kind of ’special operation’ against Hizb ut-Tahrir.

*  The men jailed for 5 days for moral support