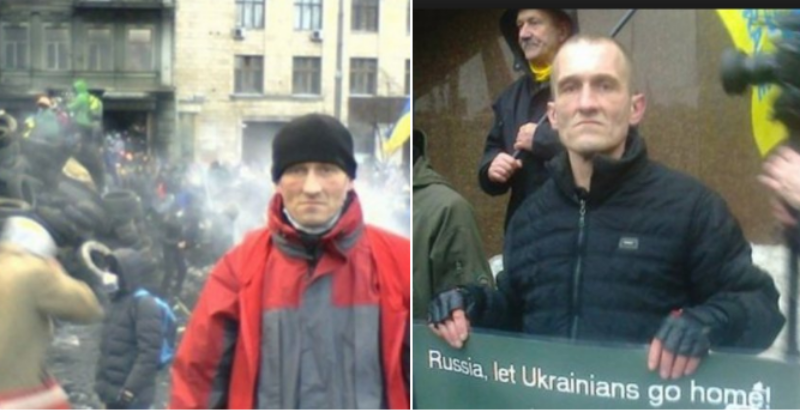 Sergei Anisiforov’s battle for asylum in Ukraine has ended in victory three years after he was injured on Maidan and even honoured for his part in Ukraine’s Revolution of Dignity.   In a hearing on February 22, the Odesa District Court of Appeal addressed blistering criticism at the Odesa branch of Ukraine’s Migration Service and gave it until the end of March to provide Anisiforov with refugee status.

The criticism was assuredly warranted.  Ukraine’s Migration Service has remained effectively untouched by reform since Euromaidan, as its treatment of Anisiforov has demonstrated.  The appeal which has now been rejected once and for all marks the end of a baffling series of challenges from the Odesa migration service to court rulings in the 45-year-old Russian’s favour.

Sergei Anisiforov took part in Euromaidan from soon after it began.  He had been living in Odesa and set off for Kyiv in outrage at the violent dispersal of students on Nov 30, 2013.  He stayed, as part of the Odesa UDAR Party tent group.  He was injured in January 2014, and was later honoured by the Ukrainian Orthodox Church under the Kyiv Patriarchate for his commitment and his love of Ukraine.

He has since lived in Odesa, where he is a member of the Maidan self-defence group.  In an earlier interview, he spoke of the self-defence activists as fighting manifestations of separatism and attempts by pro-Russian activists to repeat the Kremlin-funded and manned Donbas military conflict in Odesa.  He would have joined one of the Ukrainian volunteer battalions in Donbas, but for a serious back injury.  He has openly opposed Russia’s annexation of Crimea from the beginning.

It defies belief that in light of the above anybody could suggest that Anisiforov should be forced to return to Russia, yet that is precisely what the migration service has done, doggedly, for the last 2 years.

Although born in Soviet Ukraine, Anisiforov has Russian citizenship.  He was abandoned by his parents as a baby and grew up in a children’s home.  Like many other young people from such homes, he later ended up in trouble with the law and served time in prison.

Unlike others, however, he got a very specific break and was noticed by the producers of a crime serial which was being filmed in St. Petersburg.  From 2008 he became a well-known actor in such serials, sometimes playing a criminal, other times a law enforcement officer.

From 2011 and the last real wave of protests in Russia over Vladimir Putin’s plan to stand for a third term as President, Anisiforov became more aware of what was wrong in Russia and even took part in protests himself.  He moved to Odesa for personal reasons, a month before the beginning of Euromaidan.

The reasons were quite extraordinary.  The migration officials refused to accept that he was in danger in Russia, essentially claiming that Russia was a democratic country, and that there were no grounds for expecting that he could face danger.

In August 2015, for example, a migration official claimed that the case of Crimean filmmaker Oleg Sentsov and Oleksandr Kolchenko was not relevant since they were members of Right Sector, a Ukrainian nationalist organization banned in Russia, while Anisiforov did not belong to any such group.

Neither did Sentsov and Kolchenko, yet that did not stop a Russian court from sentencing them to 20- and 10-year sentences which have been internationally condemned as politically-motivated reprisal for their opposition to Russia’s annexation of Crimea.

Two Ukrainians - Oleksandr Kostenko and Andriy Kolomiyets - are currently imprisoned illegally in Russia, serving long sentences on fundamentally lawless charges linked with totally unprovable and implausible actions they are alleged to have committed in Kyiv during Euromaidan.  It is absurd to claim that Anisiforov, who is known to have been on Maidan from December 2013, would not be in danger of at least such a concocted trial.

He would likely also face physical danger.  His relative fame has made his support for Maidan and condemnation of Russia’s Crimea land-grab particularly galling to many Russians, and he has repeatedly faced open threats.  He has also been placed on what is effectively a hit list posted on a Kremlin-backed militant website with the ominous title: Tribunal: Retribution is coming.

All of this was recognized by Ukraine’s courts, which repeatedly rejected the Migration Service appeals and ordered it to reconsider Anisiforov’s application.

The ruling on Feb 22 is, thankfully, not subject to appeal, and Sergei’s battle is won.  He is the second Russian living in Odesa to have had to fight the Migration Service in this way.  Pyotr Lyubchenkov went through much the same difficulties before finally receiving refugee status a few months ago.  Other Russian asylum-seekers are still going through appeals based on baffling refusals.

The Migration Service must provide all documents to Ukraine’s Security Service [SBU], which has also demonstrated extraordinary willingness to collaborate with Russia’s FSB.

Both bodies would be well-advised to think hard about the questions Judge Yury Hradovsky had to the migration official at the court hearing on Wednesday.  Questions, and biting criticism.  He demanded to know on what grounds they kept issuing their incomprehensible refusals to grant asylum.  What gave them the right to claim that Russia was a law-based society and Anisiforov had nothing to fear returning?  Which country did they think they were in, he asked, Russia or Ukraine?