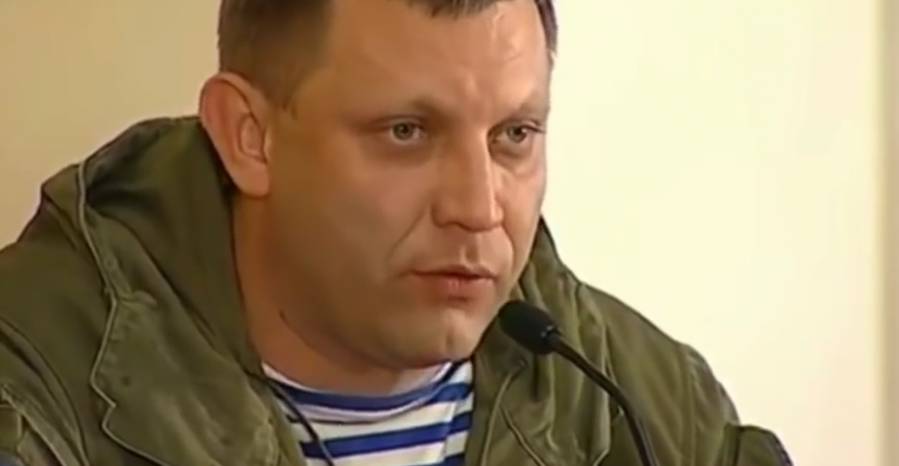 Alexander Zakharchenko, head of the so-called ‘Donetsk people’s republic’ [DNR], recently claimed during an OSCE press conference that he is fully entitled to shell Krasny Liman or Artemovsk, as these are “his land”.  This was not the first time that militants have claimed such a ‘right’, both verbally and through their actions, but the statement certainly adds to the multiple reasons why Ukrainians want to see Zakharchenko before the International Criminal Court.

Zakharchenko asserted that “when I shoot at my own home in Krasny Liman or Artemovsk (my parents’ home), I am shooting at my own home, whereas for those who come from Dnipropetrovsk, from Lviv or Kyiv, it’s immaterial whether they’re shooting at my home in Artemovsk, or in Donetsk.  I live on my land, just like the over 2 million population.  And unlike all the others, I have a moral right to defend my family, my children, my wife, my neighbours.  Not one mortar from Donetsk has fallen on Kyiv, Kharkiv, Lviv, Uzzhorod or all the others”.

Zakharchenko often speaks on Russian television, and there his words are invariably accepted at face value.  Such pathos-filled words are likely to be embellished by news reports which only mention shelling by the Ukrainian army.  In fact, Zakharchenko’s words cannot withstand the slightest scrutiny.  He was installed as DNR leader after the Russians who had been in control from the beginning of the fighting in Donbas – Igor Girkin [Strelkov], Alexander Borodai and others – were removed by Moscow after the downing over militant-controlled territory of Malaysian airliner MH17   , and the subsequent hardening of the West’s position and imposition of real sanctions. Russia has continued to deny its involvement and it simply wouldn’t have looked good if the militant leaders at the Minsk negotiations in September 2014 were Russian.

It is internationally recognized that huge numbers of Russian military personnel are taking part in the conflict in Donbas, as well as thousands of Russian fighters, most of them there for money. Whose ‘home’ are they defending?

Many members of the first Ukrainian volunteer battalions, as well as soldiers in the Ukrainian Army are themselves from Donbas, and are most certainly defending their homes.  Ukrainians who were forced to flee from Sloviansk when Girkin and his fighters seized control spoke of how they could hear from the accents that most of the men were not local.  Ukrainians from Dnipro (formerly called Dnipropetrovsk), Lviv and Kyiv are defending their Ukrainian land in an undeclared war which is manned, funded and armed by Russia.

The militants have also been shelling cities under Ukrainian government control. Avdiivka came under sustained attack from January 29, with most commentators in Ukraine and abroad noting that this was less than 24 hours after Russian President Vladimir Putin and his US counterpart Donald Trump held a first telephone conversation. Russia has claimed that Ukraine ‘provoked’ the shelling, though in fact the moves the Ukrainian military have made were to push back militants from territory they had seized in breach of the Minsk Agreement.

Zakharchenko is not alone in claiming that it’s alright to shell ‘your own territory’. During the siege of Debaltseve, Edward Basurin, a militant commander, told Reuters: "Of course we can open fire.  It’s our territory. The territory is internal: ours. And internal is internal”.

Worth recalling some important facts about the capture of Debaltseve.  This strategic railway hub was under Ukrainian government control as per the Minsk II Agreement on Feb 12, 2015.  It was finally seized by Russian and pro-Russian troops six days later, despite the agreement entailing a full ceasefire.

The militants had from the beginning of this so-called ceasefire refused to allow the OSCE monitoring mission into Debaltseve.   The reason was simple.  Both Zakharchenko and Basurin had stated shortly after the officially agreed start of the ceasefire that the militants would not be observing it in Debaltseve.

In February 2016, the Conflict Intelligence Team (CIT) published a report in Russian and English, in which they presented grounds for concluding that it was Putin himself who issued the order for the offensive on Debaltseve.

It is the clear evidence of massive Russian involvement and, indeed, control of the conflict in Donbas which makes the trial at the International Criminal Court of individuals like Zakharchenko so important.  Judging by the number of leading militants who have been killed or died in unexplained circumstances in Donbas or Russia, others are also aware of the importance of such testimony.