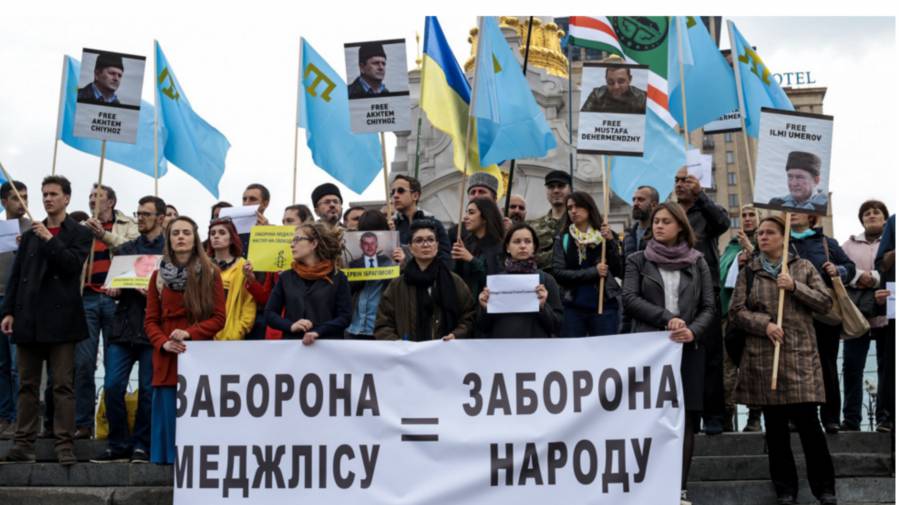 Russia’s attempts in its opening address to deny that Ukraine’s suit falls within the International Court of Justice’s jurisdiction was anticipated, as was the claim that Ukraine had not gone through the proper arbitration process before applying to the Court.  Slightly less predictable was the strange similarity with Russian state-controlled media – the same carefully chosen facts, deft omissions and flagrant distortions.

Roman Kolodkin, the Russian foreign ministry’s legal director, began by asserting that Ukraine had brought two separate claims in order to artificially connect two entirely different situations – in Donbas and in Crimea.  He claimed that this was done deliberately in order to drag the Court into ruling “on issues between Ukraine and Russia that are clearly beyond the court’s jurisdiction in this case.”

Not unexpectedly, Russia denies everything.  There is, they claim, no discrimination in Crimea, and no evidence that Russia is in any way financing terrorism, through significant support for militants in Donbas.  With respect to the latter, Kolodkin claimed that Ukraine was simply “stigmatising a significant part of the Ukrainian population who had self-organized to form the Donetsk and Luhansk people’s republics’ [DPR, LPR] as terrorists, and the Russian Federation as sponsor of terrorism”.

With respect to ‘self-organization’, it is worth noting that the same Russia former military intelligence officer Igor Girkin [Strelkov] who, together with other Russian and pro-Russian paramilitaries, helped Russian soldiers to seize control of Crimea, then moved into the Donetsk oblast.  After seizing control of Sloviansk and other cities, Girkin became the so-called defence minister of DPR, while another Russian Alexander Borodai called himself prime minister.   They were replaced by ‘locals’ shortly after militants downed Malaysian airliner MH17 using a Russian Buk missile.

There is considerable photo, video, satellite, witness testimony and evidence linked with soldiers killed to prove the extensive involvement of Russia in the military conflict in Ukraine, with few believing that it would continue at all, if the Russian fighters, weapons and money suddenly stopped coming.

Russia’s claim to the Court that there are no grounds for the provisional measures Ukraine is seeking, with these including stopping the flow of heavy military equipment, weapons, etc. is hard to take seriously.

There were some totally absurd moments, like when amother member of the Russian team Ilya Rogachev claimed that the militants had ‘found’ weapons stored back in Soviet times inside Donbas mines, and that some of the militants’ vast supplies of weapons had been left by the Ukrainian army.  .

Samuel Wordsworth, a British lawyer representing Russia, mentioned that his client disputes the blame placed on Russia by the international Joint Investigation Team.  Russia has expended great effort on producing all kinds of counter-theories, none of which has been accepted by the international investigators.  Wordsworth has presumably understood that mere denial is useless and the argument to the Court seems to be challenging intent to kill civilians.

“There is no evidence, plausible or otherwise, that Russia provided weaponry to any party with the intent or knowledge that such weaponry be used to shoot down civilian aircraft,” he said.

It can, and surely will, be argued that the Russian defence ministry must have been involved in providing Buk surface to air missile launchers to unrecognized militants in a country with which Russia is not formally at war.  The weapon can be, and tragically was, used to kill civilians, with Russian television trying to remove evidence reported of the militants’ involvement, and the Buk itself being hurriedly sent back to Russia.

Russia is also claiming that no other country has accepted Ukraine’s classification of the militants as terrorist organizations.  In fact, the United Kingdom is currently prosecuting Ben Stimson on terrorism charges over his involvement in the fighting in Donbas.  Estonia has, in its turn, extradited an Estonian citizen Vladimir Polyakov to Ukraine to face similar charges.

Russia has since the tragic disturbances on May 2 been pushing false claims about the events and claiming there was a ‘massacre’ of anti-Maidan activists.  Kolodkin even claimed that pro-Ukrainian activists had initially attacked their opponents, although this was totally refuted by the Council of Europe’s International Advisory Panel.  The latter also found no evidence of any ‘massacre’, yet Russia has continued lying ever since, with even the Court in the Hague no exception (more information here).

Russia has consistently tried to blur the chronology of events in Crimea, though Grigory Lukyantsev went one step further on Tuesday.  There was no mention of the Russian soldiers who seized control on Feb 27, 2014 at all, just claims of fears of violence and a supposedly Crimean decision to hold a ‘referendum’.

There was equal manipulation over denials of any discrimination of Crimean Tatars and ethnic Ukrainians.  There is so much evidence, largely compiled by human rights activists, and confirmed in international reports, that it seems sufficient to say that Russia denies it all.

There was, however, one especially foul lie.  Russia’s banning of the Crimean Tatar Mejlis or self-governing body of the main indigenous people of Crimea has been internationally condemned.  Lukyantsev came out with claims about it having supposedly been involved in violence in 1992, and having then continued ‘acts of violence’ in 2014.   All were manipulative and false, but one especially unpleasant.  World-renowned Crimean Tatar leader Mustafa Dzhemiliev was banned from his homeland on April 22, 2014, with this being enforced on May 2.  The Mejlis responded by cancelling the traditional Spring festival the following day and calling on Crimean Tatars to come and meet Mustafa Dzhemiliev at the Armyansk border crossing.  They were confronted there by huge numbers of riot police and soldiers, and Dzhemliev decided to return to Kyiv to prevent bloodshed.  This was one of numerous examples where the occupying authorities used gratuitous demonstrations of force, possibly to provoke violence and then crush it.   The Mejlis has consistently upheld its policy of non-violent resistance and the claims were manifestly false.

Mustafa Dzhemiliev was just 6 months old when he was first banished, together with the entire Crimean Tatar people, from their native Crimea.  Russia’s ban, just two months after its invasion, came shortly before the 70th anniversary of the Deportation, a day of remembrance for all Crimean Tatars.  The occupation regime that year, and since then, has banned all or most gatherings on the anniversary, as well as many other days of importance for Crimean Tatars.  Crimean Tatars have been detained each time and faced administrative proceedings.  Even the smallest gatherings of Ukrainians around the anniversary of Taras Shevchenko’s birth have been banned for the last two years.  The gathering on March 9, 2015 resulted in four men being detained and later sentenced to periods of community work for “a prohibited symbol” – the Ukrainian flag.

Russia, as mentioned, denies any discrimination or repression.