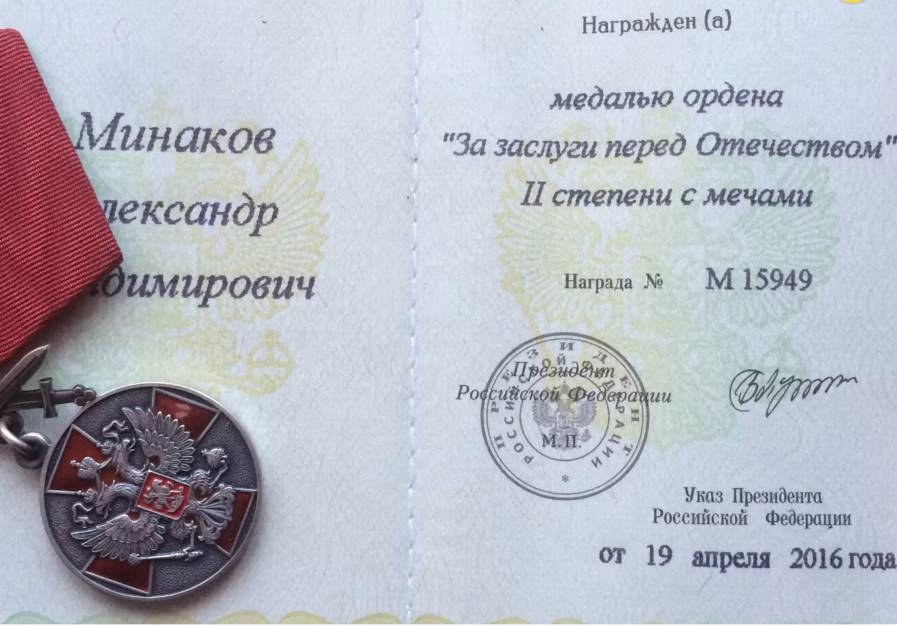 Further evidence has emerged of Russian military personnel directly involved in the battle for Debaltseve in February 2015.  The incriminating evidence this time is an award “for services to the Fatherland”, with the recipient, Alexander Minakov, a person first mentioned in a much earlier report exposing the heavy military involvement  Russia is continuing to deny.  The information is of importance since the fighting to capture Ukrainian government-controlled Debaltseve continued after Russian President Vladimir Putin agreed a ceasefire as part of the Minsk II Agreement on Feb 12, 2015, and investigative journalists have provided evidence suggesting that it was Putin himself who ordered the offensive against Debaltseve.

InformNapalm has been looking for evidence of Alexander Minakov’s involvement in Donbas since Novaya Gazeta published an important interview with Dorzhi Batomunkuev, a soldier from the 5th separate tank brigade, based in Ulan-Ude.  The 20-year-old received horrific burns while manning a tank which came under fire.  Batomunkuev’s account is extremely important since, unlike some other contract soldiers who repeat the official Russian line about being ‘on leave’ or having ‘resigned’, he does not deny that he was an active Russian Federation military serviceman.  A large number of soldiers, like , were Buryats and were therefore easily identifiable as not being Ukrainian, so his admission that he was from the Russian military was damning.  He told Novaya that he had been sent in October as part of a tank battalion with around 120 men and 31 tanks to the Rostov region in Russia.  They had painted over numbers, signs, etc. on the tanks that would identify them while still in Ulan-Ude.

They were sent to Donbas on Feb 8, 2015.  Typically, they were forced to leave mobile telephones and documents behind.  This is not just so that if the men are killed or captured, they cannot be easily identified.   Soldiers’ penchant for posting photos of themselves on social networks from their illegal Ukrainian location has also been of great importance in giving the lie to Russia’s denial of involvement.

InformNapalm writes that it was the interview and Batomunkuev’s mention of another badly wounded Russian tankist, that made them follow Alexander Minakov.  Up till recently, however, they had found nothing on the man’s social network page proving that he had been in Donbas.

Then, just over a year later, Minakov posted the above-mentioned medal ‘For services to the Fatherland, Grade II’.  The award is with swords and only given to military servicemen, and although it does not indicate what the ‘services’ were, Minakov lost part of his leg at Debaltseve, so they cannot have come later. The medal is dated April 19, 2016, and signed by Putin.   It was soon afterwards deleted from VKontakte, and probably also from Odnoklassniki, but a screenshot had been made and archived.

Russia has not declared war against Ukraine, and its continued substantial provision of heavy military equipment, ammunition and fighters is part of a suit brought by Ukraine with the UN’s International Court of Justice in the Hague. While one of the members of the Russian team avoided denying the essentially proven fact that it was a Russian BUK missile provided from Russia that downed the MH17 Malaysian airliner on July 17, 2014, one of the other members tried to claim that the Kremlin-backed militants are getting their weapons from Soviet stocks left in Donbas mines.

The denial of Russia’s military engagement is especially lacking in credibility given numerous reports of soldiers’ deaths, the sharp increase in the number of soldiers’ deaths during the period when Russian involvement was first reported,  the role played by the two military intelligence officers Yevgeny Yerofeyev and Alexander Aleksandrov,  reports from soldiers themselves., not to mention reports from NATO, the USA, Amnesty International, etc., all based on satellite observations.

In a report published in Russian and English in early February 2016, Ruslan Leviev and his Conflict Intelligence Team set out evidence that Russian Defence Minister Sergei Shoigu personally gave a watch to a Russian soldier being treated in a Moscow hospital for wounds received in the battle.   They too had come upon Yevgeny Usov from the 6th separate tank brigade from Russia’s Nizhny Novgorod Oblast  via social network posts (VK.com profile  Saved copy).  CIT believe that Shoigu’s attention indicates that Usov was involved in an important battle.

Debaltseve is a strategic railway hub which was finally seized by Russian and Russian-armed troops on Feb 18, 2015, 6 days after Putin concluded the Minsk II agreement with the leaders of Ukraine, France and Germany.   That agreement involved a total ceasefire.