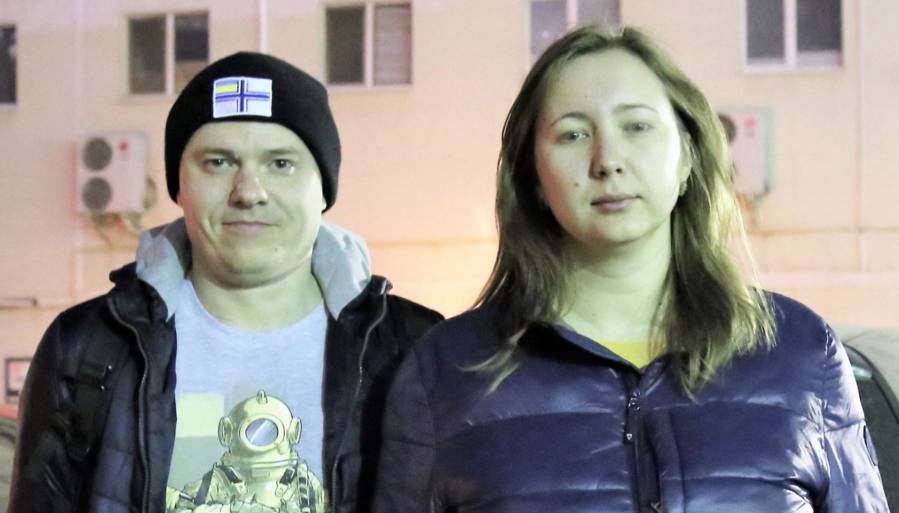 The Coordinator of the Crimean Human Rights Group and two other rights activists detained by armed FSB officers and illegally held for 7 hours near the Crimean border may have been deliberately tricked to provide a pretext for their detention.  They were, thankfully, released, but the incident remains of great concern.

Three years after Russian soldiers without insignia invaded Crimea and forced human rights activist Olha Skrypnyk to leave her homeland, she and two colleagues were stopped by Russian FSB officers brandishing machine guns who also proved unwilling to identify themselves.  Throughout the seven hours the three were held in FSB custody, Skrypnyk was repeatedly told by various individuals that they held positions that did not allow them to given their names.

Olha Skrypnyk, Coordinator of the Crimean Human Rights Group, her colleague Volodymyr Chekryhin and Karen Khataryan, a representative for Ukraine’s Human Rights Ombudsperson, had come to carry out regular monitoring of the Ukrainian border crossing checkpoint at Kalanchak.  It was initially reported that they had been stopped in a kind of buffer zone between the checkpoints controlled by Ukraine and by Russia.

In fact, there is no real buffer zone as such, with the area illegally occupied by Russia and that unquestionably under Ukrainian control marked by respective flags.  Or at least, they are normally.  For a reason that none of the FSB men felt able to explain, the Russian flag had been removed before the activists arrived.  There was no reason for them to notice, and after having carried out their monitoring, they set off to return.  As they tried to turn their car around, they were stopped by 7 men with machine guns.

Skrypnyk told Krym.realii that they initially had no idea who the armed men in camouflage gear were.  They were literally two metres away from the Ukrainian flag, and didn’t realize they had crossed into territory under Russian control, until they saw an FSB chevron on one of the armed men’s shoulder.

The FSB men refused to identify themselves, claiming that they were a special FSB group who are not obliged to do so, and are not at the checkpoint either as border guards or customs officers.

As Skrypnyk notes, that means that even according to Russian legislation, their legal status was a mystery.

There was an initial impasse, and they continued to sit in the car, but then a vehicle with Russian number plates turned up and they were ordered to move the car.  Skrypnyk rightly refused, having no intention of moving onto the territory under Russian control, and the car remained between the two checkpoints over the entire 7 hours.  She stresses that from the point of view of Russian legislation, neither the car, nor they at any point crossed over the de facto Russian checkpoint.

They were separately questioned, with the man carrying out the interrogation also refusing to identify himself.  The most they ever got from him was his first name Anton, and that he was an FSB officer, but not his department.

The officers behaved themselves, however their behaviour, and the interrogations were illegal with the activists never told why they were being questioned.

An administrative protocol had been drawn up into a supposed breach of the rules around a checkpoint and they had provided the necessary explanation.  Any further questioning was entirely redundant.  Skrypnyk says that the man asked her what her job was, whether she writes articles for the press, whether she criticizes Russia, why she left Crimea, etc.  He also asked her to give an assessment of the socio-political situation in Crimea.  She refused, saying that this was not the subject of discussion with the FSB.  “Why not?”, he asked, saying that they were simply having a “friendly chat”.  There is no such thing as a friendly chat with the FSB, she replied.

The Russian flag was in place when they left, with the FSB man confirming that it had been removed, but unable to provide a sensible reason as to why. The FSB said that they were not the first people to have crossed into Russian-controlled territory without realizing it, so perhaps this trick with the flag has been played before. The activists have pointed out to the Ukrainian border guards that there must be some kind of marker to warn people

It does seem possible that there was a deliberate trap with Skrynyk and / or the Crimean Human Rights Group targeted. As initially reported, Skrypnyk is well-known for her tireless monitoring and reporting on human rights violations under Russian occupation.  The 7-hour detention came only days after the hearings at the European Court of Justice at the Hague into Ukraine’s suit against Russia.  Skrypnyk and other human rights activists played a major role in preparing the government’s case, at least as far as rights violations in Russian-occupied Crimea are concerned.

If they had been detained briefly, but then released, suspicion might be unwarranted.  Here, however, they were held, in a state of uncertainty, for seven hours.  At one point a car arrived and for a while it seemed that they were going to be taken away, presumably into Russian-occupied Crimea.

There have been numerous occasions where Ukrainians who are simply visiting family in Crimea have been subjected to searches or detention and Skrypnyk’s group have been active in advising Ukrainians travelling to Crimea how to stay safe.

The original group, called the Crimean Human Rights Field Mission – was in July 2015 placed on Russia’s so-called “patriotic stop list” of foreign NGOs likely to be deemed ‘undesirable’ and effectively outlawed in Russia and Russian-occupied Crimea.

The Crimean Human Rights Group has so far not elicited the same response, but Skrypnyk would be a clear target for the FSB and the events on Monday are extremely worrying.