Ukrainian citizens are now a group at risk in Russian-occupied CrimeaRussia backtracks over Ukrainian citizenship in CrimeaRussian, or else: On how Russia is foisting its citizenship in CrimeaCrimean Tatars and others face citizenship dilemmaRussian methods: Calls for Crimea’s return to Ukraine could get you imprisonedMGIMO historian fired for article comparing Crimean annexation to Hitler’s AnschlussInformation channels at warDonetsk Front in Putin’s Dirty WarScurrilous rumours used to spread fear and distrust in Eastern oblastsAutoMaidan activist shot at near ChongarRussian troops already deployed in mainland UkraineThe Crimea is our Home: Get your troops out!Crimean "referendum" a grotesque farceCrimean Tatars call on all Crimeans to boycott "referendum"Avoiding Ukraine’s language minefieldsChief Rabbi and others dismiss Putin’s “anti-Semitic extremist” claimsRussian propaganda must be challengedWestern Media: Don’t distort the situation in Ukraine!Russia’s aggression poses dangers beyond Ukraine’s bordersCrimea: Anti-Semitic card and other provocation in time of siege
• Topics / Politics and human rights
• Topics / Freedom of movement 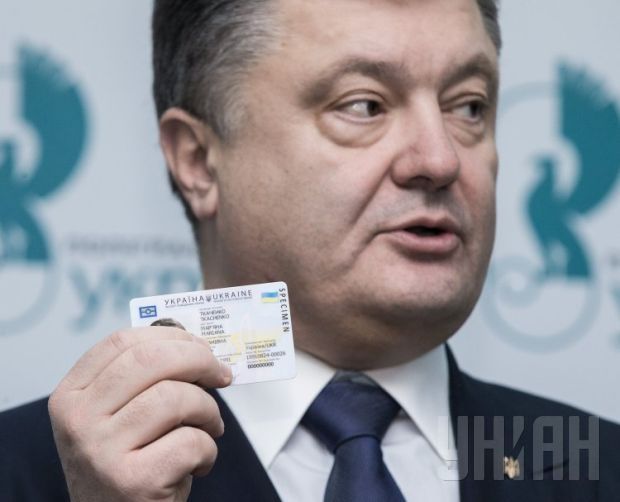 Ukraine’s President Petro Poroshenko has tabled as urgent a draft law which would automatically strip Ukrainians of their citizenship if they voluntarily took on citizenship of another country.  Draft law No. 6175 has been condemned by many Ukrainians living in other countries, and could also potentially create enormous problems in parts of Ukraine where Russia has long been trying to stir up tension.  Myroslava Gongadze has called it a “fatal mistake” and a group representing Ukrainians abroad has called for its withdrawal.

The bill was tabled just days after the scandal around the detention of former tax chief Roman Nasirov.  One of the reasons the prosecutor insisted on his detention was Nasirov’s apparent triple citizenship  - Ukrainian, British and Hungarian.  Ukrainska Pravda has also posted a document which they allege is a list of ‘guidelines’ from the President’s Administration on how media issues should be presented.  According to this, coverage of the draft bill should focus on various oligarchs, like Ihor Kolomoisky, who are known to have more than just Ukrainian citizenship.

It is not guaranteed that the law would have any real impact in those cases, but it could potentially affect a very large number of other Ukrainians.

Article 4 of Ukraine’s Constitution states that there is single citizenship in Ukraine, and that grounds for both acquisition and termination of such citizenship are determined by law.  Article 25 stipulates that a citizen may not be deprived of their citizenship, or of the right to change it.

The law on citizenship does not, in fact, clarify all that much, though Article 19 of the Law states that grounds for losing Ukrainian citizenship include an adult’s voluntarily acquisition of another country’s citizenship.

Otherwise the law only really covers the issue of legal answerability with the principle the same as in countries which recognize double citizenship.

Poroshenko’s law would add a mechanism for implementing the norm about losing Ukrainian citizenship if you voluntarily become a citizen of another country.  Crimea under Russian occupation is excluded.  Russia has made it extremely difficult to get work, medical cover, education, etc. without a Russian passport and it would be totally wrong to call this ‘voluntary’ acquisition of Russian citizenship.

The bill has been reported, particularly by MPs, as preventing high-ranking officials from being citizens of other countries.  In fact, Article 19 of the Law on the Civil Service already prohibits a civil servant from having dual citizenship. And Article 84 even stipulates that infringement of this constitutes grounds for dismissal.  Why not simply introduce proper mechanisms for enforcing the existing norms?

Instead, the law proposes to regard any person who voluntarily took another country’s citizenship as having waived their own, Ukrainian, citizenship.  The civic initiative Razom for Ukraine has estimated that around 5 million Ukrainians could thus be automatically stripped of their citizenship.  They point out that Ukrainians abroad have always played a major role in Ukraine’s development and during periods of occupation preserved the country’s legal and cultural traditions.  The list of ways in which Ukrainians abroad have helped Ukraine financially, politically, and lobbied for its interests, is formidable and it is understandable that many should view this bill is a stab in the back.

“At a time when the Russian Federation is occupying a part of Ukraine’s territory, and of military conflict in eastern oblasts, we see the President’s actions as running counter to Ukraine’s interests.”  They call on the President to withdraw the bill and ask MPs, if it is not removed, to not support it.

Ukrainska Pravda has pointed out that there are very large numbers of members of two national minorities who could also, while living in Ukraine, find themselves stripped of their nationality!

In the same article, Serhiy Sidorenko points to another absurdity, namely that the law will likely prove enforceable against Ukrainians living in the EU or Canada, but will be meaningless in the case of people holding Ukrainian and Russian citizenship.

It was, for example, by sending requests for information to the relevant departments in other countries that the Anti-Corruption Bureau gained information about Nasirov’s British passport.

The one country that can be guaranteed not to cooperate is the Russian Federation.  It should also be noted that the absence of Russian citizenship would not necessarily hinder a public official from going into hiding in Russia.  As well as ex-President Viktor Yanukovych and his people, a large number of Berkut riot police officers suspected of violent crimes against Maidan activists, found shelter in Russia.  Most received citizenship very rapidly.

With respect to Romanian and Hungarian Ukrainians, the law can only be considered a gift to Russia which has assiduously tried to ferment – or simply invent - anti-Ukrainian ‘separatism’ in those areas.  With respect to other Ukrainians, many now feel betrayed.