Yanukovych ‘doesn’t remember’ the bloodiest day of Maidan killingsPolitical PR & sabotage instead of real investigation on eve of 2nd Maidan anniversaryUkraine’s only trial over Maidan killings under threatPolice & judges accused of impeding prosecution of crimes against Euromaidan activistsAnother person charged with Euromaidan crimes allowed to escape?Ex-Security Service chief in custody over Euromaidan killingsSo who doesn’t want justice for Euromaidan victims?High-ranking Berkut officer charged over Euromaidan killingsEuromaidan: A Year of Impunity and what went wrongEx-Berkut officer on trial over AutoMaidan ambushEx-Berkut officers arrested on suspicion of involvement in Maidan killingsWhere are 13 mysterious Berkut sniper suspects?Who (hasn’t) answered for crimes against Maidan?Maidan killings suspect missing after being released from custodyTwelve detained on suspicion of involvement in the gunning down of Maidan protesters (updated)Blood and Berkut Sniper Bullets on the President’s HandsMustafa Dzhemiliev on Maidan: I’m proud of you, dear fellow UkrainiansBerkut snipers aimed at protestersWaiting for more bloodshed?Open threats and covert plans as ‘hostage law’ deadline nears
• Topics / Politics and human rights 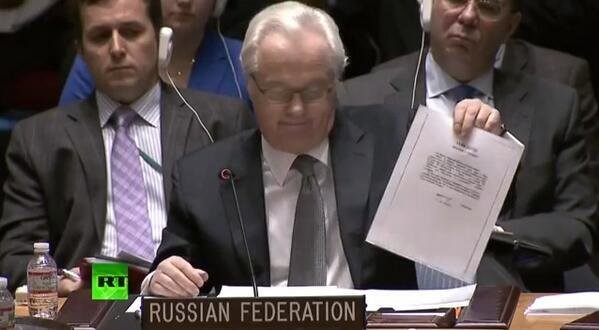 It is amazing what the death of a Russian UN ambassador can achieve.  Russian President Vladimir Putin’s press secretary Dmitry Peskov is now claiming that the Kremlin never received a letter from ex-Ukrainian President Viktor Yanukovych, asking Russia to send in troops to Ukraine.  The Russian Prosecutor General recently issued a similar denial.  So what precisely did the now deceased Vitaly Churkin wave about at the United Nations, claiming that it had been received on March 1, 2014, and why did Russian President Vladimir Putin himself speak of such an appeal from Yanukovych as grounds for the deployment of Russian forces?

The most direct mention of the letter was during an emergency session of the UN Security Council. Since this was called by Russia, it is inconceivable that Churkin had not agreed his position and the supposed backing for it provided by the Yanukovych letter with Moscow.

Churkin specifically stated that the letter is dated March 1, 2014.  This is very important since it was precisely on that day that Putin asked the upper house of Russia’s parliament for permission to deploy forces in Ukraine.  This was supposedly “in connection with the extraordinary situation in Ukraine and the threat to the lives of Russian citizens".  Permission was swiftly provided.

During a press briefing on March 4, 2014, Putin stated the following: “What could serve as grounds for the use of the Armed Forces?  This is, of course, an extreme situation, simply extreme. It is firstly an issue of legitimacy. As you know, we have a direct appeal from the current and legitimate, as I have already said, President of Ukraine Yanukovych, about the use of Armed Forces for the defence of the life, freedom and health of Ukrainian citizens …. And if we see that this lawlessness is beginning in eastern regions, if people ask us for help, and we already have an official appeal from the current legitimate president, we reserve the right to use all means at our disposal to protect these citizens. And we consider that this is entirely legitimate.  That is an extreme measure.”

All of this came just days after Russian soldiers without insignia seized control in Crimea.  Russia long denied that the soldiers were Russian, then Putin himself admitted that the plans for ‘intervention’ had begun many days earlier.

Yanukovych fled Kyiv in the evening of Feb 21, 2014, and is now in hiding in Russia, where he is periodically brought out to parrot the Kremlin line on developments in Donbas and Ukraine in general. Ukraine’s parliament has just passed a flawed bill enabling the ex-President to be tried in absentia, and one of the pieces of evidence of treason that Ukraine’s Prosecutor General Yury Lutsenko has cited is the alleged letter to Putin.

The ‘proof’ of the letter had, in fact, always seemed questionable, since Ukraine received only a faxed copy which had been passed by Churkin to the UN office.  TASS reports that at an interview on Feb 22,  2017, Yanukovych denied having asked Russia to send in forces, though in fact he does not deny writing something, saying: “It firstly wasn’t a letter, but a statement…”

Now the Kremlin is denying receiving anything, whether letter or statement.

Churkin is dead and therefore conveniently unable to confirm or deny anything.

He was, however, Russia’s Ambassador to the UN throughout this period, and the claims he made and the document he brandished about were widely published by Russian and pro-Russian media.  The Kremlin-funded Russia Today, for example, gave it very considerable coverage on March 3, reporting that Churkin showed and read out excerpts of the letter.

“ Vitaly Churkin says ousted Ukrainian President Viktor Yanukovich has sent a letter to Putin asking him to use military force in Ukraine to restore law and order.  "Under the influence of Western countries, there are open acts of terror and violence," Churkin quoted the letter from Yanukovich to Putin in the third emergency meeting of the UN Security Council.  "People are being persecuted for language and political reasons," Churkin read. ”So in this regard I would call on the President of Russia, Mr. Putin, asking him to use the armed forces of the Russian Federation to establish legitimacy, peace, law and order, stability and defending the people of Ukraine."

After reading the letter, Churkin held up a copy of the original letter from Yanukovich to Putin for council members to look at.”

News of the Yanukovych letter, real or fictitious, was carefully timed to coincide with a carte blanche given Putin to send troops, without any declaration of war, into another country’s sovereign territory.

It should be noted that the theme of such ‘calls to bring in troops’ has emerged many times over the last three years.  Embarrassing details about how the calls were organized can be found in the ‘Glazyev tapes’.  These are intercepted calls between Sergei Glazyev, a senior Putin advisor and various individuals, including some ‘pro-Russian activists’ discussing the organization of pro-Russian uprisings.

Glazyev, and it is recognisably him, can be heard clearly articulating the position that all uprisings need to appear to come from locals, with it particularly desirable for councils, etc. to appeal to Russia to intervene.

One of the conversations on the situation in Odesa is with Denis Yatsyuk, one of the people ready to storm the administration and appeal for ‘help’ to Russia.  Yatsyuk tells Glazyev that there are people, but they need guarantees, and is told by Glazyev not to worry, because the Council of the Federation (Russia’s upper house) has just rubberstamped Putin’s decree.  It is clear from Glazyev’s reassurances that the decree allowing deployment of troops is meant.  He stresses that there need to be mass appeals directly to Putin asking him and Russia to defend them.  They must, however, also organize a decision from an extraordinary session of the regional council.

This was exactly what the activists attempted to do.  The attempt failed thanks to pro-Ukrainian deputies, but the evidence all clearly shows that they were trying to produce the scenario which Glazyev had outlined.

The Yanukovych letter was equally part of an orchestrated plan.  Certainly if Yanukovych’s signature could be proven on a letter received by the Kremlin, it would be a huge indictment against him – whether or not he had written it under Putin’s dictation.  It seems unlikely, however, that it is Yanukovych that the Kremlin would be seeking to protect.

Churkin died extremely suddenly on the eve of his 65th birthday, on Feb 20, 2017.  The cause remains unclear, though the official version appears to be heart failure.

A day after Peskov publicly stated that no letter “or any similar document” had been received by the Kremlin, Marina Zakharova, spokesperson from the Foreign Ministry, has presented a new version of the facts.   She claimed that there was no letter, just a “statement” that Yanukovych had never denied signing.  The semantics here are difficult to take seriously, especially given that Putin clearly stated that Russia might use troops and be justified since there was an appeal (обращение)  from Yanukovych.