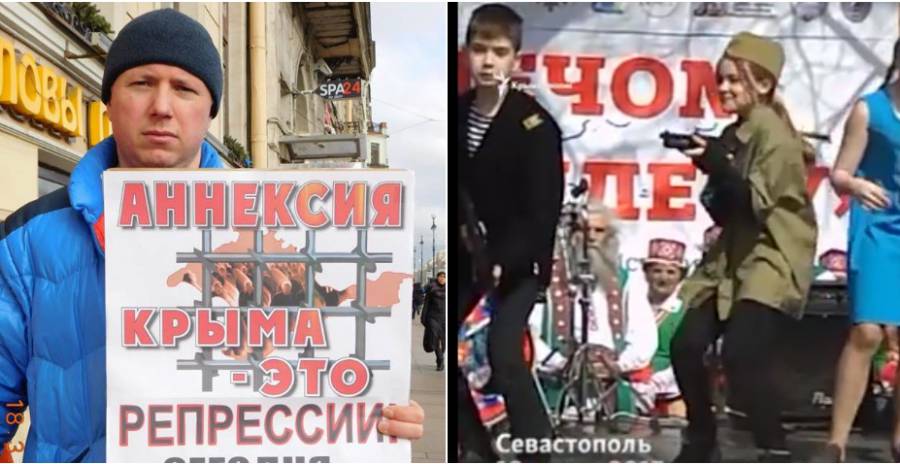 A choreographed performance with children dancing about with machine guns was perhaps the most shocking part of the state-organized festivities in Russian-occupied Crimea, marking the third anniversary of Russia’s annexation.  Difficult not to shudder also at the image of Russian-installed Crimean leader Sergei Aksyonov, flanked by the leaders of the Kremlin-backed militants in Donbas, all crossing themselves in unison.

There were, however, voices in opposition, each of whom was unwilling to remain silent despite the likelihood of criminal charges or administrative detention.

Crimean Tatar Mejlis leader Ilmi Umerov is already facing trial for saying that Russia must be forced to leave Crimea and Donbas.  The 59-year-old is in poor health, preventing Russia from imposing the mandatory 5-year sentence for what it claims constituted “public calls to action aimed at violating Russia’s territorial integrity’.

Umerov has refused to be silenced, and for this ‘holiday’ gave a blistering account of Russia’s invasion, pseudo-referendum as background for this so-called ‘reunification’.

Over the past three years, he writes, terror against dissidents has become standard in Crimea with arrests, searches, killings and disappearances, as well as persecution for independent views and activity on social networks.

Like the UN, the EU and the entire international community, “I do not recognize the March referendum of 2014, the so-called ‘reunification’ and all linked with it.  I would like the reinstatement of the rights of the Crimean Tatar people in a Crimean Tatar Autonomous Republic within Ukraine.”

There were Russians who added their voice to the protest in Moscow and St. Petersburg.  A group of civic activists in St. Petersburg announced a picket in support of Crimean Tatars, as part of an initiative entitled ‘Strategy 18’.  The number marks two tragic dates – the Deportation of the entire Crimean Tatar people which began on 18 May 1944 and Russia’s annexation of Crimea.

This is a shameful date in the history of the Russian Federation, is how one of the activists called the anniversary.  The protesters declared their solidarity with Ukraine and the people of Crimea, in particular the Crimean Tatars who had not supported a change in Crimea’s status.  They expressed the hope that those guilty of war crimes would answer for them.

One protester was detained on March 16, the anniversary of the pseudo -referendum, but no arrests were reported on Saturday.  The number of people willing to come out with such a position in Russia remains small and the hype and propaganda in 2014 have clearly had a major impact.  A recent Levada Centre survey found a greater number of Russians expressing ‘pride’ in Crimea’s so-called ‘reunification’ than in the country’s space program.

Both Russia and occupied Crimea got a day off (on Monday) for this anniversary.  How many would voluntarily turn up for demonstrations on Saturday to ‘celebrate’ cannot be known.  The Russian authorities clearly didn’t want to rely on enthusiasts and imposed quotas on universities who were instructed to send a certain number of students to participate.  There weren’t necessarily immediate penalties if students refuse, but they understand well enough that there could be later repercussions. The same applied to public sector workers. Caucasian Knot reports that, as well as students, they too were handed flags and forced to stand outside for an hour during the official ‘celebration’ in Grozny.

Worth recalling that Russia made grandiose claims about its so-called ‘referendum’ on March 16, 2014, but it only invited far-right politicians or others known for their pronounced pro-Russian views to act as ‘observers’.  Even then, it proved necessary to falsify the results, with even Putin’s own Human Rights Council acknowledging that a majority throughout Crimea did not support annexation (details here).

Krym.realii reports that in Sevastopol there was a meeting, attended by Russian President Vladimir Putin’s friend and favourite biker Alexander Zaldostanov, at which people held portraits of Putin and read out poems about ‘reunification’.  Members of the so-called Crimea self-defence appear to have received awards.  The term ‘self-defence’ is rather dubious, since these were armed paramilitaries who are believed to have taken part in abductions, enforced disappearances, hostage-taking, torture and the killing of Reshat Ametov, who was seized on March 3 from his solitary protest outside parliament.  Some of those who led them, like Russian former military intelligence officer Igor Girkin then turned their attention and weapons on eastern Ukraine. The current Kremlin-backed militant leaders from Donbas – Alexander Zakharchenko and Igor Plotnitsky were present at the formal ceremonies in Simferopol.

One of the developments in Crimea under occupation which has long concerned human rights groups is the increasing militarization of childhood, with Crimean children being fed a narrative about the heroic nature of war, and themselves often taking part in militarized games or training.

At a concert in Sevastopol, you hear young girls singing: “My country, my fate, my dream, my war”.  At that point, other children burst onto the stage waving mock machine guns around, with a culminating point seemingly the girls prancing about with Russian flags.