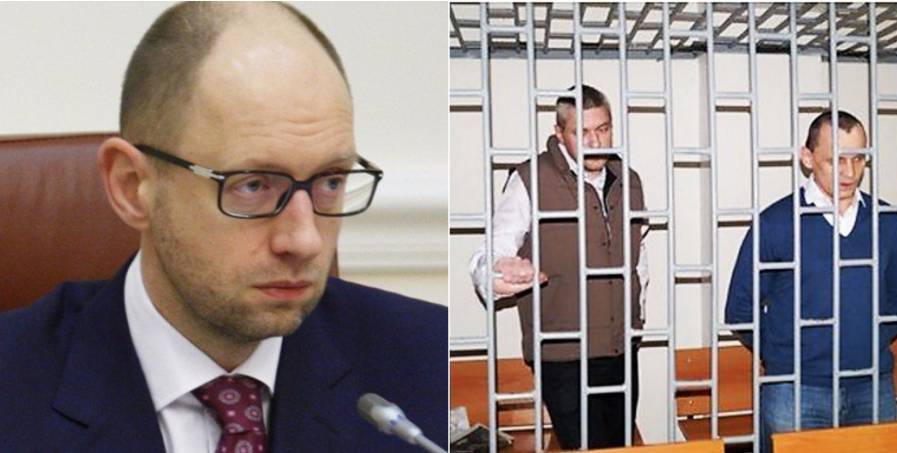 A Russian court has issued an ‘arrest warrant’ on ex-Ukrainian Prime Minister Arseny Yatsenyuk, claiming that he was placed on the international wanted list on Feb 21, 2017.  There is no evidence that Interpol knows it is supposed to be looking for Yatsenyuk, and every reason to assume they would refuse to do so.  The charges are almost certainly based on ‘confessions’ tortured out of two Ukrainians whom Russia was holding totally incommunicado and retracted as soon as Stanislav Klykh and Mykola Karpyuk were finally given access to real lawyers.  It is not only the men’s word on this, since the authoritative Memorial Human Rights Centre demolished the charges which clash irreconcilably with proven historical facts.

The Yesentuki City Court reported on March 27 that it was issuing the arrest warrant in absentia on the basis of an application from a Russian Investigative Committee investigator “on particular important cases’.  The charges are identical to those brought against Klykh and Karpyuk over supposed involvement in the fighting in Chechnya against Russian federal forces in late 1994 and early 1995. They include: taking part in a gang and its attacks; the murder of two or more people in connection with their carrying of official duty, and attempts to commit such murder (multiple parts of Articles 209 and 102 of the Russian criminal code, and 102 of the Russian SSR criminal code).

The first public claim that the then Prime Minister Yatsenyuk had fought in Chechnya came in September 2015 in an interview given by the head of the Investigative Committee Alexander Bastrykin.  The latter treated the involvement of Yatsenyuk and other prominent Ukrainians as established fact and claimed that Yatsenyuk had tortured and murdered Russian soldiers.  No convincing evidence was provided for the extraordinary allegations and Internet users reacted with wild mirth and a flood of hilarious photoshop images of Yatsenyuk as Chechen fighter.

The reality was anything but amusing since Klykh had given his ‘confessions’ after being seized from a hotel, then held for 10 months incommunicado, and subjected to terrible torture.  Karpyuk’s experiences was similar except that he was secretly held for over a year and a half.

A third Ukrainian’s testimony is generally also cited.  Olexander Malofeyev was sentenced in October 2010 to 24.5 years’ maximum security for his supposed part in the fighting in Chechnya.  Malofeyev had long lived in Russia, where he was already serving a 23-year sentence. He is also a drug addict with several life-threatening illnesses meaning that pressure could easily be exerted by taking away his medication.

Memorial HRC and Ukrainian activists have found major inaccuracies regarding Malofeyev’s account of historical details, and he can in no way be considered a reliable source.  It is likely that the stunt with his ‘trial’ on the allegedly ‘newly exposed information’ was attempted purely as a prelude to the trial about to begin in Chechnya of Karpyuk and Klykh.

Evidence was provided during the trial proving Klykh had been taking exams at university in Kyiv during the period when he was supposed to be running around Chechnya killing soldiers, while Karpyuk had been looking after his dying mother.

A leading Memorial figure spoke during the court trial in the men’s favour, and an extensive Memorial analysis in 4 parts was carried out. This pointed to major factual mistakes and to the fact that some of the lurid confessions were to heinous crimes which simply never happened.  The prosecution had left the confessions in the indictment, but not charged the men.  Memorial suggested that this was so that monstrous details of non-existent crimes would have an emotional impact on the jury which the defence would be powerless to fight.

The factual mistakes were enormously significant.  Of the 30 soldiers whom Russia claimed had been killed by Karpyuk and Klykh, 18 had died in another place altogether, and a further eleven were not killed by gunfire, as the prosecution claimed.   One man had died of gunfire, but not from the type of gun that the investigators claimed was used.

On these grounds and others, Memorial HRC in February 2016 declared both Klykh and Karpyuk political prisoners.  There seems to have been considerable pressure brought to bear on jury members who ignored all evidence that the men had never set foot in Chechnya, that their ‘confessions’ had been extracted through torture and hat the alleged crimes had not happened.

In May 2016, Karpyuk was sentenced to 22.5 years, Klykh to 20.  Serious grounds for concern about Klykh’s mental state have been ignored, and both men are now in maximum security prisons.

Both men were effectively abducted from within Russia’s borders.  Yatsenyuk faces no such danger, and reacted back in September 2015 with dismissive comments about the sanity of those presenting such delirious charges.  Since two men have now received huge sentences for this same nonsense, the cynical lies need to be fought, not merely dismissed.