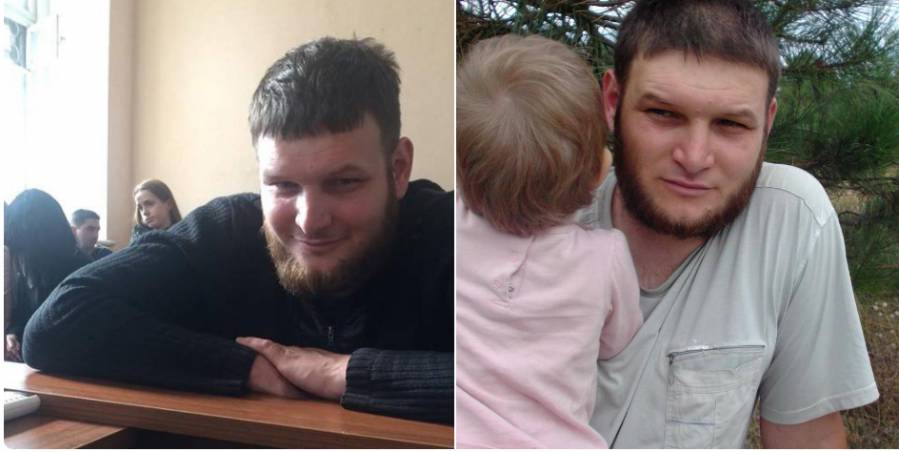 Remzi Bekirov has been jailed for three days in an escalating offensive against Crimean Tatars who actively report on repression in Russian-occupied Crimea.  It is doubtless intentional that the pretext should have been a social network post from long before Russia’s annexation of Crimea and on a VKontakte page that he had long deleted.

The 30-year-old father of three was called into the so-called Centre for Countering Extremism on Thursday morning, together with Osman Arifmemetov, purportedly to collect personal items removed when they were detained on Feb 21.  Both were among the ten Crimean Tatars who came out onto the street near the home of activist Marlen Mustafaev where a search was underway.  Mustafaev was then jailed for 11 days and all 10 men detained for their act of peaceful solidarity received 5-day sentences.

Inside the Centre, Arimimetov received his tablet back and left.  He soon realized that something was wrong and, indeed, Bekirov had been detained, and presented with a new administrative charge - ‘circulating extremist material’ under Article 20.29 of the Code of Administrative Offences.  The supposed extremist content was a video clip about the ‘Prymorsky Partisans’, a vigilante group that targeted police officers whom they accused of brutality and corruption.  This was a very old post and Bekirov says he has no idea how the deleted VKontakte page came to be reinstated.

Arifmemetov, together with Riza Izetov and Article 20 journalist Taras Ibragimov arrived at the Centre to drop off food and drink for Bekirov.  Izetov later explained that they were then approached by three of the officers who demanded to see their papers and themselves detained.  Izetov says that the officers never gave any sensible reason for detaining them and taking them to a mould-filled and foul basement.

They were at least released, possibly because Arifmemetov was in constant telephone contact with a lawyer.  He was released first, the other two a little later.

Bekirov remained in the Centre, and was then taken to the Russian-controlled Simferopol District Court.  Typically, all places in the courtroom had been filled – obviously by court staff, so that people coming to show support for Bekirov could be kept out.  Neither Centre officer Ruslan Shambazov, nor the ‘judge’ were at all concerned about the age of the post, nor the fact that it had been deleted, and Bekirov was jailed for 3 days.

Bekirov managed to speak with a Qiriminfo correspondent during a break in proceedings.  He said that he considers the ruling politically motivated and aimed at intimidating other civic activists like him.  “We are trying to demonstrate the rights infringements in Crimea, including against Crimean Tatars, the lawlessness from the security service.  This is a message to the entire people that they should be frightened, not come out, not be active.”

Bekirov is a historian by education, and clearly a devout Muslim.  As well as ensuring coverage of cases involving the illegal detention of fellow Crimean Muslims on spurious charges of involvement in Hizb ut-Tahrir, an organization which is legal in Ukraine, Bekirov also actively helps the families of those detained.  It was at his initiative that many Crimean Tatars spent last weekend helping the wife of imprisoned Crimean Muslim Teymur Abdullaev with some repairs to the family’s home.

Five Crimean Tatars have thus been detained over the last two days, with Belyal Adilov now facing criminal charges for a supposed “threat against representatives of the authorities” and Remzi Bekirov jailed on an absurd administrative charge.  There has also been suggestion of possible charges against Emil Kurbedinov, the Crimean Tatar lawyer and rights defender who is representing many victims of repression.

Adilov was effectively abducted on 29 March from outside the court in Simferopol where the latest detention extension hearing was due to take place in the case of 5 men, two of them Adilov’s neighbours, charged with involvement in Hizb ut-Tahrir.

The men in masks and camouflage gear did not identify themselves, and it was only later that Adilov was able to phone his family and say that he was being held at the Investigative Committee.

Lawyer Edem Semedlyaev reached him at around 2 p.m.  At a certain point they asked for time to say their prayers and were categorically refused by the masked FSB officers.

In protest, Adilov said that he would not speak to the officers or sign anything, after which they caved in.

The charges against him are chillingly ominous.  He is accused, under Article 313 of the criminal code of “using force or threats against a representative of the authorities”.  This seemingly is how the FSB have decided to treat a verbal exchange between an OMON riot police officer and Adilov on Oct 12, during the arrest of his neighbours.

Adilov now remains in custody with a court hearing on detention due on March 31. The father of six could face a prison sentence of up to 5 years.

Update Adilov was rather unexpectedly released on an undertaking not to leave on Friday, however the criminal charges have not been withdrawn.