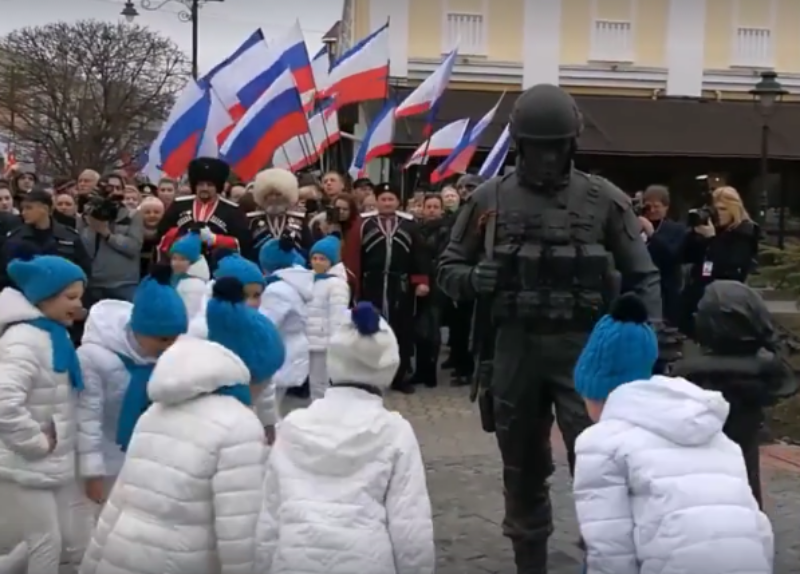 Children waving machine guns or ‘thanking’ a monument to the Russian soldiers who invaded Crimea in 2014 are more than tasteless Russian propaganda performances for anniversaries.  Human rights activists have long warned that Russia’s occupation of Crimea has brought not only political repression, but also war propaganda and the deliberate militarization of public awareness. Children are particularly targeted in the campaign of disinformation, stirring up of enmity towards Ukraine and the glorification of war in Crimean schools.   There has been mounting focus on so-called ‘military – patriotic’ education in Russian since Vladimir Putin came to power, with Russia now aggressively and illegally trying to foist this on occupied Crimea.

Iryna Sedova, from the Crimean Human Rights Group, points out that raising children to have a positive attitude to both the military and to paramilitary formations, encouraging them to military service in the army of an occupying state, and generally inculcating a positive image of war are all infringements of the fundamental rights set out, for example, in Article 29 of the Convention on the Rights of the Child, to which Russia is a party.

The so-called ‘military-patriotic’ education involves wearing military uniform and learning how to use firearms.  The idea is inculcated of victory in war with the help of armed conflict.  Sedova stresses that all of this is aimed at trying to legitimize Russia’s occupation of Crimea and the actions of the armed paramilitaries who worked together with Russian soldiers to secure control of the peninsula.  It is those so-called ‘self-defence’ paramilitaries who were involved in the abduction and horrific murder of Reshat Ametov and torture of other pro-Ukrainian activists.  It is they who are believed to have been behind many of the disappearances since Russia’s invasion.

Such propaganda, as well as the introduction of conscription to the Russian army from Crimea, are aimed at generally strengthening Russia’s grip on the peninsula and bringing up children to see themselves as part of Russia.

Russia began implementing its Strategy on education and upbringing of children back in 2014.  This calls one of the tasks in education being “the formation in children of patriotism, a feeling of pride for their Motherland, willingness to defend the interests of the Fatherland, responsibility for the future of Russia based on the development of programs of patriotic upbringing, including military-patriotic upbringing”.

Public sector institutions, civic organizations and the Orthodox Church under the Moscow Patriarchate are also involved in the process.  As part of ‘Lessons of courage and patriotism based on the example of the sacred warrior Feodor Ushakov, a trip was organized for students from one Simferopol school to a Russian military unit.

In June 2016, a campaign to recruit people as contract soldiers had an image of a soldier with the words ‘Politeness is your choice’.  After it became impossible to maintain the lie that the Russian soldiers without insignia who invaded Crimea were not theirs, Russia began assiduously pushing the term ‘polite people’ to supposedly describe the soldiers.  It was a statue to one such soldier that children danced up to saying ‘thank you’ during one of the choreographed performances on the third anniversary of annexation.

In Kerch, as part of this campaign, children were encouraged to play on tanks, etc. at an exhibition of military technology.  Other photos can be found here.

There are also camps and ‘military-sport’ games for learning the state-approved version of ‘patriotic awareness’ while training with Kalashnikov rifles.

These are in no way private initiatives.  In June 2015, Russia’s Minister of Culture Vladimir Medinsky announced that the semi-official Russian Military History Society which he heads would be organizing a ‘patriotic camp’ for 5 thousand children in Crimea, entitled “I am a Citizen and Defender of a Great Country”.  The young people, aged from 12 to 18, would study the history of Russian statehood and the Russian Armed Forces; military ethics, and also undergo physical and tactical training, together with training in using firearms and marching in formation, etc.  Medinsky claimed that this has a positive impact on kids who want to be “like the military heroes of our Fatherland”.

Olha Skrypnyk, Head of the Crimean Human Rights Group, told Krym.realii, that Russia  is violating international humanitarian law through its constant efforts to push service in the Russian armed services. The attempts to glorify the Russian army are, she stresses, turning facts on their heads.  The most terrifying part of it, she believes, is the way Ukraine is being presented to Crimeans through a prism of propaganda.  Children are especially targeted for what she views as a cult of hatred to Ukraine and Ukrainians.  Children are easily influenced, and after a few years of such aggressive militarization, they will genuinely see Ukraine as something terrible, and believe the lies they’re told about a so-called ‘junta’ in Kyiv.   The militarization and cult of violence easily also results in children viewing certain kinds of crimes as somehow OK, because they’re  against ‘the enemy’.

Skrypnyk warns that the kind of propaganda being used is giving children the profoundly flawed idea that “war is a festival, it’s Victory over the enemy indicated by the Kremlin.”

While Russia has the money, she believes, it will keep channelling it into war and propaganda.  One method of preventing this is to highlight the dangers of such militarization and ensure that Russia is held to answer, including through sanctions that bite.