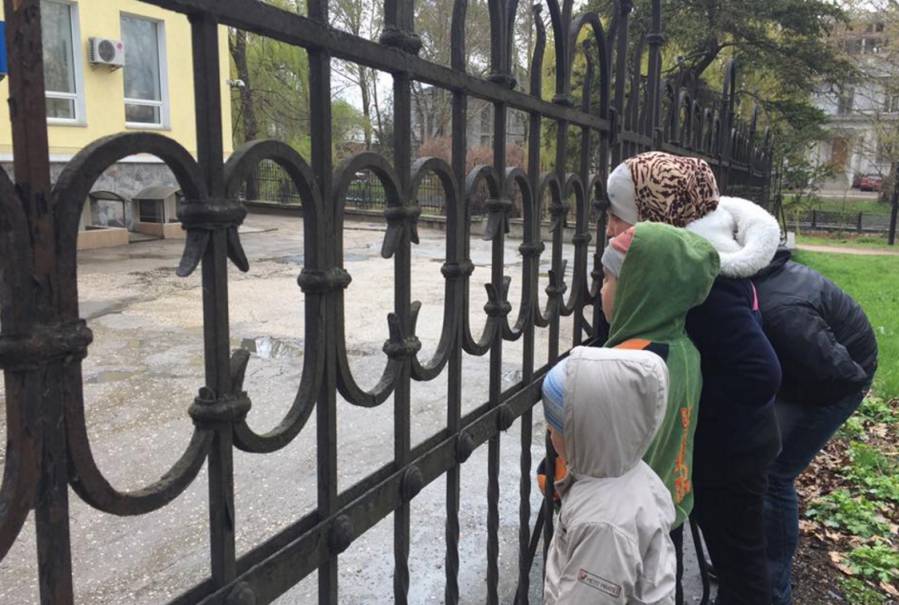 Courts in Russian-occupied Crimea have now begun banning relatives and friends from attending court hearings – the only chance many have of seeing the imprisoned men.  Most incredibly, the FSB has now told a court that the men should remain in custody as they are recognized internationally as political prisoners!

Courts in Russian-occupied Crimea have now twice refused to allow relatives and friends into court hearings on extending the effectively indefinite detention of men held prisoner on fundamentally flawed charges.  The move is at very least brutal, since these hearings are often the only opportunity for wives, parents, and sometimes children to see the men.  Questions must, however, also arise as to what the courts are trying to hide.  Some of the prisoners have spoken at previous hearings about both the political nature of the proceedings, and about the torture methods used against them.

At closed court hearings on the detention of 6 men from Yalta on April 6, and of 4 men from Bakhchysarai on April 9, all objections from the defence were rejected and the terms of detention extended.  As at previous – open – hearings, the prosecution could find no convincing reason for the men’s detention but this was ignored by the court.  Lawyer Emil Kurbedinov reports one extraordinary addition to the ‘arguments’ presented on April 9.   The FSB produced material demonstrating that the men are considered political prisoners by Ukraine and the international community.  You might have hoped that this could serve as grounds for reflection, but that was not to be.  The material was presented as ‘proof’ that the men should not be released, because they “will be helped to escape”, with this meekly accepted by the court.

Human rights defender Emir-Usein Kuku; Muslim Aliev; Enver Bekirov and Vadim Siruk were arrested on Feb 11, 2016, after armed and masked men burst into their homes and those of others, using gratuitous force and terrifying children who had been fast asleep.  On April 18, two very young men – Refat Alimov and Arsen Dzhepparov – were also arrested as part of this so-called Yalta ‘case’.

All men are charged with involvement in Hizb ut-Tahrir, a pan-Islamist organization which is legal in Ukraine.

Russia’s ‘Hizb ut-Tahrir case’ have been called a conveyor belt of repression, with the charges standard and convictions effectively guaranteed.  Russia has never provided any sensible reason for banning as ‘terrorist’ an organization which has never committed or called to acts violence and which is legal in most countries.  This is invariably ignored by investigators, prosecutors and judges, as is the lack of any proof against individuals accused of involvement in the organization.

That, at least, is the case in Russia.  In Russian-occupied Crimea, however, lawyers have demanded to see proof and have publicly spoken of the violations of their clients’ rights.  During the arrests above, and those near Simferopol in October 2016, friends and neighbours have come out onto the street, in peaceful solidarity with the men and protest.

This is clearly not to the Russian FSB’s liking and several activists have themselves been detained and either fined or jailed on overtly fabricated charges.  The aim is clearly to frighten them and others and deter them from showing solidarity.  Thus far, the methods have been unsuccessful.

In each of four ‘cases’, including the above, one person is designated the role of ‘organizer’, with this carrying a sentence of up to life imprisonment, while the other men are accused of taking part and also face huge sentences.

The first four men arrested: Ruslan Zeitullaev, Nuri Primov; Ferat Saifullaev and Rustem Vaitov from Sevastopol were convicted in September 2016.  The judge lacked the courage to acquit the men, but changed the charges against Zeitullaev from ‘organizer’ to ‘participant’ and handed down the lightest possible sentence in all cases.

This too was not part of the plan and Zeitullaev’s sentence was challenged and obediently revoked by the Russian Supreme Court.  A ‘retrial’ is now being played out, with the same flawed ‘evidence’, but the judges unfortunately likely to pass the sentence that the FSB demanded.