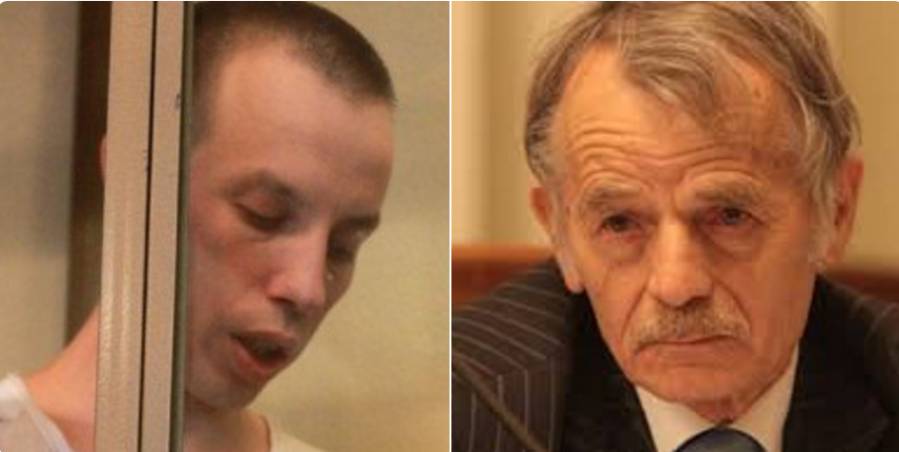 You cannot stir the conscience of those who have none.  Primarily for that reason, Mustafa Dzhemilev, veteran Crimean Tatar leader and former political prisoner, has called on Ruslan Zeytullaev to end his hunger strike.   The Crimean Tatar political prisoner has been without food now for 15 days, and after over 2 years of imprisonment in appalling conditions, there are real grounds for concern.

Dzhemilev points out that a hunger strike is mainly aimed at drawing attention to lawlessness, and here Zeytullaev has achieved something: his case has become known.  “However, this hunger strike is aimed at arousing conscience, and Russia, or at any rate, its leaders, have no conscience. You should therefore maintain the hunger strike to a certain point, but not exceed it”, Dzhemiliev says.

72-year-old Mustafa Dzhemiliev was on hunger strike many times during his 15 years in Soviet labour camps.  He once spent 303 days on hunger strike, with the prison doctors force-feeding him when his condition became totally critical.  In similar circumstances, he once recounted how it was Andrei Sakharov who persuaded him to end a hunger strike when his life was in danger.  Sakharov wrote the following words:

“End the persecution of my people”

As reported, 31-year-old Zeytullaev announced his hunger strike in court on April 4.  He spoke of the violations since Crimea had ended up de facto under Russian jurisdiction, including abductions, killings and illegal arrests and said that his action was aimed at restoring justice.  He put forward specific demands, namely that all criminal prosecutions of Crimean Tatars on so-called ‘extremism’ or ‘terrorism’ charges be dropped; that he be allowed to see the Ukrainian consul; and that the convictions of the other three men initially tried with him be quashed.  They are serving sentences, he stressed, based solely on their religion and nationality.  He pointed to the long list of international bodies who have condemned the persecution.

The four men were the first Crimean Muslims to be arrested in early 2015 and charged with involvement in Hizb ut-Tahrir.  This pan-Islamist organization is legal in Ukraine and most countries, and there is no evidence that its members have ever committed or advocated acts of terrorism anywhere in the world.  Russia declared Hizb ut-Tahrir a ‘terrorist’ organization in 2003, without explaining why and without telling the organization itself and human rights organizations about the judgement until it was too late to lodge an appeal.  Russia now regularly sentences Russian Muslims to huge sentences for supposed membership of it, and is bringing the same repressive tactics to occupied Crimea. The renowned Memorial Human Rights Centre considers all those convicted on such charges to be political prisoners, though normally waits until after the trial is over to issue a statement.

In the case of the four Crimean Tatars from Sevastopol, it made an exception for important reasons.  In declaring the men political prisoners in June 2016, it additionally stressed that Russia has no right to apply its legislation on territory it is illegally occupying, and Hizb ut-Tahrir is legal in Ukraine.

Zeytullaev who is married with three small children, is facing a ‘retrial’, after the FSB and prosecutor challenged the 7-year sentence passed by the first court.

There was no evidence against any of the men, and much of the so-called ‘trial’ revolved around alleged activities well before Russia’s invasion and annexation of Crimea.  It was also telling that a great deal of attention was given to the men’s opposition to annexation was also constantly raised as though pertinent.

The main ‘prosecution witness’ was – and remains - Alexander Kozhemyaka, a former Ukrainian security service officer who switched allegiance and now works for the FSB.  There is considerable evidence that he had a vested and corrupt interest in a land dispute which Zeytullaev and Saifullaev won in 2012.  Other prosecution witnesses essentially spoke in favour of the men in court and one said that he had signed his ‘testimony’ without reading it after being told he would also be arrested if he didn’t.

The trial was so gravely flawed that even the weathered judges of the Rostov Military Court balked at handing down the sentences demanded.  The court on September 7, 2016 rejected the more serious charges of ‘organizing’ a Hizb ut-Tahrir unit in Zeytullayev’s case, and convicted him and the others merely of ‘involvement’.  All four men should have been acquitted, but that never happens, so the judges’ unwillingness to pass a 17-year sentence for nothing had seemed promising.

The sentence in Zeytullaev’s case was challenged and on December 27, the Russian Supreme Court obeyed and revoked the sentence against Zeytullaev and sent the case back for ‘retrial’.

This judicial farce is now approaching an end, with no pretence made of a real trial. Typically, the ‘secret witness’ was not even brought to the court.  Despite strong objections from the defence, the minutes of his interrogation were simply read out.

The formal debate of the parties is due on April 21.  Zeytullaev’s lawyer Emil Kurbedinov warns that the new verdict could be passed shortly.  He has few illusions, and expects that the court this time will provide the long sentence required.

He is quite clear of the reasons and they are both lawless and menacing.  The FSB was placed in a difficult position by the first court’s glimmer of integrity.  These conveyor belt Hizb ut-Tahrir prosecutions follow a pattern and there needs to be a leader of each supposed ‘cell’.

For that reason, the retrial is of major importance not only for Ruslan Zeytullaev.  15 other men are in effectively indefinite detention in occupied Crimea, facing identically flawed charges.  Muslim Aliev, Enver Mamutov and Teymur Abdullaev have been designated ‘leaders’.

There is no reason, except that the FSB needs its story to look ‘right’.  That is enough for Russian prosecutors to demand and, probably, for courts to provide sentences of 15 years and more.

PLEASE HELP by bringing these cases to the attention of politicians and the media in your country!

There are (brief!) details below about all of the men facing these monstrous charges, and all current addresses and advice on writing to the four men from Sevastopol can be found here