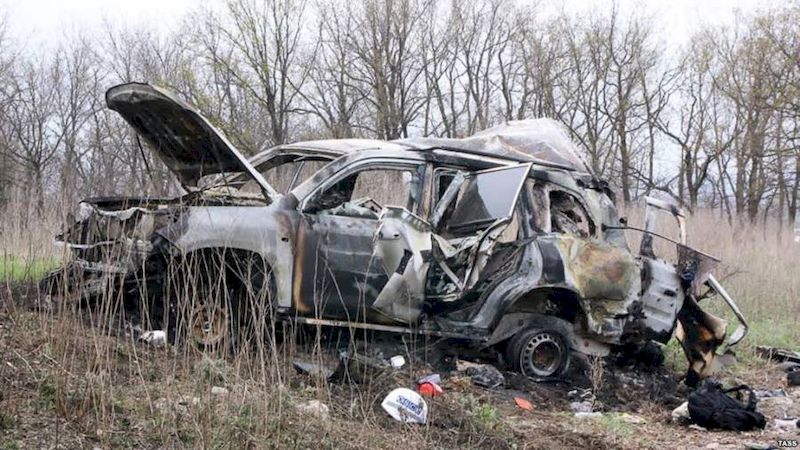 An OSCE Special Monitoring Mission patrol member was killed on Sunday and two other members injured after their vehicle hit a mine near Pryshyb, in militant-controlled territory of the Luhansk oblast.

The SMM report states that the SMM patrol, consisting of six members and two armoured vehicles was driving near “LPR”-controlled Pryshyb (34km north-west of Luhansk) on a secondary road previously used by the SMM. At 11:17, one of the SMM vehicles (second in line), with three members on board, was severely damaged as a result of an explosion, possibly after coming into contact with a mine.

Consequently, a male paramedic died and the two other patrol members (one male and one female) were taken to Luhansk Regional Hospital for further medical examination. The other three SMM members from the unaffected vehicle were safely transported back to the SMM base in “LPR”-controlled Kadiivka (formerly Stakhanov, 50km west of Luhansk). No mine hazard signs were visible along the road.

RFERL reports that the US State has said it was shocked over the death of the US citizen serving as an international monitor, and called on Russia to use its influence to allow a full investigation.  The State Department said it was "shocked and deeply saddened" by the death of the American citizen "when his vehicle struck an explosive in separatist-controlled territory."

"This death underscores the increasingly dangerous conditions under which these courageous monitors work, including access restrictions, threats, and harassment," the statement said. "The United States urges Russia to use its influence with the separatists to allow the OSCE to conduct a full, transparent, and timely investigation."

An OSCE official told RFE/RL that the names of those involved would be released after their families had been notified.

It was the first reported death among OSCE staff members, who were first deployed to the region in 2014 to monitor the cease-fires between the Russia-backed separatists and Ukrainian government forces in a conflict that has killed at least 9,940 people.

Austrian Foreign Minister Sebastian Kurz, who holds the rotating chairmanship of the OSCE, called for an investigation into the incident and, in a tweet, said he had spoken to the mission’s ambassador, Ertugrul Apakan. "Need thorough investigation; those responsible will be held accountable," he said on Twitter.

German Chancellor Angela Merkel stated that her government expects "the parties to the conflict to immediately take all measures to ascertain how we reached this tragic point and who holds responsibility for it,"

She said it was time for all parties to honour a long-promised cease-fire, but noted that the Russia-backed rebels bore the greater responsibility to make sure that happened.

"Ukraine condemns all forms of constant resistance by the rebels to the OSCE SMM’s work," he added.

A statement issued by the Russia-backed militants in Luhansk on their website claimed that the OSCE team had veered off the main road and was traveling along an unsafe route.  That claim could not be confirmed.

The unarmed, civilian OSCE mission, with more than 700 international observers, has been monitoring the situation on the ground in Ukraine since 2014.  In March this year, the OSCE, whose 57 members include Ukraine, Russia and the USA, agreed to extend the mandate for a further year.