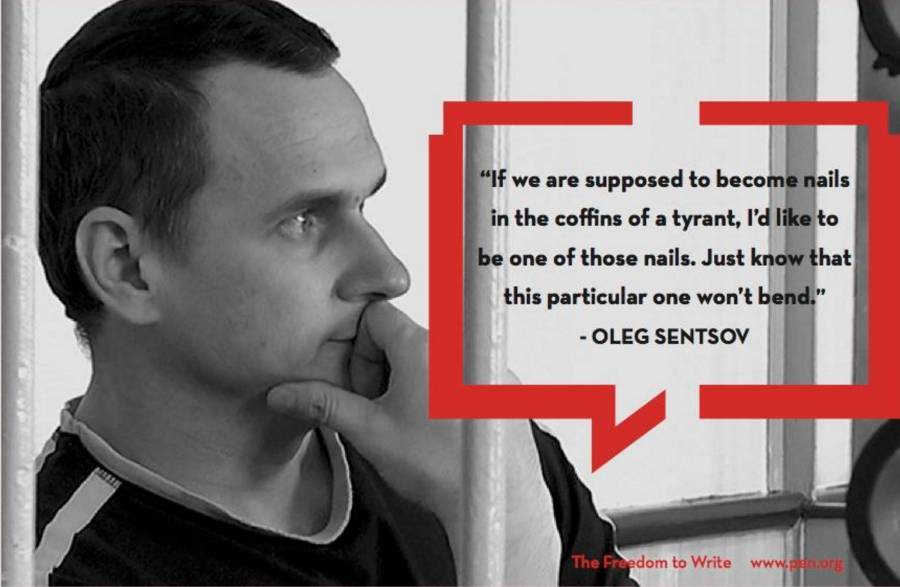 PEN America’s honouring of Ukrainian filmmaker and political prisoner Oleg Sentsov at its 2017 PEN Literary Gala would have been a very special event under any circumstances.  It was made particularly poignant by the letter from Oleg that was heard for the first time, together with a powerful address from his cousin Natalya Kaplan who accepted the award on his behalf.

The recognition from PEN America and calls for Oleg’s release from the many renowned guests at the Gala, including Meryl Streep, Salmon Rushdie and Stephen Sondheim, send an important message of support for the imprisoned artist and a clear statement to the Kremlin.  We hope, with PEN America’s vital help, to ensure that the calls for his release gain momentum over the following months.  They are urgently needed to help put pressure on the Kremlin to #FreeSentsov and all other Ukrainians held in Russian imprisonment, whether in occupied Crimea or, as in Oleg’s case, thousands of kilometres from family in Crimea.  In the letter, read out to the audience by actor Alan Cumming, Sentsov spoke for the first time about what his cousin says is his most vulnerable point – the fact that his 14-year-old daughter Alina and 12-year-old son Vlad are growing up without their father.

“It’s very hard to feel like a person when you’ve lost the most important thing to you. The people who are dear to you are not always those that you see every day. But children, even other people’s children, even those that you meet one time, will always be dear to you. And this is why it is so unbearable to hear children’s voices, which sometimes the wind carries in from beyond the [prison] fence.” *

Oleg Sentsov has been in Russian custody since May 2014, just months after Russia invaded and annexed Crimea.  He was honoured with the 2017 PEN / Barbey Freedom to Write Award “in recognition of his commitment to freedom of expression—particularly one’s right to dissent”.  It was specifically because of his peaceful opposition to Russian occupation and his refusal to stay silent and passive, that he was arrested, together with three other opponents of annexation – Oleksandr Kolchenko; Gennady Afanasyev; and Oleksiy Chirniy.

Sentsov faced vicious torture, with the Russian FSB ‘investigators’ openly threatening that if he didn’t ‘confess’ to insane charges that they would make him the ‘mastermind’ of their ‘terrorist plot’ and he would rot in prison.

He was sentenced after what one human rights defender called “an absolutely Stalinist trial” in August 2015 to 20 years’ harsh regime labour camp, with civic activist Oleksandr Kolchenko receiving a 10-year sentence.  In the powerful film produced by PEN America, one of the people speaking in his defence said that he had been imprisoned “for a crime he didn’t commit”.  He assuredly committed no crime, but the case was Kafkaesque in that there was no crime either, nothing at all to warrant the ‘terrorism’ charges.

In her speech to the audience, Natalya Kaplan spoke of the real reasons for her cousin’s arrest and imprisonment.  Oleg was first active in the Euromaidan movement, and then, after Russia’s invasion, provided food to besieged Ukrainian soldiers and eventually helped to evacuate them before an infinitely stronger Russian invader that Ukraine could not fight alone.

There is probably one other reason.  Both Oleg Sentsov and Oleksandr Kolchenko refused to be cowered, refused to provide the ‘confessions’ which Moscow wanted for its propaganda war against Ukraine.  During every detention hearing, and then later throughout the trial, Sentsov was biting in his criticism of the regime that was seeking to crush him.

He has written since about his readiness to be “a nail in the Tyrant’s coffin” and says that they should understand that his will be a nail that does not bend.

This comes with a price, and it is a terrible one, both for him and for his children.  In his letter he says that his mother had once tried to stop him from going to Maidan, saying that he mustn’t because he has two children.  He responded then that it was precisely because of his children that he had to go – he did not want them living in a country of slaves.

More than a year later, as a grotesque ‘trial’ came to its predetermined end, Sentsov told the court that cowardice is indeed the greatest sin, and that he hoped that Russians would learn not to be afraid.

Sentsov has stressed that he does not want to be the only prisoner to be campaigned for and this has been the message too from his cousin, speaking on his behalf.  Russia is using Ukrainian political prisoners as hostages and as tools for its hybrid warfare against Ukraine, and pressure is needed to ensure that all those taking part in the repression will be held to account. 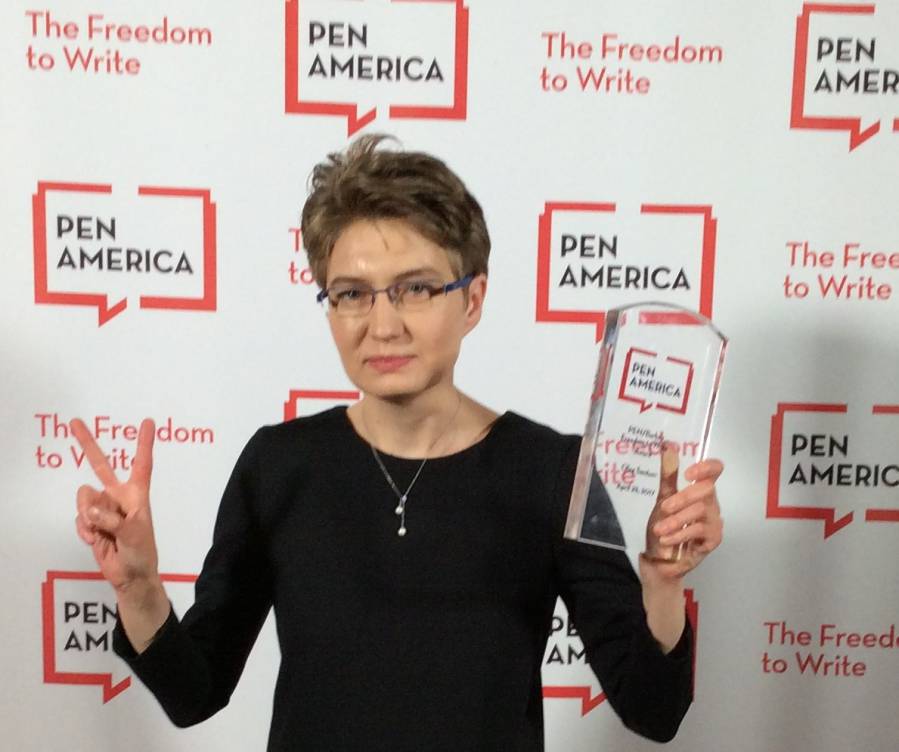 There need to be effective sanctions against the FSB leadership, the judges, prosecutors and investigators, who have all taken part in these monstrous travesties.  This is one of the messages Natalya Kaplan, Ukrainian journalist and MP Mustafa Nayem and the author will be trying to convey during meetings in Washington this week.

Russia is in grave violation of international law through its annexation of Crimea.  It has since unleashed real political repression in occupied Crimea.  Oleg Sentsov was one of the first victims, but the persecution is mounting.

Voices demanding that Russia #FreeSentsov can help bring him home and show Russia that it cannot commit such human rights violations with impunity.

Heartfelt thanks to PEN America and the Barbey family for their vital support!

Please see brief details about the men’s arrests and ‘trial’ at the bottom of the page.  First, however, in full, the letter as translated by PEN America.

Letter to PEN America from Oleg Sentsov in prion

Prison is the meat grinder of human destinies, having fallen into which you stop believing in justice, but don’t stop fighting for it. Here everything is different, here you try to live and survive, although you feel that your real life has been left somewhere, there, beyond the fence. And that the real you has also been left at liberty, and someone else was put in jail. That all of this is temporary, that soon everything will be resolved and change. But nothing is ever resolved, nothing changes.

Finding yourself in prison, you learn to live on hope, even when there is none. But there is time to think. Long, and about many things. About how you lived and what’s left after you, and if it still remains. You begin to look at yourself as though from the other side, at the one who stayed there, in freedom. The you of today looks back at the you of yesterday, more sober, more shrewd, and in some ways even more cruel. The portrait from the outside does not seem so attractive from the inside. How could anyone want to communicate with such a person? You want to become better than him.

And all that is superfluous, exaggerated, and superficial disappears. And the main thing begins to come through, that which is really worth living for. About which you can only learn here, or at war. Understanding that those close to you, the time that you spent with them, and the warmth that they gave you—this is the most important thing in life. Only this remains, all else disappears and is forgotten. You don’t yearn for anything as much as you yearn for this. Earlier it seemed unimportant and natural, like air, which you don’t notice until it is taken away.

One day outside a young girl gave me a postage stamp and said that it would bring happiness. I put the gift in the pocket of my coat and carried it with me for a long time. And then happiness got lost somewhere. It’s very hard to feel like a person when you’ve lost the most important thing to you. The people who are dear to you are not always those that you see every day. But children, even other people’s children, even those that you meet one time, will always be dear to you. And this is why it is so unbearable to hear children’s voices, which sometimes the wind carries in from beyond the fence.

Children are probably the most valuable thing that will remain after us. We will live on in them even after our death. Therefore we must not spoil their lives by educating them; we should educate ourselves, and simply love our children. And if at all possible, teach them these two truly necessary things: to read books and to speak the truth.

The last time I went to the Maidan, where people had already begun perishing, my mother said, “Why are you going there? You have two children!” I answered that it was precisely because of that that I was going there—I don’t want them to live in a country of slaves. We won then, but it proved not to be the end. And the struggle continues, but now without me. I’m in prison and like any prisoner it is very difficult for me to answer a simple childish question: “Daddy, when are you coming home?”

Oleg Sentsov, Oleksandr Kolchenko, Gennady Afanasyev and Oleksiy Chirniy were arrested in May 2014.  They were all held incommunicado, without access to lawyers, for around 3 weeks before being shown on Russian television and declared ‘terrorists’ on May 30.

From the moment Sentsov and Kolchenko were allowed to see proper lawyers, they told the same story, that they had been subjected to torture and pressure to ‘confess’.  Both men withstood the pressure and have always denied all charges.

On July 31, 2015, at the trial of Sentsov and Kolchenko, Afanasyev unexpectedly retracted all testimony, stating then and later that it had been tortured out of him.

Sentsov was sentenced to 20 years’ maximum security prison and Kolchenko to 10.  Both men are, in breach of Russian law, being held thousands of kilometres from their home and families.  Russia is also trying to claim that the men ‘automatically’ became Russian citizens, a claim which both the men themselves and the international community have condemned as a further breach of their rights. 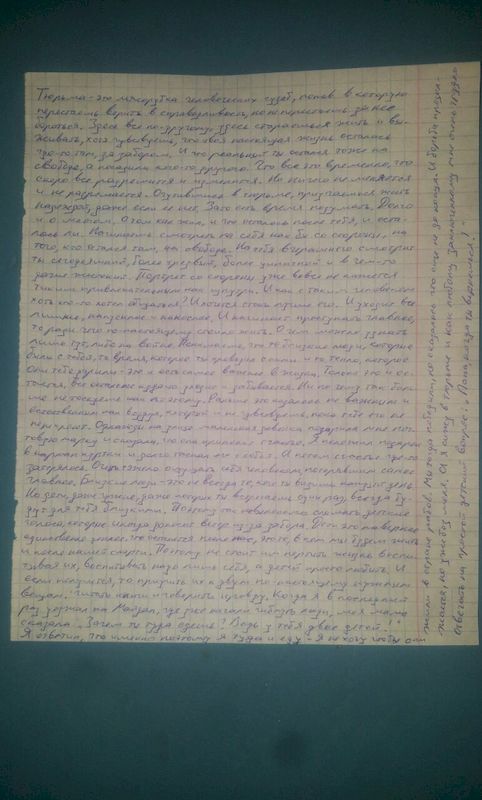