Suspected Maidan Killer & Three Other Ex-Berkut Officers Flee to RussiaHalf the Berkut officers deployed against EuroMaidan activists remain police officersYanukovych ‘doesn’t remember’ the bloodiest day of Maidan killingsPolitical PR & sabotage instead of real investigation on eve of 2nd Maidan anniversaryUkraine’s only trial over Maidan killings under threatPolice & judges accused of impeding prosecution of crimes against Euromaidan activistsAnother person charged with Euromaidan crimes allowed to escape?Ex-Security Service chief in custody over Euromaidan killingsSo who doesn’t want justice for Euromaidan victims?High-ranking Berkut officer charged over Euromaidan killingsEuromaidan: A Year of Impunity and what went wrongEx-Berkut officer on trial over AutoMaidan ambushEx-Berkut officers arrested on suspicion of involvement in Maidan killingsWhere are 13 mysterious Berkut sniper suspects?Who (hasn’t) answered for crimes against Maidan?Maidan killings suspect missing after being released from custodyTwelve detained on suspicion of involvement in the gunning down of Maidan protesters (updated)Blood and Berkut Sniper Bullets on the President’s HandsMustafa Dzhemiliev on Maidan: I’m proud of you, dear fellow UkrainiansBerkut snipers aimed at protesters
• Topics / Law enforcement agencies
• Topics / Human Rights Violations associated with EuroMaidan 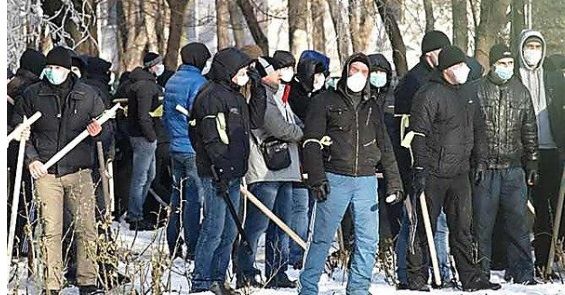 Anger is mounting as men accused of grave crimes against Maidan activists are freed despite clear grounds for believing that they could abscond. Two weeks after 4 suspects, one accused of murder, fled to Russia, another person has been released despite objections from the prosecutor.  Euromaidan SOS has spoken of a coordinated system for escaping justice and believes that it could not exist without the direct connivance of those in power.

Investigators have long complained of court sabotage, and this is clearly seen also in the latest attempts to ensure that the detention of Rostislav Zavorotniy was not extended.  Zavorotniy is accused of having taken 156 short-barrel Kalashnikov automatic rifles and 45 thousand pieces of ammunition from the police stocks and handed them to titushki, the paid thugs widely used by the Viktor Yanukovych regime against protesters.  This, he is believed to have carried out, during the night from 20-21 February 2014, with the weapons planned to violently put an end to Euromaidan.  The decision was taken on February 20, but later overtaken by events and developments, so the weapons were never used as planned.

This cannot change the fact that Zavorotniy was providing weapon to be used by criminal thugs against mainly peaceful protesters.  He is charged under Articles 262 and 263 (appropriately and illegal use of weapons) and Article 365 (exceeding official powers, as an acting police officer.

Zavorotniy was being held in a SIZO, or pre-trial detention centre, however the detention period was coming to an end and needed to be renewed.  For three days, the court was unable to begin the detention hearing.  The delay tactics – demands for the withdrawal of first one judge, then another, can be blamed on the defendant’s lawyers, however certain actions by the court and the final decision that the ‘working day’ had ended and that they were going home are clear signs that the judges were also helping to ensure that Zavorotniy was released during the early hours of April 28.

There are countless examples, where court hearings have been held in the evening or even during the night, and there is quite simply no definition of ‘working hours’ in Ukraine’s Criminal Procedure Code.  According to Oleksiy Donsky from the Special Investigations Department which wanted Zavorotniy to remain in custody, the court had been obliged to continue hearing the case, regardless of the hour.

Due to the long holiday weekend, the earliest time for a new court hearing is Wednesday, May 3.  It remains to be seen whether Zavorotniy turns up.

There are strong grounds for anger over such sabotage. Vitaly Honcharenko, a former Berkut officer suspected of direct involvement in the killing of Maidan activists was released from custody on April 6, 2017.  7 days later, on April 13, he and three other Kharkiv Berkut colleagues, two of whom had been under house arrest until April 13, crossed, unimpeded, into Russia.

The four men – Honcharenko, Oleksandr Kostyuk; Vladislav Masteha and Artem Voilokov – even produced a video, claiming that they had been carrying out their ‘constitutional duty’ during Euromaidan, “countering radicals and protecting the life of law-abiding citizens”.

This was not the first dubious court ruling releasing a key suspect, and at least one other such case had led to Dmytry Sadovnyk, the Berkut commander whose unit is believed to have been involved in the killing of 39 Maidan activists, also absconding.  He had been remanded in custody after his arrest in April 2014, but on Sept.19 that year was released by Judge Svetlana Volkova from the Pechersky District Court.  By Oct 1 it became clear that Sadovnyk had fled.  There were angry statements then, promising an investigation into Volkova’s actions.  None was ever carried out, and Serhiy Horbatyuk, Head of the Special Investigations Department,  has repeatedly complained of ongoing attempts by the courts to sabotage prosecutions of suspects in Maidan cases.

As mentioned, Euromaidan SOS now believes that all of the sabotage is deliberate.  It has demanded that the President’s Administration, the leadership of the Prosecutor General’s Office, the Interior Ministry; the Council of Judges and High Council of Justice provide a proper explanation.  The civic activists are not alone in wanting to know whether anything is finally going to be done to put an end to the deliberate attempts to stall prosecutions and allow key suspects to escape justice.