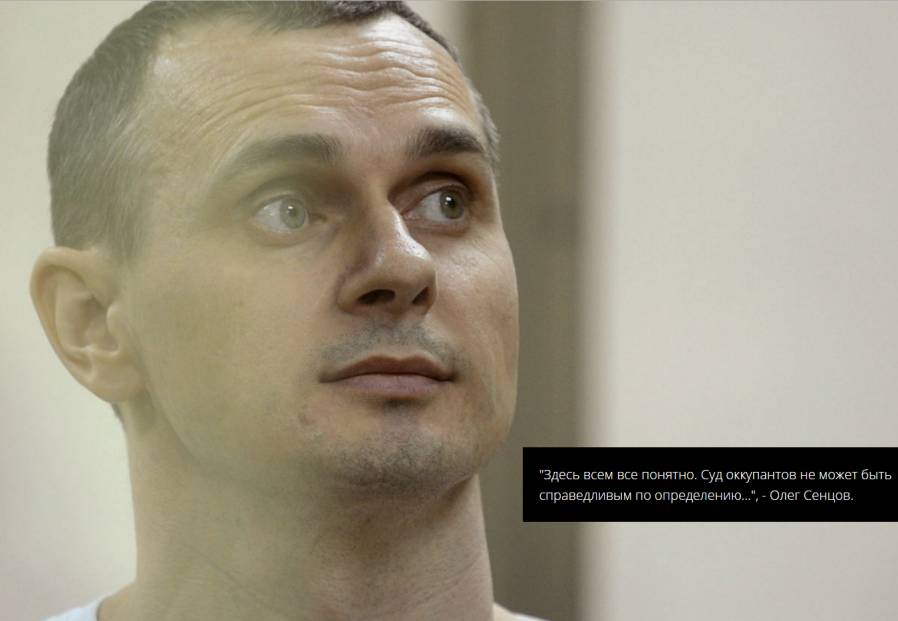 It is exactly three years since Oleg Sentsov, Ukrainian filmmaker and single father, was arrested in Simferopol, shortly after Russia invaded and annexed Crimea.  His trial and 20-year-sentence have been condemned by the entire international community, yet Russian President Vladimir Putin keeps repeating the same narrative, that Sentsov was tried and convicted of ‘terrorism’.  It is the magic word that Moscow has used to impose a sentence far longer than those in Soviet times passed against dissidents.  Terrorism, however, has a clear meaning, and Putin should be challenged to justify the claim or #FreeSentsov.

Where is the terrorism?

The other men had all taken part in one or two Molotov cocktail attacks during the night on the empty offices of two pro-Russian political organizations which had played a major role in Russia’s invasion.  Chirniy also had plans to blow up a statue of Vladimir Lenin.

These are certainly treated as offences in Russia, but are punished as vandalism or hooliganism, with the person getting a suspended sentence.

In just over three years under Russian occupation, there has not been a single terrorist attack in Crimea, yet Russia has either convicted or is holding 23 men in indefinite detention on ‘terrorism’ charges.  Fictitious ‘terrorist plots’ and supposed enemies are used to try to justify the armed invasion of Ukrainian Crimea. Moscow had, after all, claimed that its intervention was needed to ‘protect’ Russians and Russian-speakers.

Virtually everything about this case is reminiscent of the worst repressive Soviet methods, and it is no accident that the trial of Sentsov and Kolchenko was called ‘absolutely Stalinist’.

The FSB statement was accompanied by videos of ‘confessions’ by Afanasyev and Chirniy.  The two men were tried separately and received the minimum 7-year sentences.

Sentsov and Kolchenko continued to reject all the charges and Sentsov gave details of the torture applied to force him to ‘confess’.  He was openly warned that if he didn’t give the testimony demanded, he would get 20 years and rot in a Russian prison.

Since the only ‘evidence’ came from confessions, it is of critical importance that Chirniy refused to testify in court, and then Afanasyev took the stand.  He retracted all testimony as having been extracted through torture, and said that every word he had said about Sentsov had been false.  He was shortly afterwards also recognized by Memorial as a political prisoner.

Both men are being held in maximum security prisoners thousands of kilometres from their homes.

Putin is hoping that the international community will gradually forget about the men, and that Russians have been so duped by the state-controlled media that they will believe that the men are imprisoned for ‘terrorism’.

Not a chance, and it is important that he understands this now. He and all those judges, prosecutors and others implicated in the monstrous sentences knowingly passed on innocent men.

We are therefore seeking sanctions against all those who have taken part in what has rightly been termed ’ideologically motivated state terror’.   With Russia’s repressive measures against Ukrainians, especially in occupied Crimea, on the increase, it is important to send a clear message that there can be no impunity for those who obey criminal orders.

Please help #FreeSentsov and other Ukrainian political prisoners by asking politicians and journalists in your country to support targeted sanctions and to demand answers from Moscow.  Why, 150 years after Russia abolished serfdom, is it treating Ukrainians as serfs to be seized together with its Crimean land-grab?  How, over a quarter of a century after the collapse of the Soviet Union, has Russia descended to sentencing those who oppose its invasion for 20 years?

A model letter and some other ideas can be found here:

20 years for opposing Russian occupation of Crimea is worse than Soviet  –Help #FreeSentsov!