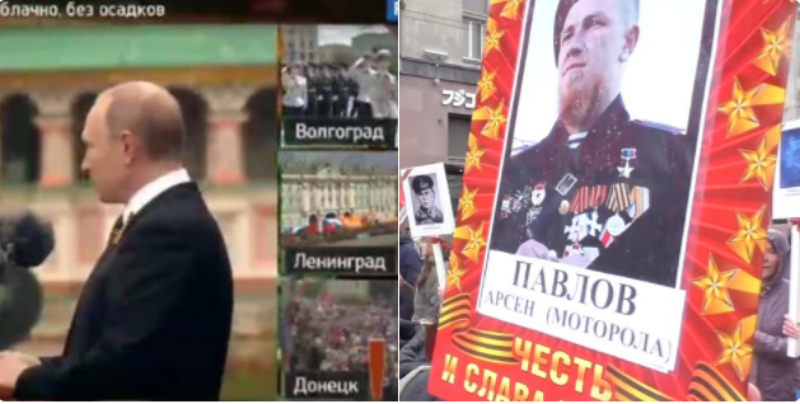 Victory Day in Moscow was always marked by pomp and military hardware, yet throughout Russia, as in Ukraine, it was for many a day of remembrance on which elderly veterans were treated with genuine respect.  Three years after Russia invaded and annexed Crimea and began its undeclared war against Ukraine in Donbas, the very special atmosphere of that day has been irrevocably lost.  Instead Russian-state television added live coverage of the 'military parades' in militant-controlled Donbas, with images from Donetsk directly under photos of Russian cities known for bloody military victories. Photos were also seen on the Immortal Regiment march glorifying a Russian warlord and Ukrainian militant whom Ukraine wanted to see tried for war crimes.

There were scuffles in several Ukrainian cities, between Ukrainians taking part in Immortal Regiment marches and others opposing a tradition seen as Soviet and/or pro-Russian.  The situation is exacerbated by the contentious decommunization laws passed in 2015 which prohibits the public display of Soviet symbols that are for many Ukrainians associated with remembrance of the Second World War.  While there could easily have been deliberate provocation, there has always been division in Ukraine over historical interpretation of the War, and the role of the Soviet Army on the one hand, and UPA, or the Ukrainian Insurgent Army, on the other.

Both in Russian-occupied Crimea, and in the Kremlin-backed and largely controlled self-proclaimed ‘Donetsk and Luhansk people’s republics’, the scenes broadly imitated those in Russia. No pretence was made in the so-called ‘republics’ of hiding contemporary tanks and other military equipment that Russia tried to tell the International Court of Justice had been ‘found’ in Donbas mines.  It was disturbingly noticeable in the reports from, for example, the close-to-Kremlin Komsomolskaya Pravda that words like ‘self-proclaimed’ are now omitted in Russian reports about their proxy ‘republics’.

Nor did Russian state-controlled television try to conceal Russia’s direct involvement in the conflict in Donbas.  In showing Russian President Vladimir Putin on Red Square, TV Rossiya 24 saw fit to post images on the right from Volgograd (where the Battle of Stalingrad in early 1943 marked the turning point in the War); Leningrad, and Donetsk.  If this was merely because they were covering the military show of weapons in Donetsk, the next question must be why they were.

There were numerous flags of the so-called Donetsk and Luhansk ‘republics’ waved at the Immortal Regiment march.  The woman sporting a photo of Mykhailo Tolstykh, or Givi, asserted that there were two generations – those who died in ‘the Great Patriotic War’, and those whom she claims died fighting ‘fascists’ in Donbas.  Another person was carrying a photo of Russian mercenary warlord Arseny Pavlov, or ‘Motorola’.

The militants have tried to blame Ukraine for the violent deaths of Givi and Motorola, although their claims are viewed with scepticism by most observers.  Both men were heavily guarded, but were, more importantly, men whom Ukraine wanted to try for war crimes and question over Russia’s involvement in the conflict.

Givi, was killed on Feb 8, 2017, in the very centre of Donetsk.  Pavlov or ‘Motorola’ died in a bomb explosion in his seriously well-guarded apartment building in Donetsk on October 16, 2016.  He was suspected of killing Ukrainian Donetsk Airport defender Ihor Branovytsky in cold blood and had himself boasted of having shot 15 prisoners of war.   The same eye-witnesses to Motorola’s murder of Branovytsky have reported that Givi, together with two Chechens and a woman, took part in torturing Branovytsky and the other prisoners. Both men were believed to have been involved in many other war crimes.

Attempts to present the events in Donbas as a fight against ‘fascism’ are seriously lacking in credibility, not least in view of the far-right, often neo-Nazi views of very many of the pro-Russian and Russian fighters in eastern Ukraine.  Such confused distortion of the very real danger that our parents and grandparents fought against and Moscow’s military aggression in Donbas is already upsetting.  However, photos of war criminals on an Immortal Regiment march are a profound affront to all the Russian and Ukrainian soldiers who died defending their countries against Nazi Germany in World War II.