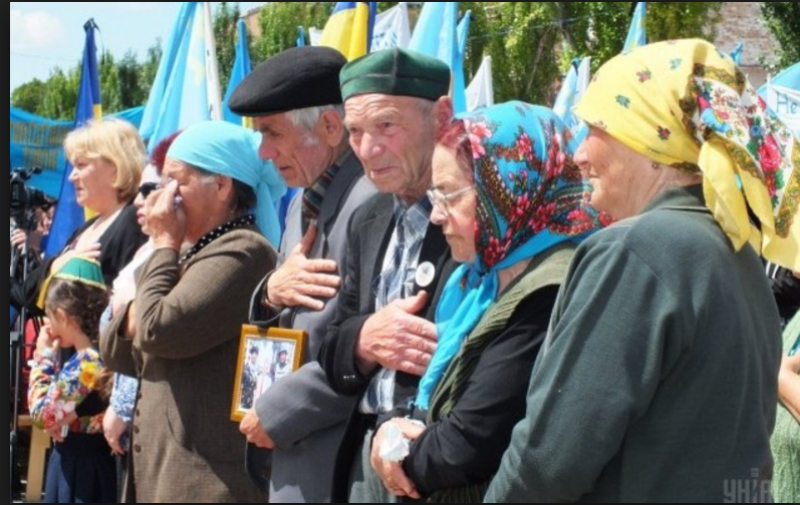 Crimean Tatars are for the fourth year facing bans and likely arrests on the 73rd anniversary of the Deportation in 1944 of the entire Crimean Tatar people from their homeland.  Ironically, even Turkey where there is formally a state of emergency, allowed the traditional remembrance gathering, yet Russia is continuing the repressive ban it imposed soon after invading and annexing Crimea in early 2014.

Refat Chubarov, Head of the Mejlis, or self-governing body, of the Crimean Tatar People, told those gathered in Ankara that many Crimean Tatars are once again forced to remember the tragedy of their people from exile.  He stressed that with every day the pressure on Crimean Tatars under Russian occupation increases, with ongoing arrests, searches, abductions and killings, as well as silencing of the media.

We must prevent a repetition of the 1944 Deportation, Chubarov said.  He noted that Ukraine’s parliament has now recognized the Deportation as an act of genocide against the Crimean Tatar people, and is now working on regulating the status of the Crimean Tatars as indigenous people of Crimea.  A constitutional commission was set up at the beginning of May to prepare amendments to Ukraine’s Constitution on the creation of a Crimean Tatar Autonomous Republic.

More than 180 thousand Crimean Tatars were forcibly deported on May 18, 1944 and in subsequent days.  Families were given less than an hour to prepare for the journey, with the NKVD operation carried out with enormous brutality.   Almost half died as a result of the appalling conditions.  According to Crimean Tatar leader Mustafa Dzhemiliev, “This crime was specifically aimed at wiping our people off the face of the earth.  After all in Crimea all cultural monuments of the Crimean Tatar People were destroyed, together with literature and even cemeteries, with the gravestones used for construction material”.

Refat Chubarov believes that the ban imposed by the Russian occupiers on on Crimean Tatars holding remembrance prayer gatherings, mass meetings and processions to honour the victims is aimed at eradicating their historical memory and justifying the crimes of Stalinism and the Soviet communist regime.  Russia is in this way seeking to crush the will of the Crimean Tatar people in fighting for their rights under Russian occupation of Crimea.   In the meantime, as last year, there will be a few local collaborators who will come up with a measure to suit the propaganda of Russian President Vladimir Putin’s regime.

At 12.00 a minute’s silence will be observed in mainland Ukraine in memory of the victims of the genocide of the Crimean Tatar people.

Since this is impossible in Crimea under Russian occupation, the Mejlis are asking each Crimean Tatar family to join in a common Dua or prayer.

Those living in individual houses should come to the gate from the street side, and join in prayer, while families living in apartment blocks should gather in the courtyard.

After the Dua, people should come to the memorial stones [Khatyra-tash] for prayers and to lay flowers.

All of this sounds entirely innocuous, but arrests are likely, especially now that Russia has banned the Mejlis, and is refusing to comply with the International Court of Justice’s order to stop its persecution.

During the hearings before the International Court of Justice in March, Russia’s lawyers claimed that there was absolutely no discrimination against Crimean Tatars or ethnic Ukrainians in occupied Crimea.

In fact, repressive measures began almost immediately.  Within two months of Russia’s invasion, Mustafa Dzhemiliev, who had been 6 months old at the time of the Deportation and spent 15 years in a Soviet labour camp for peacefully defending the rights of his people, had been banished from his homeland a second time.  Soon after this, in May 2014,  the occupation authorities banned any remembrance gatherings marking the 70th anniversary of the Deportation.  Around 50 thousand Crimean Tatars had traditionally gathered on the central square in Simferopol, and there were remembrance gatherings in other parts of the peninsula.  All of this was banned.   Refat Chubarov then asked:

Can you imagine – there are 22 regions with places in each where people come to honour the dead, places with memorial stones, and Crimean Tatars on May 17-18 don’t have the right to go there together to pay their respects, to honour those people! I don’t know what kind of person you have to be to not think of the consequences! I don’t know how to stop people so that they don’t go there. It’s like telling everybody “Don’t go to your holy places, don’t visit your dead” If they prohibited you, how would you act?  Force can stop everything, or not everything – it won’t stop the human spirit.”

People did, nonetheless, gather together to pray, and the occupation regime used military helicopters flown over the gatherings to drown out the prayers and as an act of intimidation.

In both 2015 and 2016, there were also heavy-handed measures against Crimean Tatars, even for driving with the Crimean Tatar flag on their car. Several were later prosecuted on trumped-up charges.

Please join all Crimean Tatars and other Ukrainians in a moment’s silence for the Victims of the Deportation on May 18, at 12.00 Crimean / Kyiv time.

It is well also to recall the words spoken by Yaakov Dov Bleich, Chief Rabbi of Ukraine, at the remembrance ceremony in Kyiv on May 18, 2016.  He addressed the world on behalf of Jews of Ukraine and other countries, recalling the terrible price once paid when humanity failed to act to in time to prevent the Holocaust.

We must not be silent until this issue is resolved. The resolution lies in the fact that people should live in their own land. Nobody has the right to drive people away.  Particularly when this is a repetition of what happened once. Why then is everybody blind and deaf, why do they hear nothing and see nothing? We are obliged to begin a campaign today so that it is heard through the whole world, so that what happened is never repeated.  So that we can know that the Crimean Tatars are able to live a free life with pride and spend their life in their own land, in Crimea which we will always consider to be Ukraine. Thank you. “   (See the video, or a fuller translation here.)