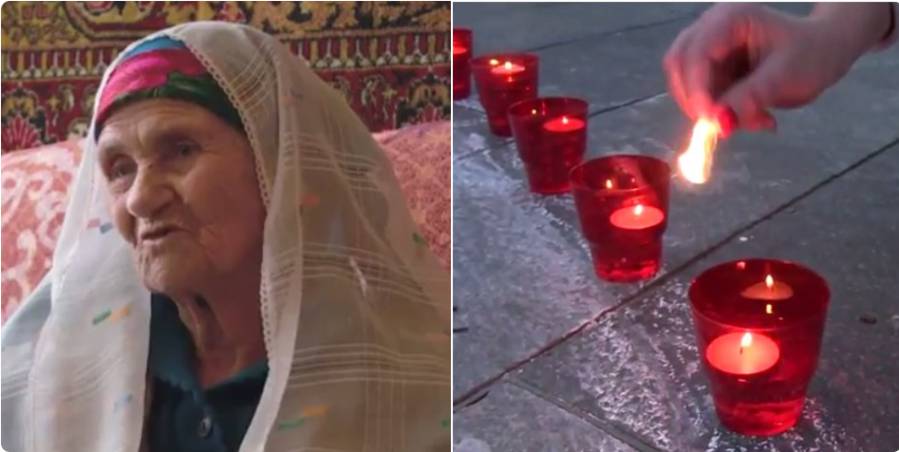 The words above were spoken by a great Ukrainian Petro Grigorenko when he addressed Crimean Tatars exiled in Moscow in 1968, almost 25 years after the Deportation.  Nearly 50 years later, Crimean Tatars are once again exiled or persecuted, and Grigorenko’s advice on demanding their rights and accepting no less, just as poignantly relevant.

In Crimea, the Russian occupiers have not confined themselves simply to banning remembrance gatherings.  On the eve of the 73rd anniversary of the Deportation on May 18, many Crimean Tatar Mejlis leaders and civic activists were summoned to the prosecutor’s office and handed ‘warnings’ of the inadmissibility of violating Russian legislation, including on ‘extremism’.  As Nariman Dzhelyal explains, their very presence outside on May 18 could be viewed as either ‘organization’ or ‘participation in mass gatherings’ and punished as such.

Dzhelyal almost noted earlier that there are reports from at least one school of plans to take children to specific events on that day.  While acknowledgement of the anniversary may be better than none, the efforts are probably aimed at preventing children joining their families in DUA, or collective prayers at midday. Certainly, last year parents were warned of trouble if their children did not attend classes on this most bitter and important of anniversaries for any Crimean Tatar.

In mainland Ukraine, the bells of all Ukrainian Orthodox Cathedrals under the Kyiv Patriarchate will ring for 5 minutes at 12.00 on May 18 in memory of the victims of the Deportation.  At exactly 12.00 Ukrainians will observe a minute’s silence.

Formal remembrance events began on the evening of May 17 with the youth initiative ‘Light a candle in your heart’, held for the tenth time this year – the fourth not in Simferopol after all remembrance gatherings were banned following Russia’s invasion and annexation.  Among those lighting candles was 82-year-old Adile Ametova, who said that she had seen all the sorrow and starvation and had come here to defend her people.  Their suffering would never be forgotten, she added.

The QHA Crimean News Agency has published an interview given by a survivor of the Deportation who has since passed away.  Like other exiled Crimean Tatars, 90-year-old Rabisherfe was afraid to give her last name out of fear that relatives in occupied Crimea could suffer.  Her harrowing words were all about the Deportation 73 years ago when she would have been no more than 16 or 17.

By 1944, the Nazis had been driven from Crimea.  She and her seven brothers and sisters were at home with only their mother, since their father had been taken into a forced labour army.  They were awoken at 6 a.m. by two Soviet soldiers who told them to hurry, that they were being deported.  Her mother, who was pregnant, and with a son who was ill, managed to grab only a small bag of nuts.  They were taken, without shoes and proper clothes to the station where they were beaten and pushed with rifles, and forced into goods trains.  They were locked in with only a tiny window.  At first there was nothing to eat, then later, when the train stopped, buckets of macaroni were brought, though nowhere to put them, nothing to eat them with.

They travelled like this, with virtually no food or drink, for almost a month before the train reached the Molotov oblast in the Urals.  There were two rooms in the house they were settled in – one for local Russians, and 13 Crimean Tatars in the other.

The food rations were 600 grams of bread for people able to work, 399 grams for their dependants.  They were driven out to chop wood and pushed all the time to work faster, though they began their day with watery nettle soup and nothing more.

In 1945, they learned that their father had been killed.  In the forced labour army, he had learned of the Deportation, and decided to try to find his wife and children in the Urals. He was caught and shot.

The Crimean Resource Centre has spoken to other victims of the Deportation.  The video can be heard with Ukrainian subtitles, or English.

Almost half of the nearly 200 thousand Crimean Tatars died during the journey to the far east of the Soviet Union, or in the first years.  The exile lasted for almost 50 years, with the majority able to return over after Ukraine’s Independence.  23 years later, Russia invaded and annexed Crimea.

Ukraine has (belatedly) recognized the Deportation as an act of genocide against the Crimean Tatar People.  It is hopefully about to pass vital legislation on regulating their rights as the main indigenous people of Crimea and establishing a Crimean Tatar national autonomy in Crimea.