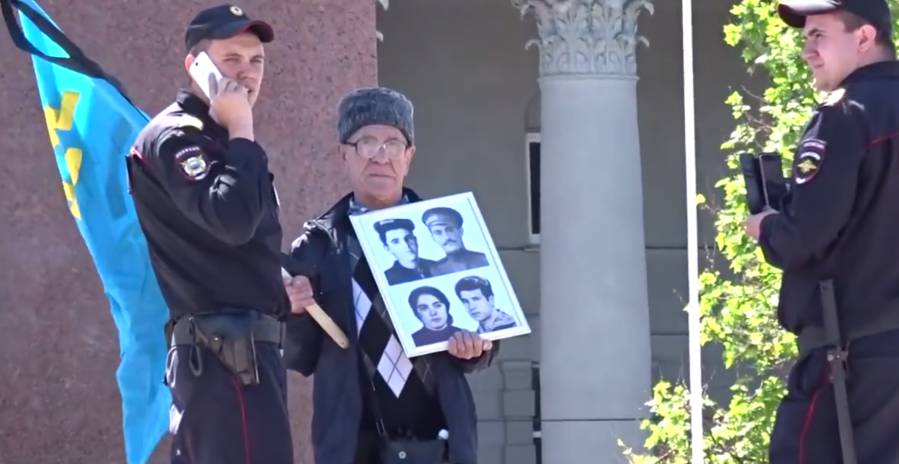 A Crimean court under Russian occupation has demanded better paperwork before prosecuting Crimean Tatars for driving with a Crimean Tatar flag on the anniversary of the 1944 Deportation.  The judge could have terminated proceedings, but did not, so fines at least are likely.  As one Ukrainian official has noted, this will provide further evidence for the UN International Court of Justice that Russia is discriminating against Crimean Tatars and ignoring the provisional measures imposed by the Court, including the order to stop the persecution of the Mejlis, or representative assembly of the Crimean Tatar People.

Five Crimean Tatars from Bakhchysarai were detained on May 18 for driving with Crimean Tatar flags on their cars.  According to lawyer Dzhemil Temishev, the police claim that this constituted ‘unlawful picketing or procession’ and infringed ‘the established order for holding mass events’.  There were reportedly only two cars with Crimean Tatar flags, and the three other drivers had protocols drawn up against them after they came to support the detained men.  It was all these protocols that the judge returned as having failed to provide even an implausible reason for the men’s detention.

It is quite clear from the experience of others that it was the Crimean Tatar flag that caused the most trouble. Osman Ismailov says that he was detained several times during the day.  He posted a video of one occasion when the enforcement officers tried to force him to remove the flag, claiming that even one Crimean Tatar flag on the car was prohibited.  Ismailov refused, and after a long argument, was released.

It should be noted that the same treatment has been meted out over the Ukrainian flag also, with activists facing fines or even periods of community labour merely for holding and / or photographing themselves with the flag.

The Crimean Human Rights Group reported flagrant violations of the right to peaceful assembly and freedom of expression on the anniversary.  These ranged from the bans and menacing ‘warnings’ of criminal liability issued to various Crimean Tatar activists to obstructions near memorial sites, the dispersal of people gathered there and detentions.

There were extremely cynical forms of obstruction.  In Bakhchysarai, for example, a police car sporting a St. George ribbon, closely associated for most Ukrainians with Russian aggression, was parked to prevent people coming to lay flowers and pray before a memorial to the Victims of the Deportation.

Surely the most shameful was the harassment and detention of Server Karametov.  The video here shows that this elderly man who suffers from Parkinson’s Disease was accosted by two police officers while standing alone, with photos of victims of the Deportation and a Crimean Tatar flag.  Even according to Russia’s repressive legislation, he was dealing nothing wrong.  He was, nonetheless, taken to a police station and held there for several hours, and not allowed to speak with a lawyer.

None of this was reported in the state-controlled Russian media, with many preferring to ignore the anniversary.  RIA Novosti gave a brief report, in which both the title and the text itself tried as much as possible to ignore mentioning who were the “victims of the deportation”, although 18 May is traditionally the day of remembrance of the Deportation of the Crimean Tatar People.

There was a formal wreath-laying and concert with a speech given by Sergei Aksyonov, installed as leader at gunpoint by the Russian soldiers who seized control on Feb 27, 2014. A Soviet-style speech was also given by the Mufti of Crimea, who has chosen to collaborate with the occupation regime.

Kremlin-loyal Crimean Tatars, it should be noted, were ‘allowed’ to have the Crimean Tatar flag, for which people were detained and now face administrative proceedings throughout Crimea.

Forcibly exiled Mejlis Head Refat Chubarov believes that “in his maniacal wish to purge Crimea of its indigenous people and repopulate it with Russians, Vladimir Putin is showing himself to be a real successor to Joseph Stalin who subjected the Crimean Tatar people to total deportation from their historical homeland.  Violent attacks and abductions of Crimean Tatars,  numerous searches; the ban on the Mejlis – these are a conscious policy of ethnocide of the Crimean Tatar people.”

After hearings in March into the case brought by Ukraine against Russia, the UN Court in the Hague ruled on April 19 that it had prima facie jurisdiction on both claims, and that in the case of discrimination in Russian-occupied Crimea, provisional measures were warranted.

The court cited numerous reports which led it to conclude that there have been limitations on the ability of the Crimean Tatars to choose their representative institutions, and restrictions in terms of the availability of Ukrainian-language education in Crimean schools.”

After asserting that it would abide by the Court’s judgement, Russia is now refusing to in any way comply with the Court’s order.