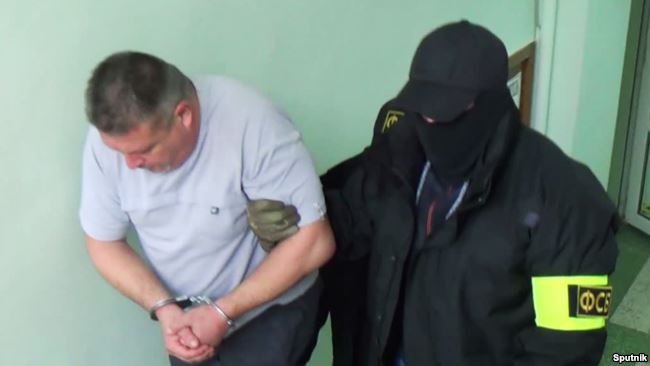 There are chilling indications that a well-known academic arrested in Russian-occupied Crimea on wildly implausible ‘diversion and sabotage’ charges and prevented from seeing an independent lawyer has been pressured into ‘admitting guilt’, enabling a court trial without any proof being required.

With Russia’s rosy promises about the future of Crimea under Russian occupation so glaringly at odds with reality, it’s FSB or security service is continuing to fake terrorist or saboteur plots.  These strengthen their position, while instilling terror, not least among those who know it’s all pretence. Unlike the stories, the people arrested and imprisoned are real, but that’s no problem when the prosecutor, courts and the media are all willing to play their roles.  And when the FSB has learned dangerous ways of preventing the fallout from cases too obviously fabricated.

The lack of any acts of terrorism or sabotage is unfortunately not a major factor.  Not if the FSB can avoid ‘confessions’ being retracted and conceal the torture used to extract them.  They failed three years ago, with Ukrainian filmmaker Oleg Sentsov and civic activist Oleksandr Kolchenko withstanding the torture, and Gennady Afanasyev later retracting his testimony in court.  The attempt at a remake in August 2016 has so far only caused headaches.  The torture marks on Yevhen Panov were clearly visible, making the fact that he was prevented from seeing a lawyer for two months of urgent concern.  He was finally allowed to see a lawyer after the European Court of Human Rights intervened, and since then both he and Andriy Zakhtei have consistently denied all charges, and given harrowing accounts of the torture they were subjected to. The FSB has totally changed the charges against Ridvan Suleymanov, with these now scarcely linked to his televised ‘confession’.

The FSB probably realized it had been a mistake to arrest men who had never set eyes on each other, as alleged conspirators.  They may well have regretted involving Yevhen Panov, whose family are safely in mainland Ukraine, making it more difficult to threaten retaliation against his family if he didn’t ‘cooperate’.

Both factors were ‘rectified] with the next arrests in November 2016.  On Nov 9, two internationally known academics and experts on the Black Sea Fleet - Dmytro Shtyblikov and Oleksiy Bessarabov - were arrested in Sevastopol together with a retired Ukrainian military officer Volodymyr Dudka.  The FSB did not give names, but claimed the men were “members of a sabotage – terrorist group of the Ukrainian Defence Ministry’s Central Intelligence Department” who were planning acts of sabotage on military and other infrastructure”.  Two much younger Crimeans  - Oleksiy Stohniy and Hlib Shabliy were arrested 10 days later, with this followed on Nov 24 by the arrest of Leonid Parkhomenko, a long-retired Black Sea Fleet captain.  Nothing has been heard since of Shabliy and Parkhomenko, however Stohniy’s wife Oksana has just come to Kyiv and totally overturned the information presented on Russian television.  Her husband was in fact seized at the Armyansk crossing into mainland Ukraine when trying to visit his daughter for her birthday.  Although her husband and Shabliy gave ‘confessions’ clearly linked with the first three men arrested, Stohniy is now in custody on an entirely separate charge of ‘preparing weapons’.  It is a totally incomprehensible charge given that searches were carried out of their home in his absence, as well as that of his parents and his work.  Nothing was found in his home, and only computers were removed from the other places searched.

The FSB report on Nov 10, 2016 after the arrest of Shtyblikov, Bessarabov and Dudka, asserted that “a powerful explosive device, weapons and ammunition, special communications devices and other material evidence” had been found.  Equally grandiose claims were made in May 2014 after the arrest of Sentsov and three other opponents of Russian annexation.  Most were never mentioned again.

An FSB operational video was circulated to the Russian media, with this showing Shtyblikov being roughly pinned down and handcuffed by FSB officers, and then in his home.  The camera focused on the Ukrainian trident, a Ukrainian flag on the wall, and Dmytro Yarosh’s ‘Right Sector’ business card.  Russian channels told their viewers that this was from the nationalist movement banned in Russia, but chose to remain silent about the ‘Yarosh business card’s’ extremely specific history.  The card had been first produced by Russia as ‘incriminating evidence’ in April 2014, after supposedly being pulled quite intact from a totally gutted out car.  The absurdity of the claim led to an Internet storm of hilariously implausible ‘findings’ of the card.

The ‘incriminating’ weapons shown on the video appear to have been airguns, from Shtyblikov’s sporting hobby.

The only ‘evidence’ is thus videos produced with total disregard for procedure and, most importantly, in the absence of a lawyer.

The question of adequate legal representation has now become particularly critical as it appears that Shtyblikov is ‘admitting guilt’, with this meaning a separate court hearing where proof is not required.  That in turn has implications for all three men, as Shtyblikov has been named the ‘leader’ of the so-called saboteur plot.

Shtyblikov has probably not seen an independent lawyer at all.  Back in November, he supposedly rejected the services of Alexander Popkov, who had contracted an agreement with the Shtyblikov family.  Popkov was not allowed to see Shtyblikov and hear this from him, which is a serious breach of procedural legislation.  It is therefore unclear whether the person Shtyblikov has agreed should represent him was freely chosen.

It would be dangerous to get into conflict with the only lawyer Shtyblikov has, however his family’s concern about the likely motives for his behaviour is easy to understand.  They know the charges to be absurd, which raises worrying questions about what is making him admit to something he didn’t do.  They believe it likely that he is being placed under great pressure, possibly with threats of some sort to his family.

The same attempts to prevent independent defence have been seen in the case of Panov and Zakhtei, as well as with other Ukrainians seized and tried since Russia’s annexation of Crimea. In all such cases, the people have since made it clear that the appointed lawyers were serving the prosecution, not them.

In this case, the situation is exacerbated by virtually total secrecy.  Dudka’s lawyer has said that she had to sign an undertaking not to divulge any information.  It is known that Bessarabov now has a lawyer, but whether by choice or FSB appointment is unclear.  Bessarabov’s family are largely avoiding talking with anybody, including the other men’s families, although the three men do know each other.  For a decade until February 2014, Shtyblikov and Bessarabov worked together in the Nomos Centre for furthering research into geopolitical issues and Euro-Atlantic cooperation in the Black Sea Region.  46-year-old Shtyblikov was the Director of International Programs while Bessarabov, now 40, was Deputy Editor of the journal ‘Black Sea Security’.  52-year-old Dudka was a former military sea captain, who retired for health reasons back in 2009.  He then worked for the Ukrainian Emergency Services, using his professional skills to locate unexploded mines from WWII, and continued the same work for the analogous Russian agency after annexation. His son and infant granddaughter are very much the focus of his life, and he remained in Sevastopol because of them.

The families of all the men are frightened to speak publicly, fearing the consequences to the men or to themselves.

It is imperative that Shtyblikov receives proper legal defence now and that the prosecution is forced in open trial to prove its claims against all three men.  This is very clearly what the FSB are trying to avoid with it worryingly easy to imagine the frightening pressure which the men are facing.