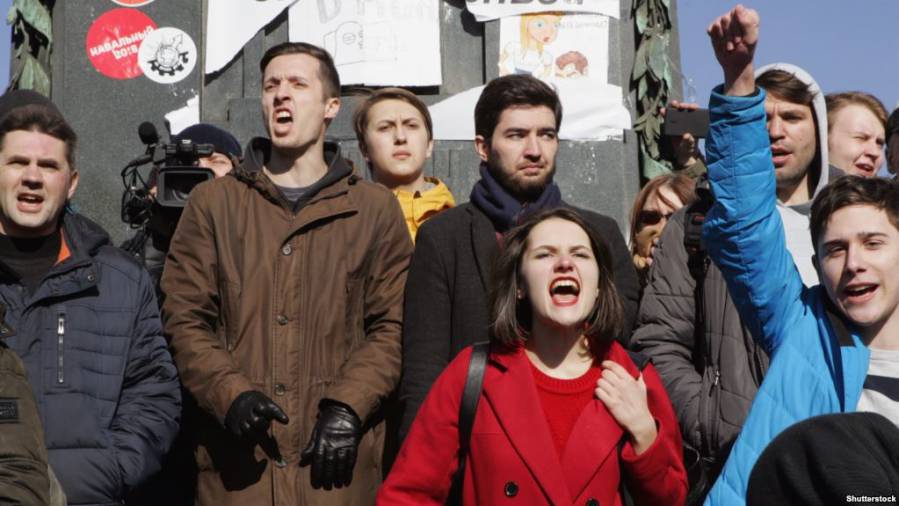 Young protesters shout slogans at Pushkin Square during a mass rally against corruption in the government of Russian President Vladimir Putin in Moscow on March 26.

Matvei had a hunch about what was coming when the 17-year-old and his peers were pulled out of class last week and led to their high school’s auditorium in the central Russian city of Tolyatti.

"We knew that they showed that film in other schools," the 11th-grader, who asked that only his first name be used, told RFE/RL in a telephone interview.

When it became clear his hunch was correct -- that they’d be shown a film likening Russia’s political opposition to fascists and terrorists -- he did what numerous other students in the country have done recently in similar circumstances. He recorded the event on his phone for posterity.

Matvei and his classmates later posted footage (below) of the screening and an ensuing argument with the school’s director online, the latest in a string of videosshowing students and teachers sparring over opposition politics and the wisdom of street protests.

The YouTube videos have seized national attention, highlighting a potential generational clash brewing over Russia’s political course under President Vladimir Putin -- and the often ham-handed efforts to foster youth fealty to the Kremlin.

WATCH: No To Extremism

."A protest attitude exists, and we must work with these protest kids," the state-run TASS news agency cited Education and Science Minister Olga Vasilyeva as telling a forum in Moscow on May 17.

She added that young people must not be allowed to be "drawn into antisocial actions" or "succumb to the pernicious, terrifying influence of radicalism."

Her comments came just weeks ahead of fresh nationwide protests next month being organized by Navalny, 40, an anticorruption crusader who has said he intends to run for president next year in an election widely expected to hand Putin, 64, another six-year term.

Navalny’s new-media acumen, irreverent and combative rhetorical style, and hard-hitting investigations of Russia’s ruling elite have earned him a loyal following among young people who show little interest in Kremlin dogma beamed out by state-controlled television.

Russian officials, state media, and Kremlin loyalists have sought to portray Navalny as a dangerous extremist, citing his earlier flirtations with right-wing groups, including his appearance at an ultranationalist rally in Moscow several years ago. ​

’Go Do Your Homework’

Ahead of the planned June 12 protests, a pair of slick but murkily financed music videos have appeared online urging young people to stay away from protests. One, released this week by the pop singer Alisa Voks, finishes with the lyric: "Stay out of politics, baby, go do your homework":

The other, an antiprotest rhyme by a rapper who goes by the stage name Ptakha, criticizes those who "rock the boat" and says it’s "odd to be a patriot, but for cash from Uncle Sam" -- a clear reference to claims by Navalny’s opponents that he and other Kremlin critics are U.S. puppets.

Navalny accused the Kremlin of using taxpayer money to finance the videos, which together have garnered nearly 3 million views. Both artists deny the allegation. Reports by two respected Russian news outlets, citing unidentified sources, suggested they were ordered either by current or former Russian officials.

The reports by Dozhd and Meduza both cited unidentified Kremlin officials as saying that Putin’s administration had nothing to do with the videos.

"Well, what can I say?" he wrote. "We’re down for the count. The Kremlin slayed us. Now young people won’t stand up to fight corruption and most certainly won’t go to the June 12 rallies in which 193 cities are participating."

Wary Of The Barricades

Valeria Kasamara, head of the Laboratory for Political Studies at Moscow’s Higher School of Economics, says she believes any systemic attempt by authorities to scare young people away from opposition politics might backfire.

"The result could stir up young people’s interest in protests even more," Kasamara told RFE/RL.

But Kasamara, co-author of a study in which more than 6,000 university students across Russia were surveyed on their political attitudes, is skeptical about young people’s desire and willingness to defend their political beliefs "at the barricades."

The study, released on May 16, showed that the issue driving Navalny’s protest movement -- corruption -- was seen by 66 percent of respondents as the No. 1 problem in Russia. 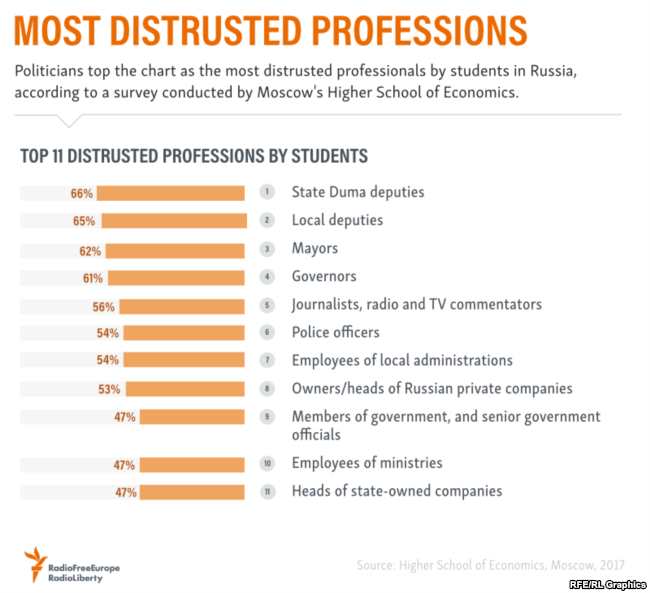 At the same time, only 19 percent said that demonstrations and protests are an effective instrument of political influence, compared to 72 percent who said they are ineffective. Only 14 percent said they were likely to take part in public protests.

"These aren’t people who would like to test themselves out at the barricades, because any protest activity presents a risk," she said. "They don’t want to take a risk. They want a comfortable life in which they can find self-fulfillment."

The study showed strong comparative support for Putin, whom 47 percent of respondents said they would vote for if a presidential election were held "next Sunday." Navalny finished second at 7.1 percent.

Kasamara added, however, that this finding suggests an institutional fragility.

"What you have here isn’t some strong trust in the institution of the presidency, but rather in Vladimir Putin," Kasamara said. "So they trust him, on the one hand, put their hopes in him, and don’t see anyone who could, in theory, be his successor. ...Everything is focused on one individual."

In the darkened auditorium at School No. 70 in Tolyatti on May 16, Matvei and his classmates watched silently as the narrator of the film -- called No To Extremism -- implored them in an ominous voiceover: "You can and must fight extremism in all of its forms," including "by supporting the actions of Vladimir Vladimirovich Putin to strengthen the country."

The film had previously triggered anger in the Samara Oblast, where Tolyatti is located, after it was shown in schools to children younger than 16, despite scenes of violence.

Mikhail Matveyev, an independent lawmaker in the regional legislature, sent out a flurry of inquiries to authorities about the propriety of the film in April after it was shown at the school where his son is in the seventh grade.

"I think it’s rather incorrect when politics begin to infiltrate schools, and when children become a field of battle between authorities and the opposition," Matveyev, a staunch critic of Samara’s pro-Kremlin governor, told RFE/RL.

Regional prosecutors said in a response dated May 4 and seen by RFE/RL that showing the film to children younger than 16 indeed violated laws protecting them from "harm."

Other official responses he received -- also seen by RFE/RL -- said the film was produced by the official television company of the regional government, not financed by specially allocated budgetary funds, and that individual schools made the decision to screen it.

Pressed by Matvei and two fellow students about why she showed the film, Olga Zhigulyovtseva, the director of School No. 70, said no one forced her to do it and that she was trying to help her students.

Zhigulyovtseva declined to comment on the video, posted on YouTube on May 16, when RFE/RL reached her by telephone.

In the video of the exchange with her students, she accused Navalny of being paid for his anti-Kremlin activism and warned Matvei and the others about involvement in protest politics.

She added: "You’re ruining your future."