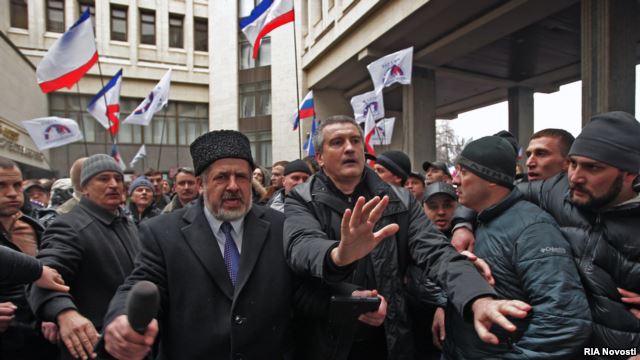 A court in Russian-occupied Crimea has rejected the defence’s application for Crimean Tatar Mejlis leader Refat Chubarov to give testimony in the ongoing ‘trial’ of Chubarov’s Deputy, Akhtem Chiygoz.  Refusal to question the most important witness demonstrates not only the true nature of a legally absurd trial, but also fear of the incriminating details Chubarov would provide regarding Russia’s invasion of Crimea.

Chiygoz has been in custody since January 2015 facing charges of ‘organizing a mass riot’.  The entire case is in breach even of Russian law, as he is charged in connection with a pre-annexation demonstration on February 26, 2014, over which Russia can have no jurisdiction.

He was arrested as the highest-ranking member of the Crimean Tatar Mejlis [representative body] in Crimea since Russia had banned Refat Chubarov from his homeland within months of its invasion.  Chubarov is now not only banned, but is also theoretically facing ‘criminal charges’, with Russia accusing him of ‘public calls to violate Russian territorial integrity’

Chubarov nonetheless offered to come to Crimea and give testimony in Chiygoz’s trial, with this fully supported by the defence.  As lawyer Nikolai Polozov explains, Chubarov is a key witness.  It was at his initiative that a meeting was held of the Mejlis on February 25, 2014.  There he explained that an extraordinary session of the Crimean parliament was planned the following day and, in his then capacity as a deputy of that parliament, he signed notification to the authorities of a demonstration on February 26.

All of this is clearly seen on many hours of video footage of the events that day.  The same footage shows much of the trouble that day being provoked by people from the pro-Russian side, and proves that Chiygoz and other Mejlis officials acted consistently to prevent conflict.

It is only Crimean Tatars who are facing charges, with the prosecution having pulled out supposed ‘victims’ who claim to have received injuries that day.  In declaring Chiygoz, Ali Asanov and Mustafa Degermendzhy political prisoners, the renowned Memorial Human Rights Centre noted, among other more important reasons, that such testimony aroused serious scepticism.  Virtually all prosecution witnesses remembered Chubarov, not Chiygoz.

Now, at the 117th hearing, the ‘court’ has refused to allow Chubarov to provide absolutely critical testimony.

The testimony would knock any claims that Chiygoz ‘organized’ the event on their head, but that is clear already.    Chubarov’s arrival, protected by the immunity Russian legislation envisages, would have almost certainly attracted a lot of attention. His testimony would have also highlighted the fact that Chiygoz is facing surreal charges, while the Mufti of Crimea, who later chose to collaborate with the Russian occupiers, is not.

The main reason, however, may lie in the vital information he would provide in the courtroom about the background to the events on the eve of Russia’s invasion.

As reported earlier, there are strong grounds for believing that the demonstration on Feb 26, 2014 spoiled Russia’s plan to seize Crimea without getting its hands dirty.  Chubarov has long spoken of this, with the tactics he suggested being effectively confirmed by the ‘Glazyev tapes’ -  taped conversations intercepted between Sergei Glazyev, a close adviser to Russian President Vladimir Putin, and other figures, regarding events in Crimea and Eastern Ukraine.  The conversations focus a great deal on the need to orchestrate ground-level support, and to persuade local councils to hold special sessions asking for help from Russia.

After initially denying that the soldiers who had seized control in Crimea were Russian, Putin changed his story, claiming that the process of what he called ‘returning Crimea to Russia’ had begun on Feb 23, immediately after Ukrainian President Viktor Yanukovych fled.

That too is false.  Former Russian military intelligence officer Igor Girkin [Strelkov], who played a major role admitted to having arrived in Crimea on Feb 21, before Yanukovych fled.

Things went according to plan in the genuinely pro-Russian city of Sevastopol, with Russian national Alexei Chaly being ‘appointed’ by a rally to the invented post of mayor.  This same scenario was tried later in Eastern Ukraine but largely failed.

It was the Crimean Tatar Mejlis who called on Crimean Tatars and other Ukrainians to gather outside parliament on Feb 26, 2014, to prevent a ‘vote’ changing Crimea’s status.

The huge crowds that day did indeed prevent the underhand coup.  Early the next morning, Russian soldiers seized control.   Despite the presence of Russian soldiers, the old scenario was still largely followed.   There are multiple reports about the real nature of the ‘parliamentary session’ in the afternoon of Feb 27, with even Girkin admitting that the MPs were forced to take part at gunpoint, with him heading the so-called ‘insurgents’ who carried out the coercion.

The Mejlis continued to remain firmly opposed to Russian occupation, with both Mejlis leaders suffering and this representative assembly of the main indigenous people of Crimea being banned.

Polozov believes that the refusal to allow Chubarov to testify shows that there is no point in even continuing the so-called ‘trial’ of Akhtem Chiygoz.  “It is absolutely clear that the sentence has already been fixed and that the remaining procedural activities are merely decorative covering for the decision taken by the Kremlin”.