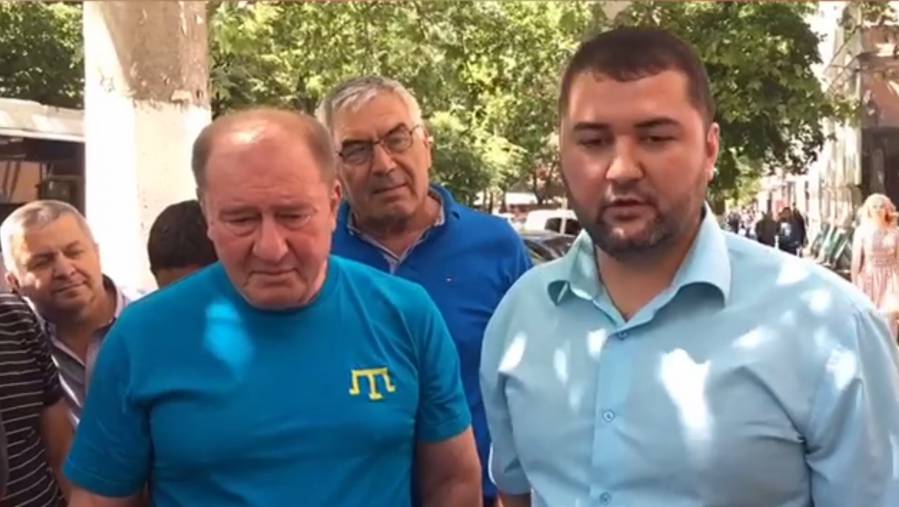 40 years after virtually all members of the newly-formed Ukrainian Helsinki Group were jailed for demanding only that the USSR honour its international commitments, a second Ukrainian has gone on trial in Russian-occupied Crimea for demanding that Russia do the same.  Crimean Tatar Mejlis leader Ilmi Umerov is facing a five-year sentence for saying that Russia should leave Crimea and Donbas, with the preliminary hearing as parody-like as one would expect under such circumstances.

All four applications from the defence were rejected.  If it was predictable that the request, backed by compelling grounds, to terminate the trial itself would be ignored, there was just a chance with respect to one absurdity.  The defence asked that the court reject as inadmissible ‘evidence’ an empty protocol from an unlawful attempt to interrogate Umerov’s lawyer Nikolai Polozov as a ‘witness’.

Polozov met Umerov for the first time when he began representing him, and the only thing he could be questioned about is his work as a lawyer.  The sole reason for claiming that Polozov is a witness is to deny Umerov his choice of lawyer, since it prevents Polozov from carrying on as his lawyer.  Polozov was first summoned for questioning back in September 2016, and immediately challenged this in the court.

Since any interrogation could only be about confidential information between a lawyer and his client, it was clearly illegal.  This was recognized by Judge Denis Didenko who back in September rejected the first attempt to get a court order forcing Polozov to ‘become a witness’.  The FSB tolerates no judicial independence, and the investigator Igor Skripka soon got the ruling overturned by Viktor Mozhelyansky, one of the ‘judges’ who has taken part in many politically-motivated cases.

That new ruling had not come into force on Jan 25, 2017 when Polozov was effectively abducted and taken to the FSB ‘for ‘questioning’.

It was that empty sheet of paper that the defence sought to have excluded from the case on May 31.  It is clearly indicative of what should be expected in this political case that the judge had no problem with using non-existent testimony as a means of depriving Umerov of one of his chosen lawyers.

The FSB may have miscalculated.  Polozov commented that as a ‘witness’, he will be able to express his views loud and clear in the court, whereas as lawyer, he would need to be a bit more careful in what he said.

Several dozen people came to the court building on Wednesday to show support for Umerov.  They included many members of the Crimean Tatar national movement and Ukrainian journalist Mykola Semena, who is himself facing virtually identical charges.

Preliminary hearings are always behind closed doors, and largely formal.  The first open hearing is scheduled for June 7.

The original indictment is worth quoting in full.  It claims that Umerov “with intent to carry out activities aimed at violating the territorial integrity of the Russian Federation, … deliberately and publicly called on an unlimited number of people to carry out actions aimed at returning the Republic of Crimea under Ukraine’s jurisdiction”.

Ilmi Umerov is held in high esteem far beyond Crimea and the methods of persecution, including punitive psychiatry, used against him have been intentionally condemned.