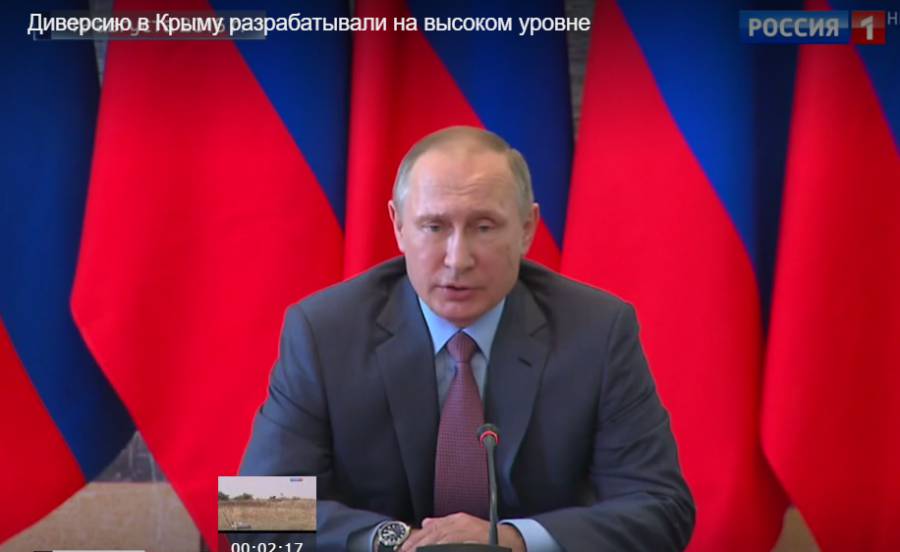 Volodymyr Prysich, the fourth Ukrainian shown on Russian state television in August 2016 ‘confessing’ to ‘sabotage’ and ‘spying’ for Ukrainian military intelligence, has been sentenced to 3 years’ imprisonment on a totally different charge.  Prysich told a court in Russian-occupied Crimea that the ‘confession’ had been tortured out of him, and that the charges now laid were equally fictitious.

On August 10, the FSB claimed that it had foiled terrorist acts planned by the Ukrainian Defence Ministry’s military intelligence.  It asserted that there had been major incidents, with shelling from mainland Ukraine, during the nights from 6-7 and 7-8 August, with 2 Russians – an FSB officer and a soldier – killed.  Although two Russians did die, there are independent reports suggesting that at least one of the men was killed in a drunken brawl.  There was nothing to back the claims about the second night and supposed shelling from Ukraine.

Moscow made a lot of noise, yet provided no proof, with the story hinging entirely on four televised confessions. All four alleged ‘Ukrainian Crimea saboteurs’ – Yevhen Panov; Andriy Zakhtei; Ridvan Suleymanov and Volodymyr Prysich remain in custody, however the charges against two men are quite different from their ‘confessions’, while in three cases, the men have themselves stated that were tortured into giving them.

Least of all was known about Prysich whose very arrest was only learned about from a report on state-controlled Rossiya 1 TV channel.  On August 21, he was presented as a truck driver from Kharkiv who had ‘confessed’ to having been recruited by Ukrainian military intelligence in January 2016.  Driving around Crimea, he was supposed to have gathered information about the deployment of military technology.

Unlike Yevhen Panov, the first Ukrainian whose ‘confession’ was broadcast on Russian television, Prysich did not bear obvious signs of beating or torture, but he did recite his ‘confession’ as though reading from a script.

He asserted then that he had been recruited by a military intelligence officer called Oleh, codename Musa, with his task being to follow the movement of technology, and pay attention to its type, any marks identifying it and number plates identifying the region. They had supposedly installed a program on his telephone which passed on information and instructions. He said that he had been in Crimea 8 times, he says, up till August, and passed photographs of military technology, etc. to the military intelligence man 5 times.

This was part of a longer feature about the supposed attacks by two groups of saboteurs, with a former Russian military intelligence officer saying that all of this had been planned at a high level, and that only the chief military commander “could take responsibility for carrying out a military operation in peacetime.”

The Crimean Human Rights Group has now learned that Prysich was sentenced on May 18, 2017 to 3 years’ imprisonment.  The sentence was handed down by Pavel Kryllo from the Gagarin District Court in Sevastopol and on a charge of possession of a narcotic substance.

Suleymanov’s trial has not yet ended, but the charges in his case have also changed dramatically despite his recorded confession.  He is now accused of having made a false bomb alert with the prosecution claiming, without any evidence, that this had caused losses of an incredible four million UAH (see: Russian FSB radically changes the plot in its ‘Crimean saboteur’ trial).

Yevhen Panov was the first Ukrainian to be shown on television, and then Andriy Zakhtei.  Panov was held without access to a proper lawyer for two months until his family and human rights activists managed to get the European Court of Human Rights to apply Rule 39 and demand details about Panov’s physical condition and his access to a lawyer.  He was finally then able to briefly meet with his lawyer to whom he confirmed that his testimony had been tortured out of him.  He was also immediately taken, together with Zakhtei, to Moscow and imprisoned there.  This did not help the FSB hide the case and they were eventually returned to Crimea where their detention has just been extended once again (see Russia has more than torture to hide in FSB’s ‘Ukrainian Crimea Saboteur Plot’),