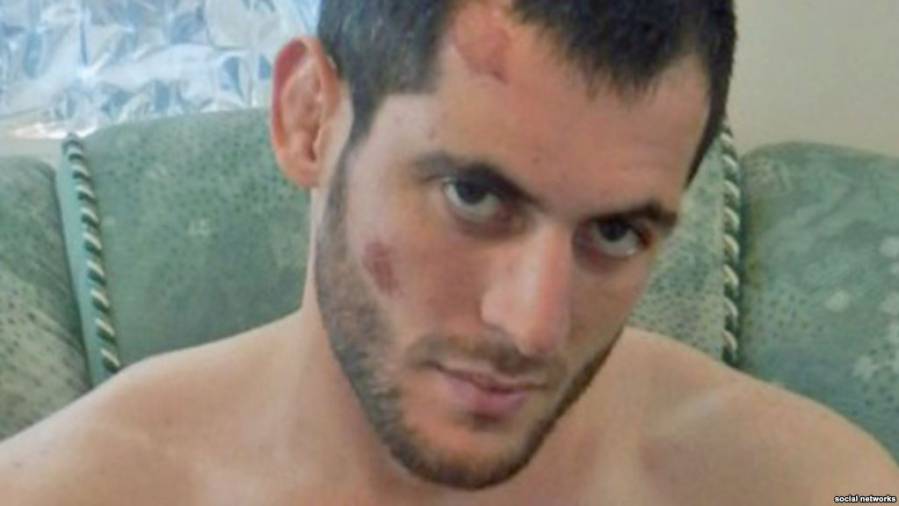 Murad Amriyev is shown in a photo from 2013, when he says he was kidnapped, beaten, and tortured by Chechen police.

In the end, a typo in a passport could fell a Russian mixed-martial-arts fighter who accuses police in Chechnya of torturing him.

Murad Amriyev, a 32-year-old MMA fighter from the southern Russian region ruled by Kremlin-backed strongman Ramzan Kadyrov, was facing deportation from Belarus on June 8, a transfer that rights activists say would place his life and well-being at risk.

On paper, Amriyev is suspected in Russia of knowingly using a false document -- a result, his mother says, of an erroneous birth date in his passport.

Bubbling under that charge, however, is a tale of alleged torture and blood revenge and a daring flight from the clutches of Kadyrov’s feared security forces, whose reach has extended far beyond the borders of the North Caucasus region that was at the center of two devastating post-Soviet wars.

Amriyev’s plight began in August 2013, when he says he was kidnapped by police in Chechnya and subjected to torture, including electric shocks to his body.

He claims a top Chechen police official accuses his brother, who now lives in Germany, of trying to kill him and has declared the MMA fighter a blood enemy. Chechen authorities deny Amriyev’s torture claims and won a defamation caseover the allegation before a regional court in 2015.

He sought assistance from the Committee for the Prevention of Torture, a Russia-based group active in Chechnya and loathed by Kadyrov, who has ruled the region with Kremlin backing since 2007 and whose security forces are accused by rights activists of brutal abuses and extrajudicial killings. Kadyrov denies these allegations.

Amriyev fled to Ukraine after his release and participated in MMA bouts there. But he returned to Russia on June 4 to renew his documents.

However, he was pulled off a train by police and detained in the western Bryansk region, bordering Ukraine, sending rights activists scrambling. The Committee for the Prevention of Torture warned that he risked death if he were handed over to Chechen security forces.

A dramatic cat-and-mouse game unfolded in Bryansk, where Chechen investigators arrived and verbally sparred with local prosecutors over Amriyev’s custody, lawyers who assisted the detainee say.

After Amriyev was held for 48 hours, he was formally released from custody. But a Chechen police officer and a group of special forces officers -- identified by lawyers as from the Bryansk region -- were waiting outside the prosecutors’ office to detain him, Pyotr Zaikin, a lawyer who was with Amriyev at the time, told RFE/RL.

In a video shot inside the building, Amriyev said he recognized one of the Chechen police officers who had arrived at the scene as a man who he claims took part in torturing him in 2013.

According to Zaikin, the Chechen officials apparently did not have the proper documentation to secure his transfer into custody. And as they argued with Bryansk prosecutors about Amriyev, the MMA fighter -- knowing that he was technically a free man -- simply walked out the front door, hopped in a waiting car, and sped off, Zaikin said.

He said the police forces waiting for him outside did not move to grab Amriyev.

"They weren’t expecting that, in this situation, he would calmly walk out the main entrance, and they got a bit confused," Zaikin told RFE/RL.

Another human rights lawyer who was at the Bryansk prosecutors’ office said the Chechen police officials were "furious" when they learned their target had vanished.

"They ran around the building looking for Amriyev and screaming, ’Where is he?’" Anastasia Garina of the Committee for the Prevention of Torture wrote in a June 7 Facebook post.

Amriyev’s freedom was short-lived. Belarusian authorities told RFE/RL on June 8 that he was being held in the town of Dobrush, near the border, and that papers were being drawn up to hand him over to Russia.

Anton Bychkouski, a spokesman for Belarus’s state border committee, was quoted by Russian news agencies as saying that Amriyev was detained, based on the Russian false-documents allegation, shortly after 5 p.m. on June 7 after crossing into the country in a Toyota.

Amnesty International says that Amriyev is “still at risk of being arbitrarily detained and transferred to Chechnya, where he would be at risk of torture.”

In a statement released prior to reports of his detention in Belarus, Amnesty International said that Amriyev is "still at risk of being arbitrarily detained and transferred to Chechnya, where he would be at risk of torture."

Amnesty urged the Russian government to protect Amriyev and investigate "the actions of the Chechen Ministry of Interior officers who attempted to arbitrarily detain" him in Bryansk.

In a June 8 statement, Amnesty urged Belarus not to hand Amriyev over to Russia, citing Minsk’s status as a signatory to the UN Convention Against Torture and the Convention on the Status of Refugees.

Security forces under Kadyrov’s control have previously carried out operations against targets in Moscow and in other Russian regions far from Chechnya. Austria also accused a Chechen policeman of assassinating a former Kadyrov bodyguard in Vienna in 2009 before fleeing the country.

In a video posted on YouTube on June 8, Amriyev’s parents pleaded for help, saying their son faces "deadly danger" if he is returned to Chechnya.

"Our son suffered abuse, was kidnapped, and we couldn’t help him at all," his father says in the appeal. "Please help prevent this transfer. He is not guilty of anything. He didn’t violate the law. They just want to settle personal scores with him."

An unidentified law enforcement official in Chechnya downplayed concerns about the region’s pursuit of Amriyev, telling Russia’s state-run TASS news agency that officials merely wanted to bring the MMA fighter in for questioning under a federal warrant and that formally he has not been charged.

Amriyev’s mother told Current Time TV, the Russian-language network run by RFE/RL and Voice of America, that her son’s original birth certificate was destroyed in 2000 during a bombing of Grozny in Russia’s second bloody war with separatists in Chechnya.

She said she noticed the typo in her son’s documents when she was restoring his records: his birth year was listed as 1986 instead of 1985 -- the mistake that ultimately made its way into his passport.

"I said, ’Oh, what should we do now?’" Roza Amriyeva said she asked the woman handling the paperwork. "She answered: ’It’s no big deal compared to what’s happening right now.’"