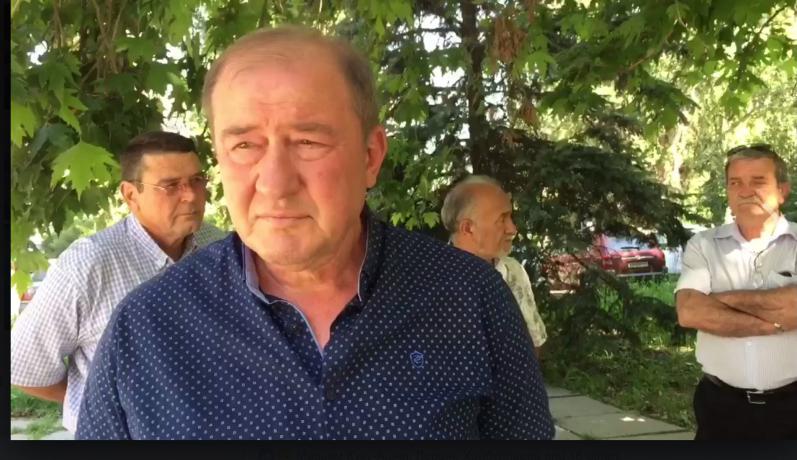 The trial of Ilmi Umerov for saying only what the UN and entire democratic world says about Russia’s occupation of Crimea was always going to seem grotesquely Kafkaesque.  It has now transpired that Russia did not even (or could not) find an ‘expert’ willing to give testimony against the Crimean Tatar leader who actually knew Crimean Tatar.  This is no small omission given that Umerov is on trial for statements made in that language.

During the questioning on June 21 of the Russian FSB’s ‘specialist’, Olga Ivanova, she proved to have studied as a linguist and translator of English and Chinese, and to have worked for the FSB for the last two years.

She said that she had been given a text which the investigator called the ‘transcript’ of Umerov’s interview to TV ATR, as well as the actual video.  She had not watched the latter (in Crimean Tatar) and could not therefore say whether the text had or had not been a transcript.   This alone is a flagrant breach of the law.

Nowhere is it written in the material of the expert assessment and conclusions that the interview was given in Crimean Tatar.  That was almost certainly a deliberate omission, since there was no transcript of the actual text, only a ‘translation’.

The supposed expert conclusion, on 21 pages, had been put together on the same day as it was requested, though Ivanova had previously stated that such assessments take at least a day and sometimes up to a month.   Does it perhaps take longer to write such an assessment when you actually know the language?

The linguist was unable to explain how she understands the term ‘transcript’ and what relation this had to the text that she had been presented with.  She was just as much at a loss to name any laws and documents on the basis of which Crimea was supposed to be a part of the Russian Federation.  Umerov is, after all, charged with ‘public calls to action aimed at violating Russia’s territorial integrity’ essentially for saying that Russia must stop occupying Crimea.

Her conclusions, Ivanova claimed, about the existence of such ‘public calls’ were based on the ‘general tenor of the text’.  Ayshe Umerov, reporting from the courtroom, notes that had Ivanova even tried to do more than simply carry out an order, she would have noticed that her father had been referring to sanctions and a diplomatic solution of the problem.

Even the judge in this political trial had to allow the application for documents to be produced confirming (or otherwise) Ivanova’s professional qualification.

Podrabinek explained that the 59-year-old Deputy Head of the Crimean Tatar Mejlis was supposed to have made such ‘public calls to action aimed at violating Russia’s territorial integrity’, by stating that Russia should leave Crimea, which should return to Ukrainian jurisdiction.

This, Podrabinek says, is similar to the Soviet claims that this or that defendant had “come out against socialism”  “That was such cast-iron proof of guilt for the Soviet authorities that nothing more was required”.

He sees the same thing taking place in the trial of Umerov.  It’s clear that there is no attempt to analyse the indictment and ask what is criminal in Umerov having said that Crimea should be returned to Ukraine.

“Where is the crime?  There is no proof, no basis in evidence and the case is cluttered with some kind of prosecution rubbish, the protocols from meaningless interrogations, documents certifying insignificant facts. For example, that Umerov crossed the border at such and such a time and under such and such circumstances.  He’s not disputing that.  Nor that he went to Kyiv, spoke on Channel ATR and said what he said”.

Perhaps they could add information about the rate of exchange that day, and what the weather was like, he suggested. Anything will do if the task is to come up with a ‘case’ in three volumes imitating proof.

Podrabinek finds the level of fabrication of the case against Umerov very similar to those against Soviet dissidents.  There is the same lack of interest from the authorities and investigators to even bother with any law-based real analysis of events, the same total disregard for the laws in place now in Crimea, and back then in the Soviet Union. There is nothing surprising in this, he says, since all totalitarian regimes are very similar to each other.

At the hearing on June 14, Emil Kurbedinov from the defence team applied for permission to video and photograph the proceedings, in accordance with the principles of open court hearings.  He also asked for official audio-recording of the proceedings which can be used later as proof of the information received in court.

The prosecutor objected, claiming that FSB ‘employees’ would be questioned during the hearings and that they probably would not wish to be recognized.  The court, as usual, went along with the prosecutor, rejecting both applications.

The reason for such resistance to this ‘trial’ being recorded becomes clear from the account given by Umerov’s defence team –Kurbedinov; Edem Semedlyaev; Mark Feygin, and Podrabinek as civic defender.

Only one ‘witness’ was called, with her testimony essentially more of the litter that Podrabinek was talking about, yet it served in this case as a particular indictment against the prosecution.  It transpired that she had signed the pieces of paper thrust in front of her which were purportedly minutes of her interrogation, although there had been no questioning.

If that was all that the prosecution has managed to come up with, Feygin commented, it only confirmed that there was, in fact, one aim and one aim alone, to bring politically motivated proceedings against the Crimean Tatar leader.

The questioning of the supposed linguistic expert only confirmed this.

Ilmi Umerov was, until March 2014, the Head of the Bakhchysarai Regional Council.  He left that post because he was not willing to collaborate with those who had invaded and occupied his homeland.

He was initially detained on May 12, 2016 and charged in connection with the March 19, 2016 interview in which he stated that Russia should leave Crimea and Donbas.

The indictment, an opus in itself, claims that Umerov “with intent to carry out activities aimed at violating the territorial integrity of the Russian Federation, … deliberately and publicly called on an unlimited number of people to carry out actions aimed at returning the Republic of Crimea under Ukraine’s jurisdiction”.