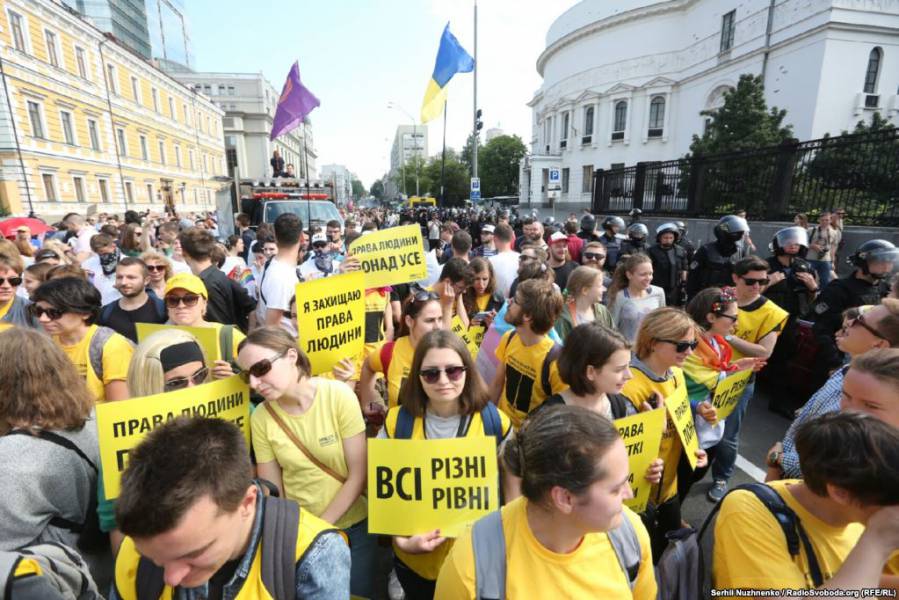 Thousands of gay-rights activists marched in a pride rally in Ukraine’s capital, Kyiv, on June 18 amid a massive police presence.

According to police, some 2,500 people gathered for the March of Equality in the center of Kyiv, which started near Taras Shevchenko Park and lasted for more than one hour. An estimated 5,500 officers ensured that the event proceeded without disturbance.

Participants had initially planned to march down Volodymyrska Street, but the route was changed due to the presence of antigay protesters and nationalist activists.

A counterdemonstration by a few hundred ultranationalists degenerated into scuffles with police in which two officers were injured and six people arrested, Kyiv police chief Andrey Kryschenko said.

Police performed security checks among the protesters and confiscated balaclavas, gas canisters, eggs, and green paint. Six antigay protesters were detained after they attempted to break through the police cordons.

Gay-rights activists from Switzerland and Israel also participated in the event.

The ambassadors of Britain and Canada, Judith Gough and Roman Waschuk, attended the march in a sign of support for Ukraine’s LGBTI community. Waschuk told reporters that Canada stands for equal rights.

In a statement issued ahead of the march, rights watchdog Amnesty International said that Ukrainian authorities "must not only provide adequate security for the LGBTI marchers at this weekend’s pride event in Kyiv but also address structural causes of discrimination in the country, including addressing impunity for hate crimes, hate speech, and incitement to violence."

Kyiv held its first major pride march last year after a pro-Western government that came to power in 2014 sanctioned such events.

Last year’s March of Equality, held on July 12, attracted some 1,000 participants and was guarded by some 5,500 police and 1,200 soldiers from the National Guard. Last year’s parade passed off mostly without incident, despite threats from far-right groups who said they would disrupt proceedings.

In 2015, the march was called off when right-wing activists pelted participants with smoke grenades.