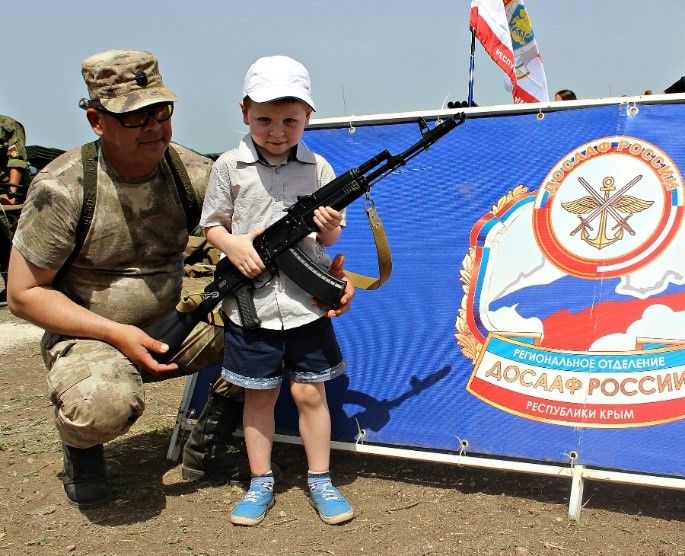 A Crimean member of the Jehovah’s Witnesses has been ordered to provide ‘proof of change of faith’ in order to be eligible for alternative civilian service. Russia is already in grave breach of international humanitarian law by conscripting young men on illegally occupied Ukrainian territory, and is now also applying a form of religious repression which hearkens back to the worst Soviet times.

The young man in question received a summons from the Bakhchysarai military recruitment commission for June 14. The document includes a handwritten demand that he present “documents confirming change of religion”. 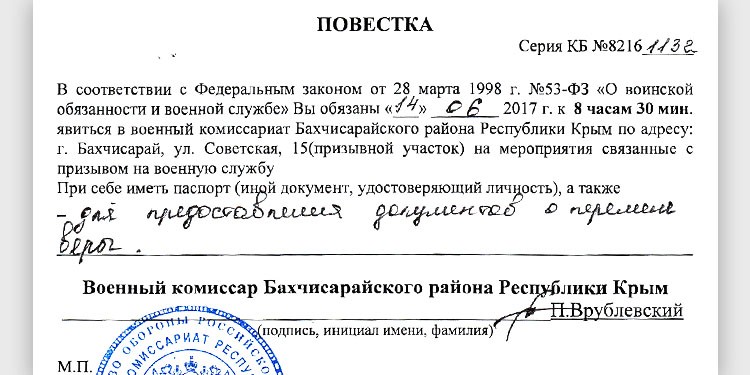 The Jehovah’s Witnesses’ Russian website reports that the lad had visited the office on June 9 and been offered alternative civilian service. He was told, however, that this was only if he renounce his Jehovah’s Witnesses faith. The summons posted on the site is apparently one of two received, with exactly the same wording, and no indication as to which religion he is supposed to ‘change’ to. It is also reported that Russia has already denied at least one Russian Jehovah’s Witness the right to alternative civilian service, citing the Russian Supreme Court’s ruling banning the faith.

This ruling on April 20 (by judge Yury Ivanenko) followed an application lodged by Russia’s justice ministry, asking for the court to order the dissolution of the Jehovah’s Witnesses Administrative Centre and 395 regional branches. Their activities were claimed to be ‘extremist’ and were suspended pending the Court decision.

The ruling flouts Russia’s Constitution and, unless overturned at appeal level on July 17, must inevitably reinstate Soviet-style religious persecution. Many young men are likely to again be forced to go to prison, rather than taking up arms which the Jehovah’s Witnesses strictly prohibit.

Russia is openly flouting the UN General Assembly and the Fourth Geneva Convention by conscripting young men from occupied Crimea into the Russian Army. In 2017, for the first time since Russia’s invasion, Crimeans will be sent to regions of the Russian Federation. Criminal liability and other measures have also been increased since April 1 against those unwilling to do such ‘military service’, and at least one young man from Yalta is known to be facing criminal prosecution for refusing to serve in the Russian army.

Article 51 of the Geneva Convention relative to the Protection of Civilian Persons in Time of War states unequivocally that “the Occupying Power may not compel protected persons to serve in its armed or auxiliary forces. No pressure or propaganda which aims at securing voluntary enlistment is permitted”.
Article 49 prohibits “individual or mass forcible transfers, as well as deportations of protected persons from occupied territory to the territory of the Occupying Power or to that of any other country, occupied or not”. This, of course, applies also to Russia’s continuing imprisonment in Russia of Ukrainian political prisoners and its ‘deportation’ of Crimean Tatars.

Russia’s denial that it is occupying Crimea has been rejected by the entire democratic world. The Chief Prosecutor of the International Criminal Court issued a preliminary report on Nov 16, 2016, which found that the situation with Crimea constitutes an international armed conflict between Ukraine and the Russian Federation.

The Crimean Human Rights Group has repeatedly warned that Russia’s defence ministry is continuing to wage propaganda of military service. On June 12, they held large-scale events in both Simferopol and Sevastopol entitled: ‘Military contract service is your choice’. Various entertainment stunts and an exhibition of military technology were used to attract people in direct violation of the Geneva and other international conventions.

Russia’s occupation of Crimea has generally been accompanied by mounting war propaganda and the deliberate militarization of public awareness. Children are particularly targeted in the campaign of disinformation, stirring up of enmity towards Ukraine and the glorification of war in Crimean schools (details here).