Journalists under investigation for divulging judges’ rulings from foreign beachesRigged and Secretive Fight against Corruption?Government accused of rigging anti-corruption selection commissionHead of Traffic Police Dismissed after Scandalous Lifestyle ExposedIt’s Tax Time In Ukraine, And Financial Discrepancies Suggest Corruption EnduresBehind the declarations: how public officials lived – and live nowParliamentarians’ secrecy regarding income given judicial OKVerkhovna Rada and Constitutional Court least willing to divulge public informationCourt rejects Verkhovna Rada claim that staffing details are not for the publicOPORA takes secretive Verkhovna Rada Office to courtCHESNO: Office of the Verkhovna Rada flagrantly violating Public Information ActUkrainska Pravda takes parliament to court over concealed informationResidences of Azarov, Lytvyn and Yushchenko to cost the taxpayer 50 million UAHCourt has no problem with parliament not handing over MP’s declarationsVerkhovna Rada Office refuses to hand over Deputies’ declarationsPublic Information Law like a Bolt from the Blue for the AuthoritiesCVU: Ukrainian authorities not ready to be openFirst legal proceedings over alleged infringement of Public Information LawStop Censorship will force Deputies to make their income declarations publicThe Public are most interested in how public funding is spent
• Topics / The right to a fair trial
• Topics / Law enforcement agencies 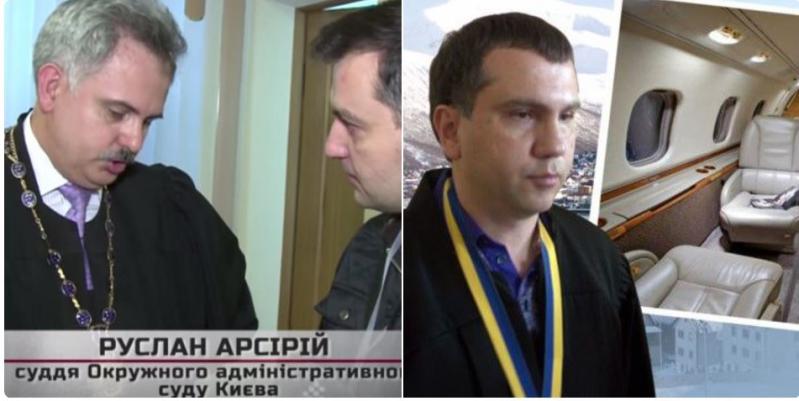 Two years after a journalist investigation found evidence that certain Kyiv judges had ‘issued court rulings’ from their holiday spots abroad, the alleged probe into the judges’ behaviour has been quietly shelved, unlike the criminal investigation involving the Slidstvo.info journalist, Dmytro Hnap.

On April 1, 2015, Slidstvo.info broadcast a program entitled “Beach Control”.  This was presented by Hnap who began by explaining that they had already revealed details about the “sumptuous lifestyle” of Ukrainian judges – their multiple properties and vast amounts stashed away in bank accounts.  Now they were turning their scrutiny to where judges from the Kyiv District Administrative Court relax.  Pavlo Vovk, President of the Court was reported to have visited 18 countries in the past four years, some of them more than once.

The program produces evidence suggesting that “some judges like warm sea so much that they manage to issue their rulings literally on the beach”.

One judge – Ruslan Arsiriy – was alleged to have ‘passed’ several rulings while outside the country. Over the past four years he had holidayed in 11 countries, in some more than once.  The journalists explain how Arsiriy while abroad, together with judges Oleksiy Ohurtsov and Ihor Pohribnichenko, issued a ruling preventing the state from reclaiming 20 gas fields received by the firm Golden Derrik during the presidency of Viktor Yanukovych.  The report asserts that Golden Derrik is controlled by two people close to Yanukovych – former energy minister Edward Stavitsky and ex-minister of agriculture Mykhailo Prysyazhnyuk.

These were very serious allegations which demanded a reaction.

Unfortunately, the main response reported at the time was the first summons received by Hnap on June 16.  He was called as a witness for questioning in a criminal investigation initiated by Ukraine’s military prosecutor over alleged divulgence by Security Service [SBU] officials of information on restricted access – about travels by Ukrainian judges.

The criminal investigation was terminated at the end of December 2016, however Hnap has told Skhemy that it has now been restarted.

Skhemy, a joint investigative journalism program by Radio Svoboda and Ukraine’s UTV-1, has just published its probe into the fate both of the allegations of judges breaching the law by passing court rulings while sunbathing abroad and of the investigation involving Hnap.

Serhiy Andrushko points out that a search was carried out of the Kyiv District Administrative Court back in February 2015 over the suspected court rulings passed by judges in absentia.

Volodymyr Keleberda, Deputy Head of the Court, reportedly stated at the time that judges were allowed to pass rulings from outside their “workplace”, although he did not directly justify holiday resort court rulings.

Skhemy’s Serhiy Andrushkho spoke with Pavlo Vovk, the Head of the Court and a candidate who seems set to be appointed a Supreme Court judge despite a number of serious corruption allegations and a current investigation by the National Anti-Corruption Bureau into suspected illegal enrichment.

Vovk said that all cases initiated against judges for alleged court rulings while abroad had been terminated “because judges can’t pass rulings abroad”. He claimed that the cases had been initiated purely to undermine their authority.

Rights lawyer Vita Volodovska rejects this and points out that information as to whether an investigation is underway is public information which should be on open access.

Two months later, on April 11, the journalists were informed that all investigations had been terminated more than a year earlier, because no elements of a crime had been found.

It appears to be asserted that the dates in almost 50 rulings issued by 10 judges while abroad were ‘typos’.  The prosecutor’s office had questioned the judges and their assistants and been assured that the dates were simply ‘mistakes, with the judges “at their own initiative” passing new rulings to rectify the ‘errors’.

The criminal investigation into how the information about the supposed typos and judges’ travels has proved much more resilient.  The investigation into “disclosure of documents with limited access was lodged on the basis of a complaint by one of the most jet-setting judges, Ruslan Arsiriy.

Hnap explained to Skhemy that he had been questioned several times as a witness, with the prosecutor demanding to know where he had received the information and from whom.  He has refused to provide any information, citing his rights under the Constitution to not reveal his sources.  The information in question, he says, can also not be considered the judges’ personal data in this case and it should be revealed as clearly in the public interest.

The judges challenged the termination of that investigation and this has now been reinstated, unlike the investigations into a highly improbable epidemic of ‘typos’ affecting only incriminating dates.