Against All Odds, Ukraine’s Refugees Rebuild 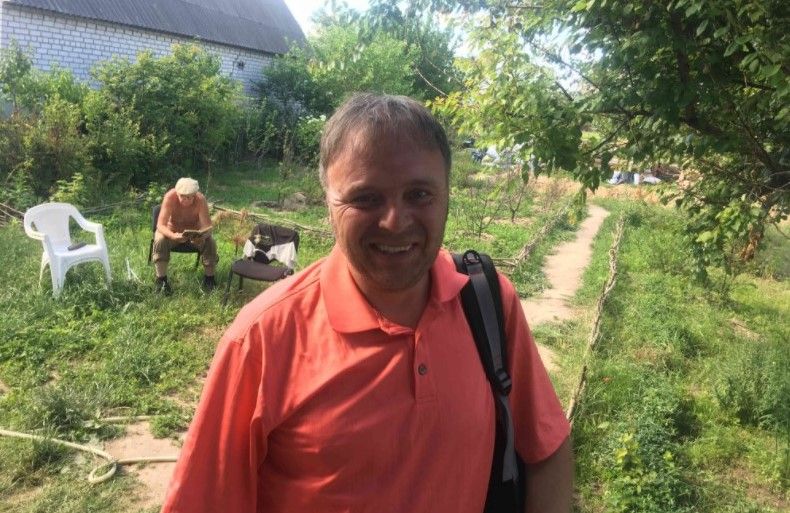 The unfinished concrete block house outside Kyiv is home to twenty-three refugees who were evacuated from the war in Ukraine. They share one bathroom, one kitchen, one television, and sleep on bunkbeds on its second floor. Furnishings are makeshift, the house is dark, appliances are donated, and the stairs are rickety. Most are elderly, two bedridden, and one is blind.

But in the cluttered garden, Nikolai Fyodorov sits in his wheelchair and says “to me this is a fairy tale.”

That is because despite his current living conditions, he’s lucky. Some 1.8 million Ukrainians like him have fled the war and many are homeless or cannot obtain health care, schools for their children, or jobs.

Nikolai left Krasnogorovka, a village near Donetsk, because of constant shelling.

“My son, wife, and three little kids went to Russia, but I had nothing there,” he said. “I stayed until I had to leave. I have not heard from them since.”

He was taken in by Oleg Gorbachev who ran a shelter for the homeless, drug addicts, the elderly, and other vulnerable groups in Luhansk. When the conflict broke out in April 2014, his facility was plundered by a pro-Russian militia.

“I decided to evacuate people, although the thirty-hour route to Kyiv seemed unachievable,” said Gorbachev. He drove his family, found premises, and began ferrying people from the Donbas.

“The scale of the problem is bigger than one can imagine,” said Oleg. “Their stories are terrible. Each one was cheated or deprived illegally of their homes and belongings. Sometimes relatives refused to help them. But now they have new hope, friends, are not lonely, and are without fear.”

The place survives from donations, help from a Protestant church, volunteers, and a village doctor who donates time. Only twelve of the twenty-three get government pensions of $17 a month, and they donate 70 percent toward the cost of food.

Fortunately, an NGO called CrimeaSOS raised enough money through crowdfunding to replace Oleg’s van recently. “I hope we can crowdfund enough to buy the house and put in an elevator,” he said. “It would cost 500,000 hyrvnia to buy (roughly $19,000).”

Volunteers do major tasks and nursing, and the healthier residents share chores and the cooking. “If they do chores, they feel better about their situation,” said Gorbachev.

He raises donations, grocery shops, manages the volunteers, and helps them get documents so they can obtain pensions, medicines, and healthcare.

“Some of the residents make camouflage nets in the backyard for ambulances going to the front and do this in return for food,” said Olena Vynogradova, a legal analyst with a Ukrainian Charitable Foundation “Right to Protection” who took me to the hostel.

She said the burden on Ukraine is substantial and its “refugee” population is the size of Turkey’s or Jordan’s. Then there are those left in the warzone.

“Tens of thousands more are in danger all the time who live in the ’Non-Government Controlled Areas,’” she said. “Old people or disabled people are stuck there without doctors, police protection, postal service, water, electricity, heat, and are shelled constantly.” She said Ukrainian officials are not allowed in and only three NGOs can go in.

The region is lawless and besides human rights abuses there are “children being sold,” “sex trafficking,” and “organ trading,” she said.

Tiny Nina Simyonkina lives here and uses a cane. She also feels very “lucky” to be here. Her son in Kyiv doesn’t take care of her and she lost her apartment in Luhansk while visiting friends in Russia when the invasion took place.

“Burglars moved in, then my neighbors went to court and took the apartment, claiming it was abandoned,” she said. “I came back and was homeless. I got into a hostel but was frightened by the Russian separatists who came in demanding that we swear allegiance.”

Another evacuee, Viktor, washes dishes in the backyard sun. He lived months in the basement of his village home because of constant shelling. He is deaf and 78 years old.

Another man, sprightly and fit, is weeding the garden while another digs a large ditch where they will refrigerate food in the winter.

Alexei Karpushyn is a middle-aged resident who said he was “nearly dead” due to medical problems when rescued by Oleg. He now works alongside him.

“We had normal lives and lost everything in a second,” he said.

The invasion was planned for some time and then “marginal people” were hired to be militias.

“I think the Russians will leave eventually, but they will steal everything before they do,” Karpushyn said.

The youngest resident is a mere 16 years old. Oleg took care of him and his single mother for several years until she recently died. He attends a nearby college.

“He’s a good boy. We look after him, and make sure he does not make bad friends,” said Karpushyn. “He wants to be a chef. Now he can be, and that will make us all very happy.”