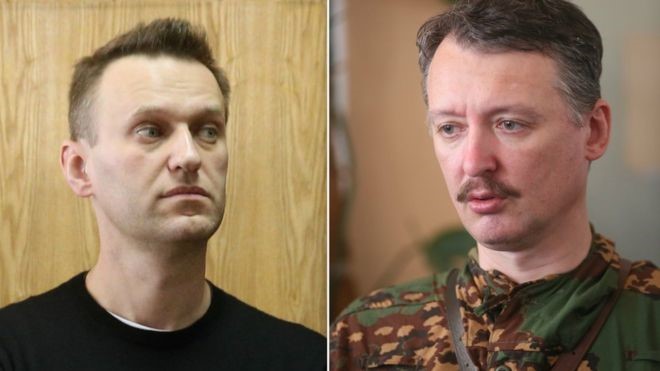 Russian opposition leader Alexei Navalny has agreed to a ‘debate’ with Igor Girkin, the ex-Russian military intelligence officer who played a crucial role in Russia’s invasion of Crimea and military aggression in Donbas.  Unlike Navalny, who has faced numerous prosecutions on politically motivated charges, Girkin remains untouched in Russia under President Vladimir Putin. He has, however, been under international sanctions since Russia’s annexation of Crimea, and Ukraine has ample evidence to seek his trial for war crimes at the International Criminal Court at the Hague.

Girkin, whom Navalny refers to by his nom de guerre Igor Strelkov, used a television address to challenge Navalny, to a ‘public debate’.  Girkin claims to be representing ‘Russian nationalists’, and, in Navalny’s words, wants to prove that the latter is no patriot, no nationalist, and not even an opposition figure.  Three questions are set out for the debate: How Navalny will overcome corruption if he becomes President; his position regarding Russia’s western partners; and what he will do, as President, with Donbas and Crimea.

Navalny is a politician, and his answer is clearly aimed at extending his electorate.  While he speaks of the Kremlin having used many nationalists like Girkin “to push its imperialist, anti-Ukrainian and anti-western propaganda and use them to begin a harmful war which is disastrous for Russia”, he then panders to those very nationalists by saying that the Kremlin is now “putting pressure on them, driving them into the underground and turning them into marginal figures”.

In fact, the individuals whom Moscow gave nominal power to for some time in Crimea and Donbas had always been marginal figures, often from far-right Russian nationalist groups.  It was the Kremlin’s people who gave them weapons, tanks and ensured an unending flow of mercenaries and ‘volunteers’ for them to bring death and destruction to Donbas.

Navalny’s position on Crimea has always been questionable.  Although he has now backed off his original statement that he would not return Crimea if he became President, he has more recently talked vaguely of a ‘second referendum’.  The first was both illegal and falsified.  Thousands of Ukrainians have since been driven from their homeland, and Russia is currently bringing in Russian citizens in large numbers.  All of this is well-reported, making Navalny’s suggestion that any ‘referendum’ could have legitimacy at very least ingenuous.

Whatever his political aims, Navalny should have understood the inadmissibility of giving credence to a person suspected with cause of war crimes by joining him on a public platform.  Nikolai Polozov, one of the Russian lawyers defending the Kremlin’s Ukrainian political prisoners, was spot on in saying that the only ‘debate’ Girkin should be taking part in is a court debate at the Hague.

Girkin is believed to have been a GRU or Russian military intelligence officer until at least 2013.  He was heavily involved in Russia’s invasion of Crimea, before moving to Donbas where he led the heavily armed men who seized control of Sloviansk in April 2014.  He later acted as ‘defence minister’ of the so-called ‘Donetsk people’s republic’ [DPR].

He and Alexander Borodai, another far-right Russian DPR leader, were removed in late summer when it became politically expedient for the Kremlin to install Ukrainian nationals in top posts.  In Girkin’s case, this had become particularly desirable after the downing of the Malaysian airliner MH17.

In March 2016, following Girkin’s public admission that he had ordered extrajudicial killings during his period as military leader of the Kremlin-backed militants in Donbas, Arkady Chaplygin, a lawyer from St Petersburg formally demanded that Russia initiates criminal proceedings against Girkin for committing what were undoubtedly war crimes in eastern Ukraine.

The interview which Girkin gave to the pro-Kremlin Komsomolskaya Pravda in 2016 has now been removed, but it was very widely reported, and there will certainly be a cached copy of Girkin’s admission to war crimes.

He was asked how they had fought looting, and answered “through executions”, with the use of legislation on ‘military courts’ introduced by Soviet dictator Joseph Stalin in 1941. He admitted to four such executions in Sloviansk, with one person having been “an ideological supporter” of the Ukrainian nationalist ‘Right Sector’.

This may have been the first time that Girkin admitted to the executions, but his aide, Igor Druz had informed the BBC of them back in August 2014.  While Girkin admitted only to killing ‘looters’, Druz was entirely open, saying that the militants had killed a number of people “to prevent chaos”.

Chaplygin pointed out that the crimes fell under the jurisdiction of Russia’s investigative bodies since they were carried out by a Russian national, and the foreign state (Ukraine) had not passed any sentences.  Well over a year has passed since then, and Girkin remains free to take part in all kinds of public interviews, as well as action in support of the Russian/pro-Russian militants in Donbas.

During the months that Sloviansk was under militant control, it was hard to keep up with the abductions and hostage-taking and there were many cases of torture and killings, as well as extrajudicial executions. At least one mass grave was found after the militants fled, and foreign journalists found ‘death sentences’ signed by Girkin himself, in the abandoned headquarters in the Sloviansk SBU [Security Service] building.  Hostages were held and tortured both in the basement there, as well as in the central police building. The ‘executions’ as per the so-called ‘death sentences’ were carried out in the police investigators’ offices.  The ‘military tribunal’ was made up of militants referred to as “Nos” [Nose], Sedoy [Grey-haired], etc.

Girkin was either lying about the ‘executions’ he reported, or only mentioned some.  31-year-old Oleksy Pichko was ‘sentenced to death’ and shot by firing squad for stealing two shirts and a pair of trousers from a neighbour’s home.  Vitaly Solovyov was 36 when he was arrested in the home he shared with his elderly grandmother, accused of looting and sentenced to death by the same grotesque ‘tribunal’.

One of the most disturbing parts of the Komsomolskaya Pravda program was the way Girkin was introduced to the audience as a “hero of the Russian Spring” who “defended Donbas” as the audience’s ancestors had once defended Russia.   Navalny should have reiterated calls for the man to face trial, not chosen to debate him.