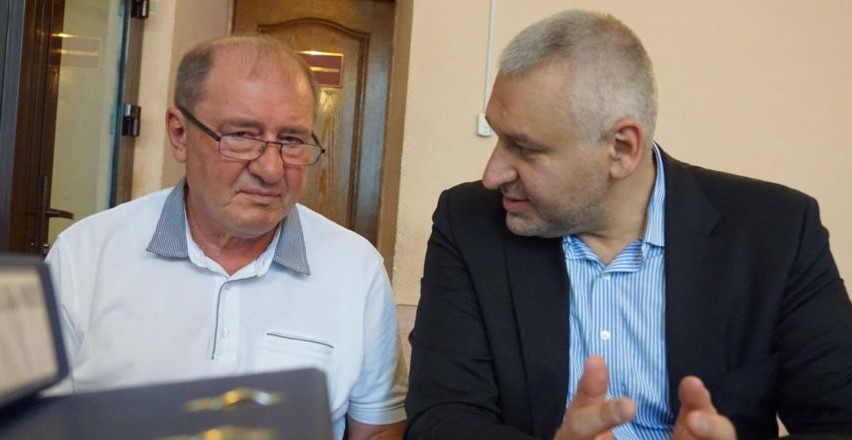 Russia has clearly replaced professional competence with other requirements in occupied Crimea.  A court is, in all seriousness, trying Crimean Tatar leader Ilmi Umerov for supposed ‘separatism’, based on a faulty translation of an interview given in Crimean Tatar.  While the translator is himself a German specialist, the nature of at least one of the mistakes suggests that Umerov’s words were deliberately distorted to enable charges under Article 280.1, the 2014 addition to Russia’s criminal code increasingly used against critics of Russia’s occupation of Crimea..

Under such circumstances, it was evident that the defence would wish to question the translator Saledinov as a witness.  They therefore objected at the sixth hearing on July 12, when the prosecutor, Yelena Artemenko insisted that the translator be present, with this precluding the possibility of later questioning him as witness.  The judge typically went along with the prosecutor, rejecting the defence’s application for Saledinov’s withdrawal from the case (as translator).

Ayshe Umerova explains that Saledinov was asked to translate in court her father’s words from the video recording of the interview.  This proved to differ radically from his written translation, although the style – of adding words that he hadn’t heard – continued.  Amusingly, even the judge objected after Saledinov added that something had happened in Kherson, which had clearly not been stated in the Crimean Tatar original.

This is no mere quibble about whether the translation was, as claimed, verbatim. One insertion is essentially what the prosecution has built this case on.  Umerov was speaking about international sanctions and how these should be strengthened.  It was the sanctions that would force Russia to leave Crimea and Donbas.  The translator added the modal “it’s necessary to”, thus claiming falsely that Umerov had said that Russia must be forced to leave them.

During his translation of the video in court, Saledinov tried to insert the same word, and was pulled up on this.  Umerov asked him to state clearly whether he had heard the word or not.  The question was repeated by the judge, at which point Saledinov replied by claiming – falsely – “that you can put it in, or not put it in”.

Defence lawyer Mark Feygin’s response was swift and to the point: “and you can sentence somebody to five years, or not sentence them”.

Feygin later stated that he is now convinced that the failure to provide a transcript of the actual interview in Crimean Tatar was quite deliberate.  The ‘translator’ has added a word in the text which enabled the FSB to claim that Umerov’s statement had been “a public call to action aimed at violating Russia’s territorial integrity”.

Ivanova’s ‘expert assessments’ are used in two trials underway at the moment: Umerov’s and that of journalist Mykola Semena.  During the last hearing over charges that the 67-year-old journalist also made such ‘public calls’, Ivanova claimed that the use of a modal verb is sufficient to call something a ‘public call to violate Russia’s territorial integrity”.

Sufficient, as Feygin pointed out, to get somebody imprisoned for 5 years.

The defence will be insisting that a new linguistic assessment is carried out, with this being directly from the Crimean Tatar original.

59-year-old Ilmi Umerov was initially detained on May 12 and charged in connection with an interview given to Crimean Tatar TV ATR  on March 19, 2016.  He is accused, according to the indictment, of having “with intent to carry out activities aimed at violating the territorial integrity of the Russian Federation, … deliberately and publicly called on an unlimited number of people to carry out actions aimed at returning the Republic of Crimea under Ukraine’s jurisdiction”.

This is precisely what the United Nations General Assembly, the OSCE’s Parliamentary Assembly, the EU and countless other international structures and leaders have called for.

That in itself makes this trial preposterous, however this is now compounded by the fact that the FSB chose to falsify Ilmi Umerov’s words.