Blogger fined for saying the USSR invaded Poland in 1939 takes Russia to Court in StrasbourgRussia’s Supreme Court rules that the USSR did not invade Poland in 1939Russian fined for reposting that the USSR & Nazi Germany invaded PolandRussia says Poland, not USSR, was Hitler’s Ally and Responsible for HolocaustKremlin-funded Sputnik Int. claims West criticizes Stalin to weaken Russia & its leadershipKremlin’s proxies purge memory of victims of Holodomor and political repressionRussia’s ’new approach’ to Stalin and extended secrecy about his victimsStalin Museum: Putin’s Russia Immortalizes Bloody DictatorAnger and Protest over Stalin Monument in YaltaPortrait of Stalin appears in Russian-occupied CrimeaStalingrad as latest step in re-glorification of tyrantNeo-Nazis in Moscow’s ServicePro-Russian separatists start their own anti-Semitic TV channelPro-Russian, anti-Roma, anti-Semitic and hunting out Ukrainian speakersThe Donetsk anti-Semitic leaflets – what should not be overlookedEast Ukraine crisis and the ’fascist’ matrixRussia continues its false narrative as defender of oppressed minorities in UkraineRussian propaganda claims Jewish organizations supporting Maidan are bringing on "second Holocaust"The Crimean referendum’s neo-Nazi observersPutin’s Neo-Nazi Helpers
• Topics / News from the CIS countries 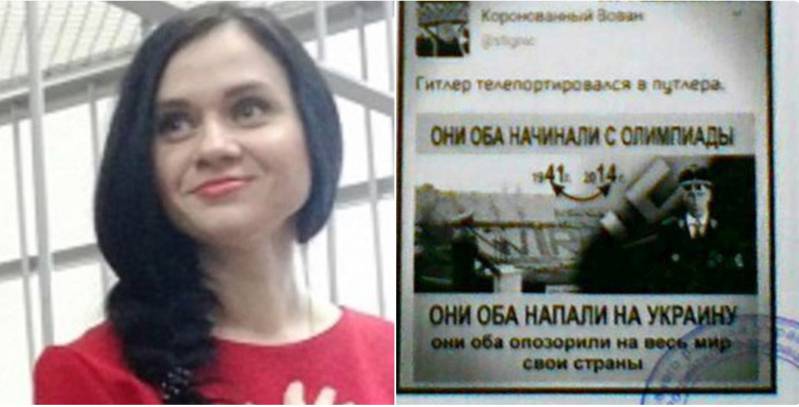 Anti-corruption activist Viktoria Lobova was jailed for three days in Vladimir on July 14 for reposting a picture where Russian President Vladimir Putin is in a Nazi uniform, and is likened to Adolf Hitler.  The reasons:  "Both began with the Olympics”, "They both invaded Ukraine” and “They both shamed their countries before the entire world”.  This is the latest of several examples where legislation prohibiting the public demonstration of Nazi symbols has been used as a repressive measure against critics of the current Russian regime.

The sentence has already been served, however Lobova is certainly planning to challenge it.  She is a supporter of opposition leader Alexei Navalny, and the prosecution for the repost on a social network came after a failed attempt to prosecute her for peaceful involvement in the public walks in protest on Russia Day, on which huge numbers of Russians were arrested.  Even a Russian judge found no evidence of ‘unlawful picketing’ during a hearing on July 4, and acquitted her.

The Vladimir police then decided that the 28-year-old had infringed a number of laws by posting the picture in question on her social media page.  This was supposed to fall under both the ‘Law on immortalizing the Victory of the Soviet people in the Great Patriotic War 1941-1945’ and ‘On countering extremist activities’, which prohibit ‘propaganda or demonstration of Nazi symbols’.  Vladimir judge Yury Yevtukhov chose to agree that the picture contained such ‘propaganda’ and passed a three day sentence (with the article in question envisaging punishment ranging for a small fine to 15 days’ imprisonment).

Russia’s effective censor Roskomnadzor has told local journalists that the use of a swastika is prohibited if there is ‘propaganda of Nazism’.  Both the prosecution of Lobova and earlier cases give grounds for scepticism.  There are no grounds for doubting that much depends on the political message of the repost.  While Lobova was jailed for rightly pointing to both Hitler and Putin having invaded Ukraine, there was no response from the authorities to a defamatory film comparing Navalny with Hitler.

Lawyers from the Russian human rights organization Agora have lodged an application with the European Court of Human Rights over the use of the norms in question.  The lawyers note that courts do not take the context into account and find people guilty who were, in fact, critical of the Nazis.  Typically, the case in question, involving Ivan Horodisky from Penze oblast and Alexei Mandrigel from Krasnodar were also about the men’s imprisonment (10 and 7 days, respectively) for a photograph of Putin with a swastika, which they’d posted on the network.

Rafis Kashapov, a Tatar activist, is serving a three-year sentence for posts on the Internet critical of Putin and especially the invasion of Crimea, with one also comparing Hitler and Putin.

See also: Invasion of Crimea & war against Ukraine lead to prison and attack on free speech in Russia

One of the most insane prosecutions, which is also to be considered by the Court in Strasbourg, was that of Vladimir Luzgin from Perm (Siberia).  Luzgin was first convicted in July 2016 and fined 200 thousand roubles under Article 354.1 of Russia’s criminal code (‘rehabilitation of Nazism’).  The charges pertained to Luzgin’s repost of a text on his VKontakte social network page entitled ’15 facts about Bandera supporters, or what the Kremlin is silent about’.

The prosecution took offence to the following statement:

It was the correct statement of the historical truth that the Soviet Union invaded what was then Poland on September 17, 1939 that was deemed an infringement.  Incredibly, on September 1, 1939, Russia’s Supreme Court upheld the sentence, thus effectively ruling that the USSR had not invaded Poland.

It can safely be assumed that the European Court of Human Rights, where this case is now headed, will take a different view.