Ukraine seeks extradition of aviation enthusiast sentenced by Russia for ‘spying’Warning: A trip to Russian-occupied Crimea could get you jailed for 11 yearsAbduction, mock executions & torture in Russia’s ’trial’ of Ukrainian aviation fanaticFrom Maidan to Torture & Solitary Confinement in RussiaKyiv demands return of Ukrainian abducted & jailed in Russia for ‘spying’ on the InternetTorture most classified: How Russia jails another abducted Ukrainian for ‘spying’Ukrainian abducted to Russia sentenced to 11 years for mystery ‘spying’Russia is killing 73-year-old Ukrainian hostage Yury SoloshenkoRussia sentences 73-year-old Ukrainian pensioner to 6 years for ‘spying’Mystery ’Trial’ begins of Russia’s Elderly Ukrainian HostageWorse than the Cold War: Russia’s FSB torments elderly Ukrainian hostageMoscow’s Kafkaesque ’Ukrainian Spy’ CasesMoscow shouts ‘abduction’ yet holds Ukrainian hostages incommunicadoRussia holds 72-year-old Ukrainian hostage on absurd spying chargesRussian mother of 7 stands by her warning about Russian soldiers in UkraineRussian Mother of 7 accused of ‘treason’ released from custodyRussians call to release mother of 7 accused of revealing ’state secrets’Russian woman charged with ‘treason’ for reporting soldiers sent to UkraineRussian Newspeak: “Killed at exercises on the border with Ukraine”Russian soldiers’ deaths in Ukraine: A web of lies and fake social network pages
• Topics / News from the CIS countries 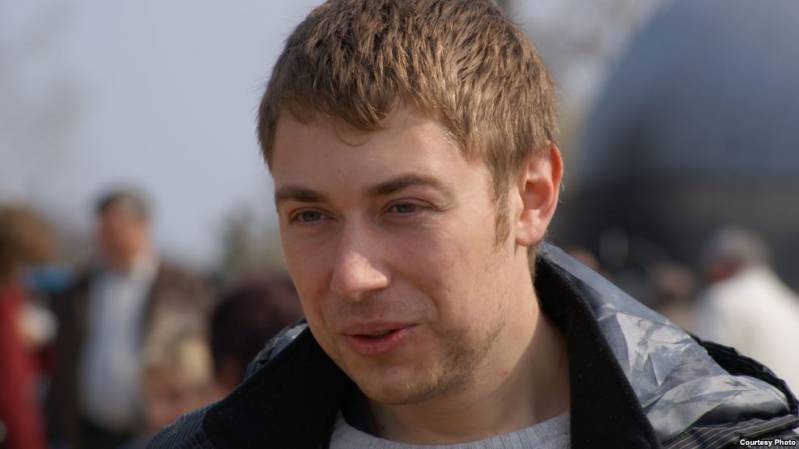 Russia’s FSB may well consider the ‘trial’ and 11-year prison sentence passed on Ukrainian aviation enthusiast Valentyn Vyhivsky to be one of their successes.  Other Ukrainians have also provided ‘confessions’ while held for long periods incommunicado, but they have later had real lawyers and a chance to expose the lack of any evidence and use of torture.  In Vyhivsky’s case, virtually nothing was known about him until after the 11-year sentence, and to this day it remains largely unclear what his ‘spying’ was supposed to entail.

Vyhivsky is turning 34 on August 3, almost four years after he was first taken prisoner.  He has not seen his small son since then.

Vyhivsky was seized at Simferopol railway station on 17 September 2014 by armed paramilitaries who presumably handed him to the FSB.  He was taken against his will to Russia where he was held incommunicado for eight months, without a proper lawyer or contact either with the Ukrainian consul or his family.

Why hold a man incommunicado for eight months if you have strong evidence of a crime committed?  That and the fluid charges give stromg grounds for suspecting a lack of any substance to the charges.

Vyhivsky, who had graduated from the Electronics Faculty of Kyiv Polytechnic, had been fascinated in aviation since childhood and spent a lot of time on the Internet chatting with other enthusiasts, many of whom are in Russia. It is possible that one of the enthusiasts, fearing that they could be accused of suspicious contact with a Ukrainian, and one who had taken part in Euromaidan, could have themselves ‘reported’ him. His arrest and that of several other Ukrainians in 2014 coincided with Russia’s military aggression against Ukraine and virulent anti-Ukrainian propaganda in the media.

According to Petro Vyhivsky, his son was only allowed a visit from the Ukrainian consul after eight months, and then in the company of two guards who immediately stopped them if they tried to talk about anything but ‘neutral subjects’.  The same thing happened when his mother was allowed a visit after nine months.  He managed to tell her only that “they know how to persuade you”.

Halyna Vyhivska has since been allowed proper visits, and more details are therefore available, although Valentyn has asked his parents not to divulge some information for safety reasons.  Some of the scars from the methods of ‘persuasion’ are still visible, and Vyhivsky has told his mother (and probably the lawyer) that he was taken to a forest where he was subjected to two mock executions and other forms of torture.

Petro Vyhivsky reports that his son is still being held in solitary confinement, with the cell so cold during last winter that two of the walls were iced over.  He was put in another cell in the Spring, and with another prisoner, but that was only for 1 month.

He knows of particularly brutal forms of ill-treatment such as when his son was ‘forgotten’ while on his daily period outside the cell, and left for three hours with the temperature at -40.

When it first became clear that he was being held in solitary confinement, local human rights monitors from the Kirov oblast suggested that it could be for his safety since there are prisoners in the prison who were involved in the fighting in Donbas.

The other side of the coin is that Moscow needs to ensure that former fighters do not provide Vyhivsky with important information about the undeclared war that Russian is waging in Eastern Ukraine.

Russia has not responded to Ukraine’s request, lodged back in February under a bilateral agreement, for Vyhivsky to be extradited to Ukraine.