Is President Poroshenko turning to selective stripping of Ukrainian citizenship?Poroshenko law could strip huge numbers of Ukrainians of their citizenshipUkrainian citizens are now a group at risk in Russian-occupied CrimeaRussia backtracks over Ukrainian citizenship in CrimeaRussian, or else: On how Russia is foisting its citizenship in CrimeaCrimean Tatars and others face citizenship dilemmaRussian methods: Calls for Crimea’s return to Ukraine could get you imprisonedMGIMO historian fired for article comparing Crimean annexation to Hitler’s AnschlussInformation channels at warDonetsk Front in Putin’s Dirty WarScurrilous rumours used to spread fear and distrust in Eastern oblastsAutoMaidan activist shot at near ChongarRussian troops already deployed in mainland UkraineThe Crimea is our Home: Get your troops out!Crimean "referendum" a grotesque farceCrimean Tatars call on all Crimeans to boycott "referendum"Avoiding Ukraine’s language minefieldsChief Rabbi and others dismiss Putin’s “anti-Semitic extremist” claimsRussian propaganda must be challengedWestern Media: Don’t distort the situation in Ukraine!
• Topics / Politics and human rights 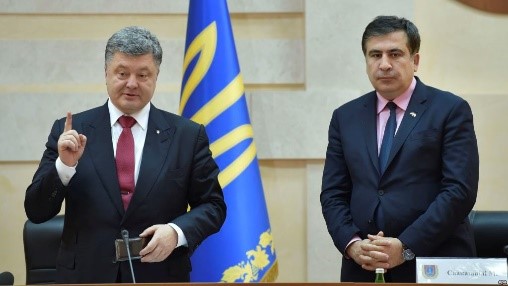 The official reason why Mikheil Saakashvili has been stripped of the Ukrainian citizenship he was ceremoniously granted in May 2015 is that he concealed criminal proceedings against him in his native Georgia.  The move comes shortly after President Petro Poroshenko visited Georgia and two days after the President changed the composition of the Committee on Citizenship whose opinion is supposed to form the basis of his decisions.

The news also broke while Saakashvili is in the United States.  Since Georgia stripped him of his Georgian citizenship in December 2015 because of his having taken on Ukrainian citizenship, it is possible that the former Georgian President and ex-Governor of the Odesa Oblast will apply for political asylum in America.  According to media reports, Saakashvili has an arrest warrant hanging over him on the ominously loose charges of exceeding his powers back in Georgia, which means that if he does apply for asylum, he may well get it.

This can hardly do Ukraine’s reputation any good.  Nor can any of the Ukrainian and international media reports.  Reuters has noted that the move against Poroshenko’s one-time ally spells the end of his political aspirations in Ukraine and points out that the party Saakashvili formed after bitterly criticizing Poroshenko and resigning from his governor’s post in December last year is lobbying for early elections.  Draw your conclusions.

The Migration Service has produced a statement giving the official grounds for the move, and asserting that it was taken after information was received from Georgia and considered by the committee on citizenship.

Few commentators in the media and social networks seem convinced.  Mustafa Nayyem may be an MP in the Bloc of Petro Poroshenko, but pulls no punches in calling this the stupidest thing the President could have done.  The only thing more idiotic, he continues, was the imprisonment of the leader of the opposition Yulya Tymoshenko under ex-President Viktor Yanukovych.

One problem with the information that Saakashvili purportedly concealed is that it was fairly publicly known that there was a cloud over him in Georgia.  If the Georgian authorities have now revealed something else, then one wonders why they are not seeking his extradition.  If that is now a problem, as they removed his citizenship, what is Ukraine doing turning a person invited to help in Ukraine’s reforms into a stateless person?

Radio Svoboda reports that on July 26, a Ukrainian court issued an arrest warrant against former Kyiv Mayor Leonid Chernovetsky who later gained Georgian citizenship and even stood for election in the Georgian parliament.

This is not the first controversial move depriving people of their Ukrainian citizenship.  In early May, it was learned that controversial MP Andriy Artemenko had also lost his citizenship, with the grounds given in his case, and that of Sasha Borovik, being that they held dual nationality which is in theory illegal, but widely held in Ukraine.  The two cases were very different, but both of concern.

Artemenko was very widely criticized in February this year after being named in a New York Times article entitled A Back-Channel Plan for Ukraine and Russia, Courtesy of Trump Associates.  Artemenko was described as one of US President Donald Trump’s connections in Ukraine, who was proposing a ‘peace plan for Ukraine and Russia’ which would give Trump a way of lifting sanctions against Russia.

According to the report, Artemenko, “who sees himself as a Trump-style leader of a future Ukraine, claims to have evidence — “names of companies, wire transfers” — showing corruption by the Ukrainian president, Petro O. Poroshenko, that could help oust him. And Mr. Artemenko said he had received encouragement for his plans from top aides to Mr. Putin.”  Hardly surprising if it proposed a referendum on whether Crimea would be “leased to Russia” for 50 or 100 years.

Any so-called ‘peace plan’ is unacceptable to Ukraine, and Artemenko was promptly expelled from his party.  A criminal investigation was later initiated on suspicion of treason, and then he was stripped of his citizenship which, of necessity, meant that he also lost his post as MP.  He asserted that he did not have Canadian citizenship.

The situation with Sasha Borovik is more akin to that with Saakashvili in that Borovik was also initially invited to Ukraine.  He told Radio Svoboda that he had come in 2015 as a member of the Ukrainian Diaspora and citizen of Germany, following negotiations between himself, Germany and the Ukrainian government.

He had not taken on another country’s citizenship after becoming a Ukrainian citizen, which is one of the grounds in the Constitution for a person losing their citizenship. He had simply not renounced his German passport, which everybody was doubtless aware of back in 2015.  In 2017, that was used as a weapon against him.

The grounds in all three men’s cases can be used – or not – against many other people as well.