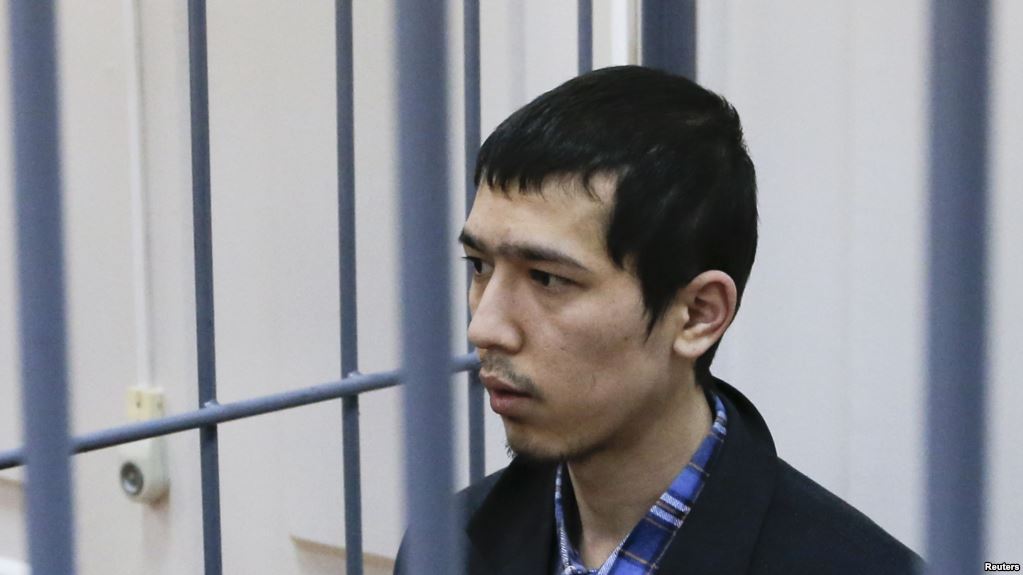 Abror Azimov is one of two brothers accused of involvement in a deadly subway bombing in St. Petersburg that killed 16 people, including the bomber.

The suspects, Akram and Abror Azimov, claim they were subjected to electric shocks, simulated drowning, and beatings at the facility allegedly used by Russia's powerful Federal Security Service (FSB), according to an appeal to federal authorities filed by their lawyers earlier this month.

"All of the torture was accompanied not only by dictated testimony, but also threats of reprisals against [his] children and wife," Olga Dinze, the lawyer for Akram Azimov, said of her client in an interview with RFE/RL’s Russian Service.

Dinze's husband, lawyer Dmitry Dinze, is representing Abror Azimov in the case. She said that they had not yet received a reply to their July 7 appeal to the Russian Prosecutor-General’s Office, a copy of which has been seen by RFE/RL.

The allegation that the suspects were tortured at a so-called FSB black site near Moscow was first reported on July 24 by the Russian news site Republic.ru, which said other terror suspects in Russia previously claimed that they faced similar abuses in a facility resembling that described by the Azimov brothers.

The FSB did not publicly comment on the allegations, and its press office could not immediately be reached by telephone on July 25. An e-mailed inquiry by RFE/RL went unanswered.

Investigators say a 22-year-old suicide bomber named Akbarjon Jalilov carried out the April 3 attack in St. Petersburg that killed 15 people and injured 45 others.

Like Jalilov, the Azimov brothers are ethnic-Uzbek Russian citizens born in Kyrgyzstan.

The FSB said Abror Azimov, 26, was detained on April 17 and accused of having "trained the suicide attacker."

But the appeal from the brothers' lawyers claims Abror was detained a day after the subway bombing and held for nearly two weeks in the "secret jail" prior to that announcement.

News of Akram’s arrest came on April 19, when officials from the Russian Investigative Committee said he had been apprehended in Moscow and that he was armed with a hand grenade at the time of his arrest.

Russian news agencies broadcast footage provided by authorities showing what they described as Azimov's arrest. The video shows a man sitting at a bus stop being roughly detained by men wearing FSB jackets.

But Akram’s mother told RFE/RL two days after the April 19 announcement that he had been taken away by Kyrgyz security officers on April 15 from a hospital in the city of Osh, where he was being treated after surgery.

A staff member at the Osh hospital confirmed to RFE/RL that Akram had undergone sinus surgery at the facility and that several men wearing civilian clothing had taken him away after handcuffing him on April 15.

In their appeal to prosecutors, the brothers’ lawyers allege that Akram was taken directly from Moscow’s Domodedovo Airport to the purported "secret" facility and tortured for several days prior to the official announcement of his arrest.

Olga Dinze claimed in her interview with RFE/RL that the video showing Akram's alleged detention was staged.

Abror, who authorities say organized the attack, was allegedly subjected to torture for more than three days, including electrical shocks to his genitals, according to the appeal by the lawyers. Both men provided testimony that they believed would end the alleged abuses, the document claims.

Earlier this month, a Moscow court ordered their clients to remain in custody until mid-September. Several other suspected accomplices, also of Central Asian origin, are in custody as well.

With reporting by RFE/RL’s Russian and Kyrgyz Services, Republic.ru, and Interfax